Theatre Review: ‘Matilda the Musical’ at The Kennedy Center 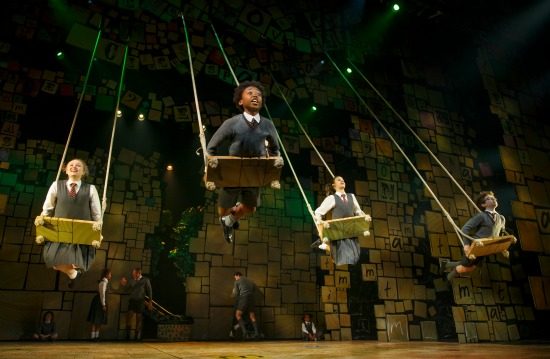 “When I Grow Up” – The Company of Matilda The Musical National Tour. Photo by Joan Marcus.

Has anyone ever made you feel oh so small? Or told you to put down that book because it’s a waste of time? Ever been called a boy when you’re a girl? If you’ve answered yes to any of these questions, Matilda the Musical is the musical for you!

Matilda Wormwood (Mabel Tyler) is a miraculous little girl. Bullied and denied her identity as a girl, of all things, by her self-absorbed parents, Matilda takes asylum in her local library where she tells stories to the librarian, Mrs. Phelps (Ora Jones). When her father (Quinn Mattfield) enrolls her at Crunchem Hall Elementary, Matilda quickly runs afoul of Headmistress Agatha Trunchbull (Bruce Ryness). Her only refuge is her soft-spoken and sympathetic teacher, Miss Honey (Jennifer Blood). Astounded by Matilda’s bookish intellect, Miss Honey tries in vain to nurture Matilda’s enthusiasm for learning only to face ridicule and rejection from every adult in Matilda’s life. Buoyed by Miss Honey and the spirit of righteous rebellion, Matilda soon discovers a way to fight back because “if it’s not right, you have to put it right!” Matilda isn’t the only defiant child at Crunchem Hall Elementary. Big props to Bruce (Evan Gray) and Lavender (Charlie Kersh), who perpetrate their own amusing, if less astounding acts of rebellion.

Tyler is a wonderfully confident Matilda. Her singing voice is clear, her tone is focused, and she is easily understood. Her opening number “Naughty” is one for all neglected and dejected children out in the world and it is dazzling watching the ease with which Tyler comfortably scales the set. Tyler’s energy level never drops and she sits comfortably in the spotlight. It would be a pleasure to see what the other two alternates for Matilda, Tori Feinstein and Gabrielle Gutierrez, would bring to the role.

Mr. Wormwood is a walking, talking car-dealer stereotype. An atrocious, flamboyant man, he insists his daughter is a boy, tosses her books in the trash, and delivers her to the hands of the sadistic Headmistress Trunchbull. Mr. Wormwood is simply the most hilarious character in Matilda the Musical. Stupid, tacky, and shallow, Mattfield’s Wormwood appears at the beginning of Act II to implore the audience to guard their children from the perils of books and sings “Telly,” a heartfelt love song to his television. Mattfield’s all or nothing portrayal of a self-absorbed and neglectful father is parody that reads larger than life.

Bryce Ryness (a man, if you’re curious) is a suitably butch Miss Trunchbull. Towering and intimidatingly chesty, Ryness’ super muscular legs are on display. Ryness is spotlighted in “The Smell of Rebellion,” tumbling through the air with the greatest of ease, he belts like a rock star. Cassie Silva’s Mrs. Wormwood is just plain mean and oblivious and it is fun to watch her indulge her character’s passion for dancing. Blood is a simply lovely Miss Honey, every bit as timidly courageous as the Miss Honey I remember from the book. The entire cast of children is astoundingly professional and gifted. “When I Grow Up” and “Revolting Children” showcase the cast of children as they learn to be brave and revolt against the adversity of childhood.

Set and Costume Designer Rob Howell keeps the costume design simple and reminiscent of the 1996 film, Matilda. The set is large and complex, featuring high walls of stacked block letters that rearrange themselves throughout the performance. The walls slide and interlock to create the illusion of libraries, classrooms, and living rooms and cast members move freely up and down the walls. Director Matthew Warchus, Illusionist Paul Kieve, and Lighting Designer Hugh Vanstone have created an experience that is straight out of a creative child’s resourceful mind.

Undeniably, Matilda the Musical is fun, fun, fun for all, big and small. Tim Minchin’s rockin’ music and lyrics are clever and catchy, they’ve been stuck in my head for days, and book-writer Dennis Kelly has kept close all the very best parts of Roald Dahl’s beloved classic. Without a doubt, the cast of kids is the best part of Matilda the Musical and, happily, they are featured most prominently.