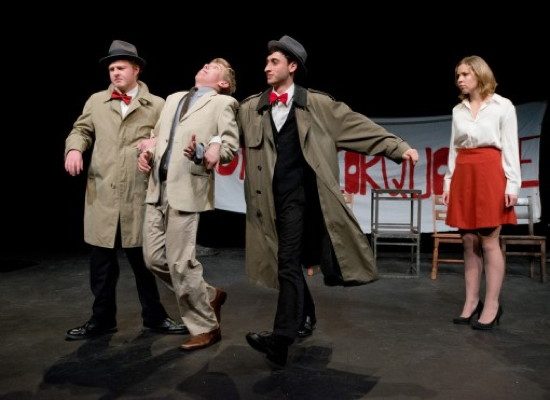 They say slapstick is dead. But if they would have seen the Tawes Theatre at Washington College Saturday night, they would concur. The 39 Steps is a melodrama play adapted from the 1915 novel by John Buchan and the 1935 film by Alfred Hitchcock. The play comes from playwright Patrick Barlow, who adapted it from the previous works, as well as the concept and production of a four-actor version of the story from Simon Corble and Nobby Dimon.

This play is performed with only four actors. One playing the main character, Richard Hannay, one plays the three women with whom Richard finds romance with, and two other actors who play every other character in the show: whether its heroes, villains, men, women, children and even the occasional inanimate object. The play itself is a mystery drama that adds in comedic timing, and gags throughout its story.

In The 39 Steps, Richard Hannay, a man with a boring life meets a woman with a thick accent who says she’s a spy. When he takes her home, she is murdered. Soon after, a mysterious organization called “The 39 Steps” is hot on his trail in a nationwide manhunt to convict him for a crime he did not do. Mixing in the comedy styles of Monty Python and some Hitchcock references, and you have a play that will leave you with tears in your eyes (from laughing so hard).

Washington College senior Sean Syme directed this play as his senior thesis; and what a phenomenal job he does. The theatre is somewhat in the round, with seating all around the front and sides of the stage. His direction on such a small stage and with minimal set, left some room for artistic direction. With a minimal set, he included big actions that filled the whole stage and made the atmosphere seem bigger. His casting choices also made the show.

Richard Hannay was played by WAC freshmen John Leslie, in which he fit the role perfectly. With his wit and charming good looks, he had the perfect traits for Richard Hannay.  Richard’s lovely ladies of the show were all portrayed by senior Jesse Sengstacke. She brought beauty and humor as well as various accents to the role. Even when she got stabbed in the back (Literally. Spoiler Alert), she brought a sexy humorous way of portraying it. Now onto the two guys who stole the show, playing a range of 20 characters each, switching within roles almost every 60 seconds. Characters ranging from bumbling detectives to old Irish women.  These two guys, Junior Nate Krimmel and freshmen Colin Higgins both brought the roar of laughter to the theatre every two minutes, which is an achievement in my book.

You could tell these actors worked hard on this show. Through all of the costume changes, lighting cues and background sounds, this show flowed nicely and was put together well. All in all, I am glad I was able to see such a hilarious and suspenseful show on the eastern shore.

The play ran from December 3rd  through December 5th 2015. The Tawes Theatre is located in the Gibson Center for the Arts at Washington College in Chestertown, MD. Click here for more information on their theatre department.