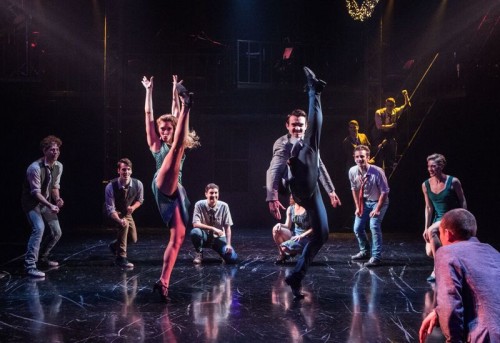 The much anticipated Signature production of West Side Story has arrived, and it is a rumble with nary a stumble. Signature has a deserved, mostly favorable rep for doing shows big. They rarely spare the razamatazz. In this instance the show is in control—it is big from the inside out.

Casually bandied about in theatre circles as the best musical ever, WSS is solidly in my top 5. Ok, maybe top 3.

So, as a New Yawker would say, what’s not to like? With groundbreaking advances in dance and music, including ballet and latin/fusion movement driving the action, and an astounding score that features soaring ballads and rousing uptempo numbers that knock your socks off, West Side Story breathed needed life into a medium that, by the late 50s had not seen an original turn in a long time. Add in an unusual urban setting, an achingly happy-sad story that grips you and doesn’t let you go, it pretty much has everything and then some.

… it is a rumble with nary a stumble.

When it burst upon the scene, the creative team of Arthur Laurents (book) Leonard Bernstein, (music)  Stephen Sondheim (lyrics) with choreography by Jerome Robbins, were a look back who’s who of talent in and of themselves. In restaging the story of Romeo and Juliet to the inner city, the show won acclaim and the ensuing film won best picture, further cementing the show in the minds of theatre lovers as a masterwork.

Ok, Signature, no pressure here. Thankfully, this production stays close to its roots, adding nice twists that enhance the pacing of the story. It has been described as a danced narrative, and the setless thrust stage allows the dancers, especially in their opening number to in effect fully become the set. Not using the standard kit for NYC streets, the elevated stage catwalk is used for alleys and fire escapes.

In the classic Prologue, we see the artistry of this truly ensemble cast of dancers interact as rival gangs. This is when the show starts to crackle. We soon meet the leaders of the Jets and Sharks, Riff (Max Clayton) and Bernardo (Sean Ewing). Both are nimble performers with catlike qualities onstage. Clayton has the more vocal role in song and in portraying the zeal of the Jets, and together their climactic fight scene is mesmerizing.

The connection between young lovers Tony and Maria has to happen fast—they are essentially swept up into each other in a single moment—and they handle it well. The character of Tony is the most thankless in the show. As written, he must be charming, witty, a dreamer, and an ex-gang member with a heart of gold who is able to cause bodily harm. Austin Colby’s Tony is effortless onstage, and aside from some unsteadiness in octave change, handled the material well, especially in the upper register, a soft tenor.  His “Something’s Coming” and “One Hand, One Heart” highlighted his range. Such a nice looking delivery boy!

That goes for the rest of the cast, a nimble group of 20 and 30 somethings. One wonders how this assortment of perfectly proportioned people out of central casting would be come juvenile delinquents. Visually it lacks some of the gritty realism I would like to see, but it is a fine balance. One exception is Ryan Fitzgerald as Action, who embodies the angst of the streets in unbridled outbursts. His outstanding work was also seen in “Officer Krupke,” infusing the song with hilarious asides. Signature vet Bobby Smith lent his services as kindly Doc, the soda shop owner who gave perspective to the gang’s life on the street.

But in the end this story is really about Maria. A new immigrant, she has too much of life and loss flash before her eyes and still she keeps her humanity.  MaryJoanna Grisso as Maria is a spritely performer who, even as a WSS veteran, pours herself into the role as if seeing Tony for the first time. Her delicate soprano fit her character, and her rendition of “I Feel Pretty” was a treat. Lest we forget Natascia Diaz who can play Anita in her sleep.  Great comic timing and an uproarious “America.”

The musical accompaniment by Jon Kalbfleisch consisted of a 17 piece orchestra, which is the only way West Side Story should be performed.  Hearing horns and violins, unamplified, without unneeded bass, is a treat.

Director Matthew Gardiner and his production team have given us a show to truly remember, a mark of respect for a classic. Choreographer Parker Esse showed the hard work paid off, even if using the original dance routines, it still had to fit the venue and the performers. The fight choreography was both realistic and artistic. Jason Lyon’s lighting design lit the stage fully while creating an island of darkness for the audience.