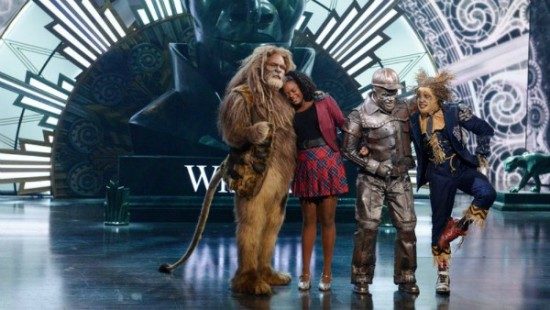 David Alan Grier as the Cowardly Lion, Shanice Williams as Dorothy, Ne-Yo as the Tin Man and Elijah Kelly as the Scarecrow. Photo courtesy of NBC.

For the past two years, NBC has attempted to create a holiday television event by airing a star-studded live musical in prime time. 2013’s The Sound of Music LIVE won the ratings game – over 18 million people tuned in to watch Carrie Underwood as Maria – but it was skewered critically. Last year’s Peter Pan LIVE faltered on both fronts: it tanked dramatically in the ratings and received more attention for Christopher Walken’s bizarre turn as Captain Hook than anything else. Yet, as the adage goes, the third time’s a charm. Thursday night’s broadcast of The Wiz LIVE with Book by William F. Brown and Music and lyrics by Charlie Smalls, finally hit pay dirt with an excellent production that realizes the full potential of this concept.

Directed by Kenny Leon, there were several winning elements of The Wiz LIVE, beginning with the casting. Vocally, this was the strongest cast yet. It’s no surprise that the R&B heavyweights like Queen Latifah, Mary J. Blige and Ne-Yo delivered powerful numbers, but they also demonstrated compelling stage presence in their roles. Latifah isn’t new to the musical theatre genre and it shows; she navigated the traditionally masculine part of the Wiz with confidence and convincing bravado. As the Wicket Witch of the West, Blige created an iconic moment by commanding her show-stopping solo “No Bad News.” Ne-Yo’s Tin Man flawlessly incorporated his character’s stiff, jerky movements into the choreography by Fatima Robinson and he sung “If I Could Feel” with wistful longing to tender effect.

Elijah Kelly as the Scarecrow arguably had the biggest shoes to fill, as this was the role played so charmingly by Michael Jackson in the 1978 film version of The Wiz. Not only did Kelly do a wonderful job of embodying the vaudevillian physicality of the character, he echoed the endearing naiveté that made Jackson’s portrayal memorable. It was a stroke of casting genius to feature Stephanie Mills as Auntie Em. Mills played Dorothy in the original Broadway run and it’s a genuine pleasure to discover that her distinctive voice is still in top form. While these pros rightfully deserve their accolades, the big revelation is Shanice Williams, the 19-year-old newcomer from Rahway, NJ who won the role of Dorothy from an open audition. Ms. Williams may not have the pedigree or career longevity of her co-stars, but if Thursday night’s performance is any indication, she radiates star quality and will be part of that club soon enough. Despite her tone getting slightly shrill at moments, her instrument has wonderful promise and it will be exciting to see how it continues to mature, develop texture and evolve in the future.

Smart direction choices such as when to cut to commercial break (of which there were many, unfortunately) were much more logical and less interruptive than they were with NBC’s previous attempts. Most noticeably, The Wiz LIVE managed to overcome the most problematic feature of the live TV format – no real time reaction from a live in-studio audience – better than either of its predecessors. The fun, lively energy that this show sustains goes a long way toward reducing the awkwardness of hearing no laugher or applause, each of which is so critical to feeding the spark that make live shows exhilarating to watch.

Along with the stellar cast, the costumes by Paul Tazewell and sets by Derek McLane were of top-notch quality!

This is not to say that there were no opportunities for improvement. The Wiz has always suffered from weak transitions and this production was no exception; pacing would have been better with a 15-minute reduction in running time. The opening scenes before Dorothy lands in Oz are necessary but painfully slow, and the human “tornado” was the most obvious staging misstep of the night. Additionally, some of the camera work appeared a bit wobbly at times. It’s a testament to the overall strength of this production that the audience soon forgets these transgressions once the otherworldly adventure begins.

The impact that The Wiz LIVE will have on the future of the live musical broadcasts cannot be understated. NBC now has a workable template for how to believably harness the magic of live theatre for the masses, but to ensure it continues to flourish, the network should experiment more in its attempts to expand the elements that make the components of viewing a performance in real time such a compelling form of entertainment.

Recommended for all ages.

The Wiz LIVE was performed at Grumman Studios in Bethpage, NY and aired live on NBC on December 3rd, 2015.  The program will be repeated on NBC, on Saturday, Dec. 19 at 8 p.m.