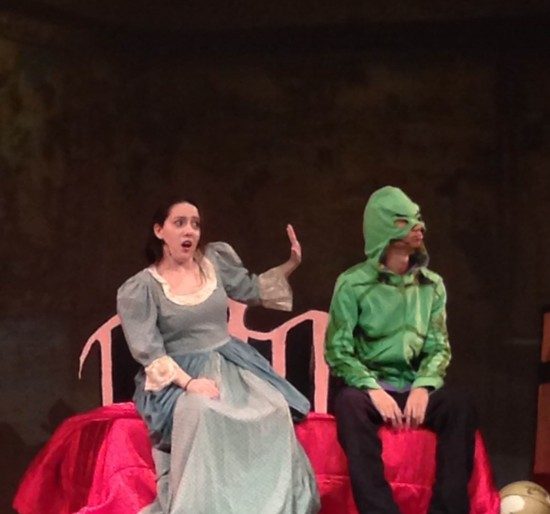 Humanity has long relied on the fairy tales of old to give us what we all crave: happily ever after. But what if that happily ever after wasn’t always quite so happy, and what if there was a common thread stringing our most beloved tales together? If this is what you happen to be looking for, look no further than Northwood High School’s furiously fast-paced production of The Brothers Grimm Spectaculathon.

Published in 2007 and written by playwright Don Zolidis, The Brothers Grimm Spectaculathon quickly became a staple among high school and community theatre groups. The play is noteworthy for its comedic interweaving of both well known and obscure Brothers Grimm fairy tales such as Cinderella and The Devil’s Grandmother, its audacious smashing of the fourth wall, and its lively incorporation of audience interaction.

The production’s greatest boons were its high energy, strong characterization, and cohesive ensemble work. From characters with one line to the principal roles, nearly every actor took advantage of their stage time, creating distinct and memorable characters. The actors also incorporated the audience in an effective and non-distracting manner.

Emily Tartaglia and Simon Enagonio were delightful as Narrators 1 and 2, respectively. Both helped keep the sometimes frenetic production grounded and offered an ever present and humorous backbone to the production. The pair was effective both as a cohesive ensemble and as individual actors. Enagonio created a wildly enthusiastic, mildly oafish, and oddly endearing character, and often had to be reigned in by Tartaglia’s more focused, but still lovably charming demeanor.

Several featured actors gave laudable performances in their roles as the Brothers Grimm fairy tale characters. Ricardo Chicas was a standout as the Prince, the Devil, and Hansel. His lovable, enchanting portrayal of the Devil would make anyone want to make a deal with him. As the charming and handsome Prince, Chicas made it certain that the audience would fall in love with him along with Rapunzel. With his characterization of the impressionable Hansel, Chicas took a page out of the after school special playbook, hilariously imploring his sister to succumb to peer pressure. Blake Johnson was simultaneously humorous and harrowing as the archetypal Enchantress. Armed with a vendetta against the patriarchal constraints of society and a devotion to new wave feminism, Johnson’s portrayal of the oft-maligned Enchantress offered a new, comical twist on why she is so protective over Rapunzel.

Despite lengthy set transitions, the minimalistic set generally complemented the unconventional nature of the play. One highlight of the set design was the use of the pit to create the illusion of actors falling to their death.

The outlook was anything but grim on Northwood High School’s awesomely offbeat production of The Brothers Grimm Spectaculathon.