News: Trisha Yearwood Talks to Fans and MD Theatre Guide about Her Cookbook and Concert Tour 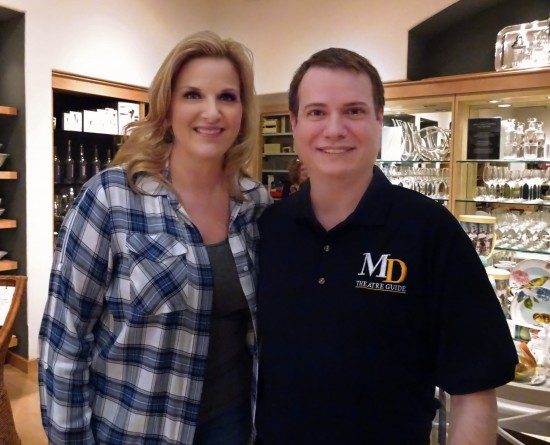 Two hundred fans gathered by the Williams-Sonoma at Towson Mall in order to meet Trisha Yearwood who is in town performing with her husband Garth Brooks.  This is the first tour that both have shared the stage together.

Besides being a country music star, Trisha Yearwood has her own show on the Food Network called Trisha’s Southern Kitchen and is a best-selling cookbook author.  Her first best-selling cookbook, named Georgia Cooking in an Oklahoma Kitchen (Clarkson Potter), was first published in 2008. Her second book, Home Cooking with Trisha Yearwood (Clarkson Potter), followed in 2010. Both books reached the #1 position on the New York Times best-seller list in the Advice, How-To and Miscellaneous category. Trisha’s Table is the name of her third cookbook.

Her guests at the book signing got to sample her recipes, including a tasty chicken kebab and no-bake peanut butter pretzel squares, and slow cooker Georgia pulled-pork barbecue.

Trisha Yearwood was genuine, personable, and appreciative of each and every one of her guests.  Nobody was rushed and she even took the time to pose for photos with fans, including me; and I haven’t stopped smiling since.

I told her how my father makes her pot roast recipe all the time and how we enjoyed it as recent as last week.  She was instantly connected to her mother who she said “would have been proud to hear that. We enjoyed our mother’s pot roast every Sunday and it is one of my favorite dishes.”

When asked what is her favorite recipe from her book she said, “It all depends upon what I am in the mood for.” The book promises to include her “feel-good favorites for a balanced life.”

Trisha Yearwood says that she loves to cook but “singing fills my soul.”  She went on to tell me that “It is awesome” that she gets to perform with her husband, Garth Brooks.

The five sell-out concerts at the Royal Farms Arena in Baltimore is sure to make concert history.  Before I catch their final concert, I think I will try to make her recipe for cinnamon orange rolls.

Enjoy the video version of this article below.