Theatre Review: ‘Between Riverside and Crazy’ at Studio Theatre 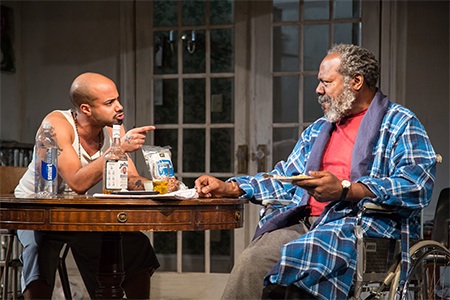 Sean Carvajal and Frankie R. Faison in Between Riverside and Crazy at Studio Theatre. Photo by Igor Dmitry.

Once again Studio Theatre has taken on an edgy, exciting, and slightly uncomfortable play with its production of Stephen Adly Guirgis’ Between Riverside and Crazy. This 2015 Pulitzer Prize winning show is rowdy, rollicking, and throws some timely punches that leave you reeling.

Set in the neighborhood of NYC known as Riverside, the story revolves around a disgruntled and oddly lovable ex-cop known as “Pops,” (Frankie R. Faison) who, in addition to facing eviction from his amazingly rent-controlled apartment, is still processing the death of his wife; attempting to manage his questionably shady son (along with his son’s live-in girlfriend; nurturing a former felon; and coughing up cookies for an uptight “church woman.”)

Where this combination of characters would already make for an interesting story, it becomes super-charged for audiences today with Pops’ backstory–being a black, NYC cop who got shot 6 times (“oomf, oomf, oomf, ooomf, oomf, oooompf!”) while off duty by a white cop “shouting the n-word.” And no, this play was written in early 2014, before the harrowing stories of police-related violence and racism rose to the surface this past year.

Not a show for the weak minded, Between Riverside and Crazy has about as few eff’s to give as Pops, and it lets loose with lighting quick dialogue, quick wit, and distressingly realistic moments. Not everything stays as seen upon first glance, and perhaps the most delightful aspect of the weighty play is the unpredictability of the story, leading you down familiar paths and into revelation.

This show certainly deserves a lot of praise, from the spot-on costuming and set designs to the unobtrusive, accentuating lighting and music, to the force of the actors themselves. Faison’s vivid portrayal of Pops brought life and depth to his curmudgeonly character as he dealt out justice, mercy, and a whole lot of words from his deceased wife’s wheelchair. Emily Townley and David Bishins as the good cop/bad cop formed a dynamic duo, teaming up to talk Pops into a settlement for his old (but still festering) wound. The presence of both cops as well as that of the jittery, impressionable Oswaldo (Sean Carvajal) provide much of the active tension that at some points may have you wincing and flinching in your seat. That still leaves the vivid characters of Pops’ son, Junior (Bryant Bentley), the girlfriend, Lulu (Jasmin Tavarez), and the church lady (Christina Frias).

While the actors could strengthen their handle on lines a bit more, there is no questioning of the talent or the passion present in each and every cast member. Guirgis may yet have some work to do on crafting believable and less unfortunately portrayed female characters in future works, but there can be no doubt that this is a play that tries to search the hearts of all its characters and find the beauty in each. Gritty, painfully poignant, and deeply human, Between Riverside and Crazy takes a little bit of real life and creates a reflection whereby we can all see ourselves and the world a little more clearly–and hopefully, it will challenge us, too, to take our piece of the sky and make ourselves a little bit better than we were before.