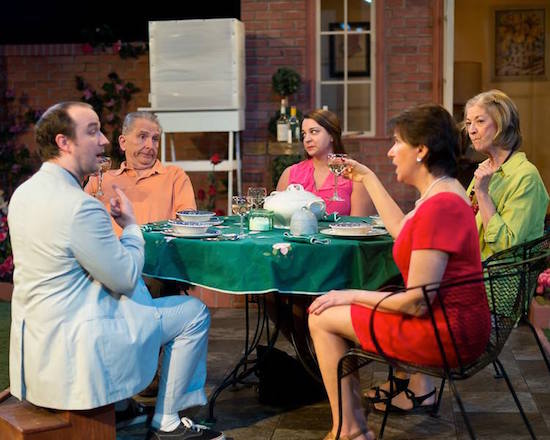 No pun intended, but the water main brake near Silver Spring Stage on January 9–causing heavy traffic delays and a late curtain at the performance–did not dampen the enthusiasm of the audience.

Perhaps the bucolic garden setting in Charlotte Jones’s Humble Boy helped ease everyone’s tension, although, to be sure, the familial happenings there are anything but peaceful.

The term “dysfunctional family” comes to mind, except with a twist: the warring factions consist of only one parent and one child.

Felix Humble, an astrophysicist more comfortable with stars than people, returns to his English country home after the death of his father, James. Also a scientist, James had a passion for bees his wife didn’t understand. In any case Flora got rid of them precipitously along with everything else he owned.

Flora, a desirable but self-involved woman, is in turn angry at Felix for running away when it was his turn to speak at his father’s funeral. On top of all that, Flora intends to marry George, a man Felix doesn’t like. And then there is Rosie, Felix’s ex-girlfriend, who has a surprise for him.

In the end love between parent and child (and that has more than one meaning here) is restored.

Humble Boy is a comedy-drama with shades of Hamlet.

Felix Humble, who may or may not be mad but is certainly socially awkward, discovers something upsetting about his mother’s relationship with her boyfriend. He has rejected a young woman who loves him, and there is even a brief duel at the end (though not with rapiers).

There is a ghost, of sorts, and a slightly ditzy (if you view Polonius that way) who spies on Felix for his mother. Then there is that “to be or not to be” motif, which almost becomes a “not to be.”

One could quibble about the inconsistency of British accents, but the cast performed well.

Particularly dazzling is Joseph Coracle in the title role. His character covers a lot of ground, from a stuttering dreamer escaping life to a man of purpose, from a man consumed by anger to a loving, forgiving one. Coracle gives them all credit.

Susan Holliday plays Flora Humble, who is anything but. The barbs fly in particular when mother and son confront each other, and she throws them well. But she also conveys what makes this woman attractive to men.

Bill Hurlbut is memorable, as he always is, in the role of the slightly lecherous and often drunk and loud George Pye, Flora’s lover. Yet, he is sincere in his feelings, even if he has an ambivalent relationship—at best—with Felix.

In her Silver Spring Stage debut, Annie Caruso is touching and funny as Rosie, Felix’s ex-lover, who also happens to be George’s daughter. In stark contrast to Hamlet’s Ophelia, she may be the play’s strongest, most-balanced, character.

It’s unfortunate the playwright didn’t give Mercy, Flora’s fawning friend with a crush on George, more stage time. Nancy Blum is hilarious, especially in a monologue that riffs on the Grace before Meals. Blum made the audience members laugh so hard they broke out in spontaneous applause when she finished.

Craig Miller has a gentle touch in the small but pivotal part of Jim, the gardener—who holds a precious secret.

Where Humble Boy falls short is in its neatly tied up ending. The ornery, even nasty, Flora, finds peace and makes peace with her son. But otherwise, the play is unfailingly funny, with real characters and insights, a moment of the macabre, and some heartbreak, all handled deftly by director Karen Fleming.

Again, Silver Spring Stage is to be commended for presenting many plays you won’t see elsewhere in the area and will be happy to discover.

Scenic designer and master carpenter William T. Fleming has designed the absolutely lovely set, genuinely evoking the garden of an English country home. He was also responsible for the set painting as well as the fight choreography.

Advisory: Some swearing, and a bit of undress. For ages 13 and up.