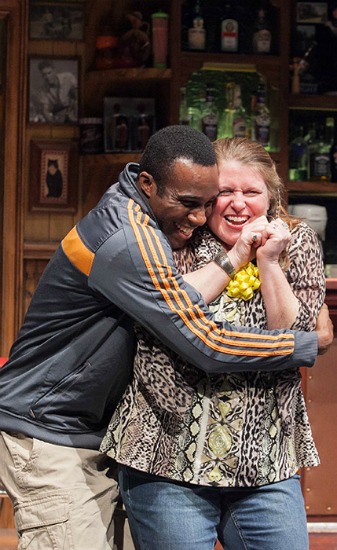 (L-R) Tramell Tillman as Chris and Tara Mallen as Jessie in Sweat at Arena Stage at the Mead Center for American Theater January 15-February 21, 2016. Photo by C. Stanley Photography.

Lynn Nottage’s Sweat masterfully explores the experience of a group of workers in Reading, PA, against the shifting economic realities of the year 2000. Recession and the de-industrialization taking place across America become a daily anxiety, as rumours of change at the local factory where they work turn into the “writing on the wall.” Simultaneously, the play presents the repercussions of actions taken in 2000 as they resonate 8 years later. This jumping forward and backwards in time plays out in other ways, too. Cynthia’s husband Brucie, already locked out of his factory, is an unseen symbol of a bleak future for the workers. Tracey’s eulogising of her German grandfather, who first came to America in the 20s, initially evokes the nobility of bygone times. We are later warned, though, that “nostalgia is a disease.” We may look forward for hope, or back for comfort, but Sweat demonstrates that inevitably we have to make our way while lost in the painful gap between the way things ‘ought to be’ and the way they actually are, now.

The production of Sweat currently at Arena Stage is outstanding, rising to the challenges and rewards of a truly exceptional piece of theatre. Kate Whoriskey assuredly guides this world premiere production, originally staged for the Oregon Shakespeare Festival. The revolving set by John Lee Beatty enshrines a stark duality between ‘then’ and ‘now.’ On one side, the bar where our workers meet in 2000 is rich and detailed, while on the other, grey cement bricks predominate in 2008, serving both as a police station and an apartment in a neighborhood you’d “die before you’d live in”. Peter Kaczorowski’s lights unify these worlds in the final scene, softening and warming the bar as it is unveiled in 2008 for the first time in the play. Jennifer Moeller’s costumes are sensitive and responsive to the shifts in time, as well as to the divisions of power, labor and class crucial to the play’s discourse. Jeff Sugg’s projection design perpetually reminds us of the shifting and passing of time, while Rob Milburn and Michael Bodeen’s sound design immediately and viscerally places us in the piece.

Sweat is drama that pulls no punches, and has more than a few important punches to throw.

Just as the push and pull of time plays out, so the relative merits of staying still or moving on are in constant play. Jessie suddenly reduces herself to tears recalling unfulfilled youthful dreams of travel. The next generation of workers, Chris and Jason (Cynthia and Tracey’s sons), disagree over their own paths. Chris wants to get a teaching degree, do something different, while Jason believes that the money in the factory is too good to leave. The barman, Stan, confesses he’d move away were it not for his physical injury, notably inflicted on him by negligent safety procedures at the factory.

The production is full of performances which drag you in and pull you along through a piece that while desperately sad, still has plenty of laughs. Trammel Tillman’s performance displays versatility, and extraordinary dramatic insight as Chris, while Johanna Day and Kimberly Scott are strong and emotionally compelling in their respective roles of Tracey and Cynthia: the difficult friendship at the heart of the piece. Stephen Michael Spencer’s ‘angry young man’ is menacing and well-measured as Jason, while Reza Salazar’s performance of the too often overlooked Oscar is empathetic and affecting, though carefully understated when needed. His delivery of the final line is a dramatic “sucker punch”; it takes our breath away. Sweat is drama that pulls no punches, and has more than a few important punches to throw.

There’s a sharp contrast between the perceived permanence of identity, particularly embedded in the idea of where you live and what you do, and the undeniable fragility of surviving difficult circumstances. No matter how hard, how desperately, we try to cling to the way things are, things are always becoming what they will be. To call Sweat  ‘gritty’ drama seems somehow condescending. It’s power is in its lack of the affectation that gritty could imply.  As well as responding to the personal plight of the playwright’s friend, it has been informed by two years of interviews undertaken by Nottage and Whoriskey with residents of Reading, the nation’s poorest city in 2011. Sweat speaks with clarity and authenticity.  It has the complexity and detail of contemporary drama, but the elegant construction of classical theatre. While it is an important, searing critique of “The American way”, it is also incredibly exciting drama heightened by the inevitable tragedy of misplaced rage. So don’t feel obligated to go and see Sweat because it is ‘important’, though that’s a good reason too. Go and see Sweat because it is simply fantastic theatre.