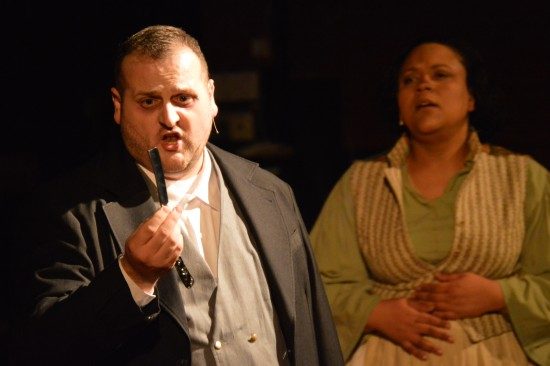 I was grateful to slip into the St. Mark’s Players’ last pre-Snowzilla performance of Sweeney Todd: The Demon Barber of Fleet Street, and not only because the next two performances had already been canceled. Anticipation of the coming storm overshadowed the evening with weighty unease. Few productions are so perfectly positioned to exploit such audience angst, and this performance did just that, leaving me fully ready to be snowed away (safely) at home, my mind ringing with soaring melodies and plenty to contemplate.

There was no weak link in this unbreakable chain of a cast.

Stephen Sondheim and Hugh Wheeler’s tense “musical horror,” directed by Christine Callsen and produced by Alexis Truitt and Heidi Keller, follows the tale of Sweeney Todd, a dejected barber who returns to his home in London after enduring 15 years of cruel banishment for a crime he did not commit. Having lost his wife and only daughter, this grief-stricken man turns to unspeakable acts of violence to avenge them.

The cavernous, imposing gothic-style sanctuary of St. Mark’s Episcopal Church was fully utilized to this production’s advantage, as cast members freely crept, stomped and danced their way through the transept, up into the chancel (choir area) and back, mixing with the audience and even the orchestra at choice moments. Todd’s second-floor barbershop was nested in the circular ambo (pulpit area), which offered just enough elevation to distinguish it from Mrs. Lovett’s pie shop below, allowing the audience to simultaneously enjoy conversations and reactions between happenings upstairs and down.

A carefully chosen, no frills set, appropriate costumes, and targeted lighting completed a grimy scene of 19th century Victorian-era London, already powerfully conjured up by the commanding presence of the cast. Starting with a solitary casket-sized trunk at center stage, the set morphs seamlessly to form a lonely pie shop, a bustling city street, an insane asylum, a roaring furnace and more.

There was no weak link in this unbreakable chain of a cast. Kevin Diana brought a dissonant mix of resoluteness and volatility to the role of Sweeney Todd, perhaps convincing even Sweeney aficionados, if for a moment, that the story might unravel differently this time. Diana’s hollow persona and empty gaze were offset by the explosive dynamism and twinkling eye of Taunya Ferguson’s Mrs. Nellie Lovett. The pair’s vocal strength and range were as balanced as their contrasting personalities. From the first line of “The Worst Pies in London,” Ferguson won and held audience affections, even as her character’s actions grew more detestable, all while sporting the most robust Cockney accent of the cast.

Jonathan Ohmart and Madeleine Adele Koon proved a delightful pair as the innocent Anthony Hope and Johanna Barker. Their glistening counterpoint in “Kiss Me” caught the audience up in an emotional tug-of-war between panic and infatuation. Meanwhile, Josh Canary and Sam Stenecker delivered extra measures of confounding likeability and irksome loftiness to their respective roles as Judge Turpin and Beadle Bamford.

Other notable performances came from Alexandra Linn’s unforgettable beggar woman, who knifed her way into scene after scene with alarming interjections of “City on Fire” and “mischief,” and Brevan Collins’ Tobias Ragg, who showed versatility as he matured from a goofy sales boy to a devoted guardian.

Lead performers are only as strong as the chorus that surrounds them. And St. Mark’s mighty ten person chorus carried the day, boasting an unbreakable army of voices that seemed to surpass its number. A chilling band of narrators, the company stormed the stage at key moments, demanding the audience “attend the tale,” which they crisply and clearly delivered—a commendable feat in the vaulted echo chamber that is St. Mark’s. At only a few points did they slip slightly out of sync with the orchestra, which could be all but unavoidable in such a space. Those familiar with the Tim Burton movie adaptation will be invigorated by the energy and lyrical diversity that the chorus adds.

Similarly, the powerhouse of an orchestra, led off by a thunderous pipe organ prelude, drove this production, enhancing its raw, urgent feel. Johanna’s birds could take pointers on how to “be more adaptive” from Jay Holcomb Frost, who doubled as conductor and pianist, at times straddling both roles, playing with one hand while waving his baton with the other. Adaptive characterized the entire orchestra, whose power and personality seemed to rise and fall to accommodate vocalists. In addition, a sprinkling of disconcerting sound effects, like the slow creaking of the imaginary door to Mrs. Lovett’s basement, further enhanced scenes.

Make Sweeney Todd one of the first things you see after digging out from Snowzilla. The St. Mark’s team has brought this morbid plot to vivid life in a way that will send your heart singing, your mind racing and your eyes searching for what might be lurking behind that next snow bank.

Sweeney Todd: The Demon Barber of Fleet Street runs through January 30, 2016 at St. Mark’s Players, performing at St. Mark’s Episcopal Church which is located at 301 A Street SE, Washington, DC.  For tickets, call the box office at (202) 854-9199 and leave a message, or click here.