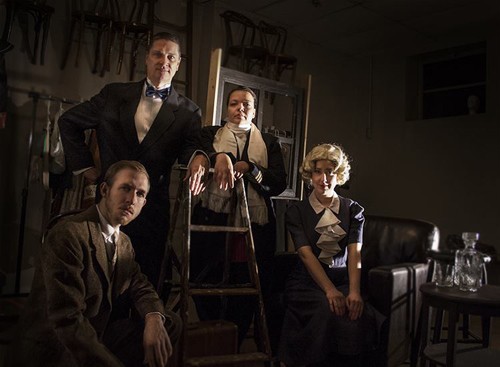 The Fells Point Corner Theatre (FPCT) and the new collective of local theater artists, The Collaborative Theatre (TCT), have joined forces to present The 39 Steps based on Alfred Hitchcock’s 1935 film. The play is true to the script of this spy thriller, but plays up the comedy to the hilt, with more than a nod to Monty Python’s style of parody. With a cast of only four actors playing over 150 characters, the production also incorporates other references and music from Hitchcock’s catalog of movies. Originally adapted by Patrick Barlow in 2005, it became one of the West End’s longest running plays and won an Olivier Award for Best New Comedy. The U.S. production garnered numerous Tony and Drama Desk awards and nominations in 2008.

You don’t have to be a lover of the legendary Hitchcock to be enchanted by this evening of non-stop laughter and ingenious theater. However if you are, it is an extra treat trying to catch all the verbal and visual references and puns as they fly by. This rollercoaster ride takes the audience from pre-World War II London to the Scottish moors and back again thanks to the triple-threat talents of Anthony Lane Hinkle as director/set/costume designer. With an equally skilled production team and a brilliant cast, this show is a winner.

You don’t have to be a lover of the legendary Hitchcock to be enchanted by this evening of non-stop laughter and ingenious theater.

Richard Hannay (Grayson Owen) is a 30-something, handsome Canadian bachelor living in London. It is 1938 and Europe is edging towards a second world war. Bored one evening, Richard finds a bit of distraction at a local music hall. While watching “Mister Memory” amaze the audience by recounting all the facts he has committed to memory, a mysterious woman, Annabella Schmidt, slips next to Richard. She a fires a gun to cause a distraction and asks for refuge in his apartment. Ms. Schmidt reveals herself to be a secret agent pursued by enemy spies (the 39 steps) who have stolen plans for a top-secret air defense system crucial to Britain’s security. When Annabella is murdered, Richard goes on the run, taking up her assignment to foil their plot to take the plans out of the country. As he searches for the leader of the spy ring in Scotland, Richard has also unintentionally become the prime suspect in Annabella’s murder.

Ann Turiano plays the three ladies in Richard’s adventure, easily capturing the distinct character of each – Annabella, the mysterious, seductive spy; Margaret the the naïve, much younger wife of a Scottish brute of husband in whose home he finds refuge while on the moors; and finally the iridescent Pamela as his unwitting companion (and eventual love interest) when she finds herself handcuffed to Richard after they escape the master spy’s henchmen.

While both Owen and Turiano are perfectly cast, it is Steven Shriner and Holly Gibbs who are literally breathtaking as the quick-change artists for a vast array of wonderful characters, sometimes playing two at the same time. Both possess incredible comic timing, playing against gender and even inanimate objects. Shriner and Gibbs must also move set pieces and their chameleon performances and energy are simply a marvel to watch. Kudos go to the cast for mastering a wide range of British and the infamously impenetrable Scottish accents thanks to their dialect coach, Lydia James-Harris.

Hinkle has created a simple yet clever set design. Basic objects like boxes, tall ladders, a moveable window and a door accompanied by the talents of Kel Millionie’s lighting design and Brian M. Kehoe’s sound design, transport the audience to a bridge, a moving train, the moors, and even witness to an on-stage plane crash – just to name a few. A large screen in the back of the stage uses intentionally bad shadow puppetry to move the action which sets the audience into fits of laughter. If you are looking for a way to chase away the winter blues, this is just the ticket!