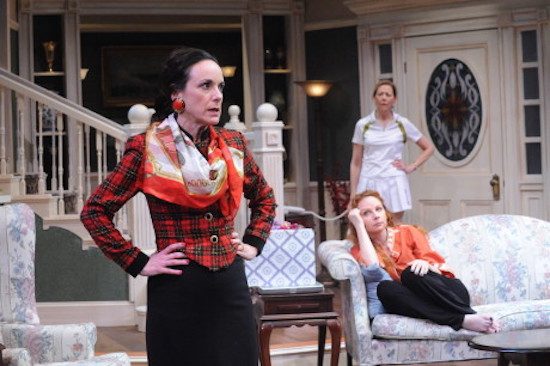 Introducing The Sisters Rosensweig, three Jewish unconventional ladies who just like any biological sisterhood troupe, are on a life-long journey for self-identify, true love, and enduring, lasting spiritual fulfillment.  Written by Wendy Wasserstein, The Sisters Rosensweig, is currently performing at Washington D.C.’s Theater J.  In this delightfully comedic play, Wasserstein spotlights the sisters’ unorthodox characteristics and the clashes of what is anticipated from them as relatives.

Sara, (Kimberly Schraf), the oldest and most cynical, hypercritical, and protective mother/sister is the only female character ever to head an international Hong Kong bank.  Gorgeous, (Susan Rome) is a spritely almost Jack-Of-All-Trades-like personality with an attitude screaming Carpe diem, who conquers being a housewife/mother/radio-personality extraordinaire.  Pfeni, (Susan Lynskey) the youngest sister is a Bohemian world-traveling journalist who meets with her siblings in London for Sara’s 54th birthday.

Overall, Campbell does a remarkable job of guiding outstandingly brilliant actors throughout the course of the production.

Each sister’s heartbreakingly comedic “relationship” with her beau is revealed as Sara’s birthday party and after-party commence.  Geoffrey, (James Whalen) the flamboyant on-again, off-again bisexual lover of Pfeni, segues into a relationship that is anything but a serene Sunday stroll in the park as both are world connoisseur travelers leading separate lifestyles.  Mervyn, (Michael Russotto), is a deliciously witty and thoroughly engaging fake furrier actively seeking the complex Sara’s courtship.  As a result, a slight, yet heated rivalry exists between Merv and Nick (Edward Christian), the British stiff whom Sara has been “seeing each other.”  The developing relationship between Merv and Sara is charmingly multi-faceted as the two polar opposites attract, giving Sara far too many excuses as a defense mechanism for her own good by implying that both Merv and Gorgeous would be the perfect pair instead. “I’ve never met anyone else like you…you’re warm and cold at the same time,” Merv shares with Sara in a sweet sentimental exchange of yearning to get to know her better.

According to playwright Wendy Wasserstein, The Sisters Rosensweig, is a play  “about being Jewish,” as her dream intent was to write about a play that celebrated the many possibilities of a middle-aged woman transforming into a non-traditional individual who “does not end up being alone.”  One of Gorgeous’ authentic moments throughout the course of the play is when she passionately proclaims, “Do you think we could have a moment of pure, unadulterated happiness?!”

Wasserstein reminds us that despite all of the conflicting boundaries within the interpersonal dynamics of the family, there will always be a solid foundation of the beauties of imperfections upholding beneath.  Although the show is slightly longer than anticipated and despite a rather predictable outcome in the plotline, the overall quality of the show is solidly authentic.   Director Kasi Campbell is in fine tuned alignment with the entire cast, artistic, and production team bringing out each team member’s highlighted qualities.  Set Designer James Fouchard’s detailed elements within the set, structures the full dynamics of the stage elegantly, harmonizing with Lighting Designer Harold F. Burgess’ beautifully nuanced lighting.  Costume Designer Kelsey Hunt’s authentically rich vintage design compliments the actors and entire production teams’ visions perfectly.

Overall, Campbell does a remarkable job of guiding outstandingly brilliant actors throughout the course of the production.

Running Time:  Two hours and 40 minutes including a 15-minute Intermission.