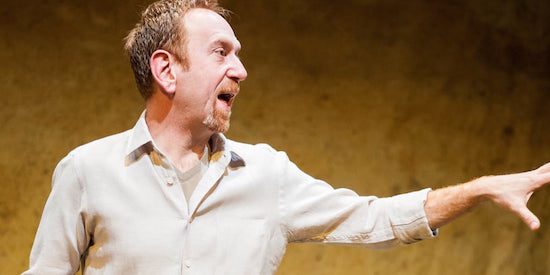 On a cold January night, opening night at the Atlas Performing Arts Center begins the infamous Voices from a Changing Middle East Festival with a one-person play called Wrestling Jerusalem.

Written and brilliantly and passionately performed by Aaron Davidman, and directed by Michael John Garcés, Wrestling Jerusalem begins with accusing language, what started this conflict, Zionism? No. World War 2? No! We are given issue after issue 50, 60, I lost count… and each time an emphatic NO! After each reasonable argument that it is perhaps one or two singular issues that created this chaos. No! Aaron Davidman, brings us to his first time in Israel, 1992. He transcends his Jewish identity by taking on dozens of different characters, some Arab, some Jewish, old, young, male and female. They all have a position, they all have a history, but more importantly, it is their own experiences, not that of their ancestors that brings this conflict to the ultimate impasse.

It will challenge your intellect, change your vantage point…

Mr. Davidman adapts accents of dozens of characters. He is a believable mimic and plays each character with respect and understanding. Interesting to me that both the instrumental and singing reminds us that if you don’t speak Hebrew or Arabic, that these two cultures share music, dance and food. We have more in common with each other both genetically, historically and geographically, why can’t we just put down our weapons and be friends? Surely one of the goals of this festival is to bring intellectuals from both the Arab and the Jewish world together to realize that to accept and respect the point of view of one another. Yes empathizing with one individual from the opposite side, might not be the solution, but it is a beginning.

Showing the desolate conditions of the Palestinians, reminiscent of the death camps of World War 2, Ramollah reminds Mr. Davidman of outdoor prisons for people whose only crime was birth. Rocks met with bombs, children strapped with suicide vests seemingly a people with no hope will do horrific things. The balance of power is not with the Palestinian people and Hamas has been democratically elected by the people. It is an untenable situation for the Israelis to have the people you are trying to negotiate with unwilling to say that you have the right to exist.

Refusing to take either side, Mr. Davidman wrestles with the primary teachings of Moses, that we are all people of God, and God is within all people. A cure, once you have identified the problem, should be within our grasp as intellectuals. Yet the hate is deep, the wound raw, it is multi generational, but is a worthwhile goal. Mr. Davidman says yes! We must attempt to live in peace. Whether the patience of the Arab people will outlive the Zionist state, is anyone’s guess. 7 US presidents have failed to help bring peace to this region. Give up? Seems logical, but no we cannot, failure is not an option.

This is a production that adults wanting to understand the conflict in a mostly balanced format absolutely must see. It will challenge your intellect, change your vantage point, and perhaps give you a glimmer of hope.