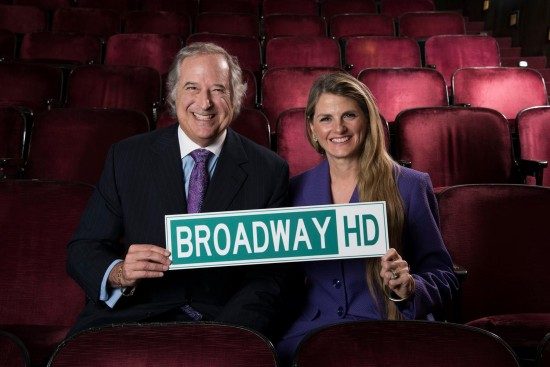 BroadwayHD recently launched as an online streaming service with a mission to “promote and preserve live theatre, extending the reach of Broadway and Broadway caliber shows to anyone, anywhere.” Founded by Broadway producers Stewart F. Lane and Bonnie Comley, BroadwayHD has a goal of “capturing and then transporting the magic of performance from the stage to your screen.”

If you don’t already recognize their names, you certainly will be familiar with the hit Broadway shows that they have produced.  Bonnie Comley has produced On Your Feet, A Gentleman’s Guide to Love and Murder, Legally Blonde, War Horse,  and others. Stewart F. Lane has produced La Cage aux Folles, Will Rogers Follies, Thoroughly Modern Millie, Merchant of Venice, and others.

“We have a diverse background in the industry that has really afforded us the opportunity to be involved in nearly every facet of Broadway,” says Bonnie. “Stewart started on the stage as an actor, and since then has gone on to add director, producer, author and theater owner to his resume. I actually got my start in broadcast journalism and have since gone on to produce two dozen Broadway productions. We are both members of the Broadway League and are involved with numerous philanthropic theater, arts and educational organizations including The Actors Fund, The Drama League, and the City Parks Foundation Arts Committee.”

So how did they both connect to form BroadwayHD?  As it turns out, Bonnie was a reporter and host for a TV show on the Travel Channel and she interviewed Stewart for a show he was producing on Broadway. She said, “I called him several more times for articles I was writing for a performing arts publication, then started working for him as a script reader. I have been working for him ever since!”

Considering these two are wizards of producing hit Broadway shows, it is no surprise that they came up with another idea that they hope will receive standing ovations from theatre aficionados from around the globe, albeit from their computer chairs at home. Bonnie says, “Our first love will always be live theatre, but we saw the opportunity to expand the reach of this art form to a broader audience. There are so many people that don’t have the opportunity to enjoy the magic of Broadway in person. There are also large contingents of Broadway lovers that want to see shows again and again. Being that BroadwayHD is the first and only online streaming service of its kind, we’re excited to have found a solution to those problems.”

Although the online streaming service is available now, BroadwayHD is still in development in regards to capturing new live performances and bringing the recorded shows to their subscribers.  Stewart says, “BroadwayHD is committed to promoting and preserving live theatre, extending the reach of Broadway and Broadway-caliber shows to everyone, anywhere. We are working to capture the magic of as many live performances as we can with HD and 4k video technology, such as our Romeo and Juliet production, starring Orlando Bloom and Condola Rashad. Because it’s not yet possible to capture all new performances in HD, we are sharing with our subscribers pre-recorded digital captures of a large variety of shows. A huge part of the excitement of live theater is seeing the sweat and tears of the actors and the crew who put the show together, and we make sure to leave in all of those little bits that give life to the production. A big part of our strategy for the next year includes new captures of current productions. It’s in the works but nothing that we can announce yet.”

There are many ways you can currently use the online streaming service, including your computer, your phone, your tablet, and your TV, even through Apple TV and Google Chromecast. As of right now, they are working on developing a native BroadwayHD app so that “subscribers can watch their favorite performances even more quickly and easily on platforms such as AppleTV, Roku, iOS, Android, and Chromecast.”

The service has two packages available for subscribers.  For those wishing monthly access, the price is $14.00.  Or you can save by purchasing an annual, one year access package for $169.00. They currently offer more than 130 shows that range from musicals and dramas to comedies and Shakespeare classics. “We are always looking for new opportunities to bring fresh content to our platform for every kind of theatre fan,” says Stewart.

Stewart sums things up by telling the MD Theatre Guide, “Our hope is to one day be able to stream an opening night performance of every Broadway show, and then preserve the performance for all time on BroadwayHD.com. Until we get there, we want to make sure that Broadway is as accessible as possible to people all over the world, and we’re doing it by getting as much great theatrical content as we can available on BroadwayHD.”