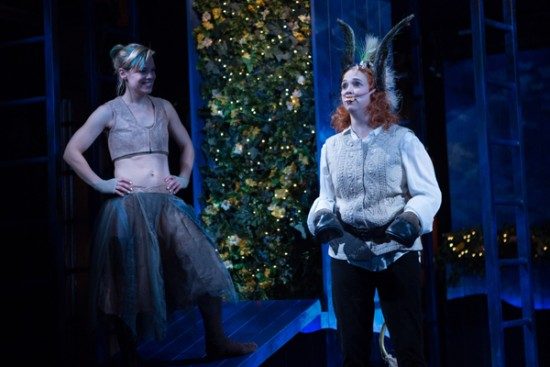 Do yourself a favor: Transport yourself out of the snow and slush of politics and hie thee to Folger Theatre for A Midsummer Night’s Dream of enchantment.

Superbly directed by Aaron Posner, this Midsummer is a triumph of cohesion and collaboration, a perfect antidote for the real world’s dysfunction.  I repeat: Do yourself a favor.

A gorgeous, transportive Midsummer, a testament to the theatrical magic of invention.

The entire cast excels—a feast of split-second timing and ensemble acting. Director Posner’s wealth of invention, surfacing comedic nuance within comedic nuance, must surely have been augmented by the actors’ constant discovery.  Kudos to them all!

Shakespeare’s galloping tale of mismatched lovers is led by Erin Weaver’s delightfully insurgent Puck, who is—ironically—perhaps the most grounded realist in this world of fantasy and faeries. A commanding presence, Weaver’s Puck strides across and over and above the stage with acrobatic precision. This is her realm and she is wired into its every palpitation and rhythm.

Set in motion by Puck’s commander, Oberon, King of the Faeries, the versatile Eric Hissom anchors the action with equal parts gravitas, fluidity, and mischief. Expertly played by Hissom, Oberon oversees his kingdom with benevolence and no small measure of amusement. Hissom brings a refined version of these same qualities to his mortal doppelganger, King Theseus. Queen Hippolyta, played with regal comportment by Caroline Stefanie Clay, also soon dissolves into her faerie equivalent, Titania. Commanded by Oberon, Puck famously enchants Titania to become enamored of Bottom the A*s, aka the bellicose actor Bottom himself bewitched into a donkey.  Clay gives us a Titania as swooningly solicitous and shamelessly sensual as her Queen Hippolyta is queenly, and the contrast is delightful.

The consummate Holly Twyford plays Bottom, the actor and the a*s, and she gives us the quintessential bluster and bray of each. As the star of the itinerant troupe, Twyford’s actor Bottom is the grande dame of the stage dreaming of soliloquies and songs, and her transport into the vagaries of assiness—complete with asses’ ears, platform hooves, and comically protruding “teeth”—provides a running stream of merriment.

Shakespeare’s story, of course, ignites when the aristocratic patriarch Egeus, played with ferocious authority by Elliott Bales, commands on pain of death that his daughter Hermia marry Demetrius, his choice for a son-in-law, who dotes on Hermia. Hermia, meanwhile, dotes instead on Lysander, who dotes on her as well, but–with no happy ending in sight–Hermia and Lysander flee through the forest to Lysander’s aunt’s home beyond the reach of Athenian law. Meanwhile, there is also Helena, who dotes on Demetrius, who loves her not. In an effort to endear herself to Demetrius, Helena tells him of Hermia’s flight, and proceeds to follow Demetrius into the forest as he pursues his beloved Hermia. Oberon, of course, has a master plan to set the lovers right, but Puck mistakes Lysander for Demetrius, and who loves whom gets scrambled—and eventually unscrambled–on this magical midsummer’s eve.

The lovers— Hermia, Helena, Lysander, and Demetrius—traipse through the forest, alternately seducing or swooning or spurning or forswearing inlovedness with their ill-fated counterparts, to much fine and funny complication. Betsy Mugavero plays the petite and defiant Hermia with fire and fidelity, the only one of the lovers who hasn’t been bewitched. Mugavero’s Hermia is astonished and alarmed, but never defeated by her beloved Lysander’s inexplicable change of heart. Kim Wong plays the tall and unrequited Helena, with dogged determination first to pursue her beloved Demetrius and later to get to the bottom of the seemingly cruel joke everyone, she’s convinced, is playing on her. Wong’s Helena brings a contemporary, mean-girl-tested savviness to the role.  Eventually, Mugavero and Wong give us a spirited and utterly relevant rendition of their furious verbal battle about height and trickery.

Adam Wesley Brown as Lysander and Desmond Bing as Demetrius expertly imbue the young men with hilarious combinations of male cluelessness and machismo. Lysander, erroneously drugged by Puck, soon falls in love with Helena instead of Hermia, and Brown’s Lysander becomes the very picture of bedazzlement. He is all bluster and bravado, and his cascade of rejection toward his once-loved Hermia is an explosion of linguistic acrobatics. At one point, Brown’s Lysander takes out his ukulele and lulls all into enchantment with his lovely voice. Bing meanwhile gives Demetrius a charming and forthright earnestness as he is swept along by the night’s machinations; Bing’s Demetrius is indeed perfect putty in Puck’s hands to much comedic good effect.

The Players, led by Richard Ruiz’s adroitly comic Peter Quince, weave in and out of the night’s mischief preparing for their performance before the King and Queen, and an excellent ensemble they are. Monique Robinson as Snout, who plays the stately “Wall” in the troupe’s performance, brings a no-nonsense clarity, plus a beautifully resonant voice, to this inanimate object. A better “Wall” one could not imagine. As fellow thespian Starveling Justina Adorno brings a buoyant conviction and depth across her many incarnations. As the streetwise New Yorkerish  Francis Flute, Dani Stoller gives us an endearing twist on her character’s character. And Megan Graves as Snug playing the mousy, hysterically inaudible Lion, brings a Chaplinesque purity to the role.  Interestingly, the lovers’ death scene in the Player’s cartoonish play, performed by Holly Twyford and Dani Stoller, is perhaps most sober moment of the night—they play it straight and the audience is moved.

Indeed, Director Posner’s lyrical, light-hearted vision shone through the fine work of his design team as well. Posner infused the production at critical points with choreography and whimsical songs, marvelously realized by choreographer Erika Chong Shuch. The ensemble’s perfectly timed performances built the momentum and merriment throughout the evening. Scenic design by Paige Hathaway created a pristine lushness with color and texture, and lighting designer Jesse Belsky beautifully evoked the magical and the majestic. Costume Designer Devon Painter gave us fabulous flowing and fanciful costumes that blended the real with the imagined. Special applause to Sarah Pickett for sound designer and additional music; indeed, sound itself became a presence in this production, filling the night air with a crisp repartee of tones and tunes and clever retorts.

A gorgeous, transportive Midsummer, a testament to the theatrical magic of invention.