Theatre Review: ‘As You Like It’ at Center Stage 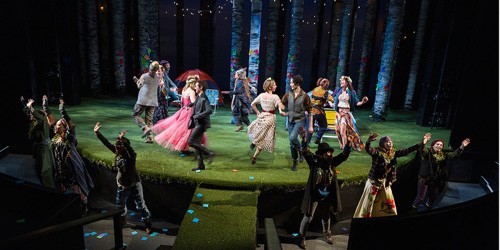 The cast of Shakespeare’s ‘As You Like It.’ Photo by © Richard Anderson

With Center Stage’s temporary move to Towson University’s Center for the Arts, the company can continue to bring great theater to the area while its Calvert Street home gets an exciting, year-long renovation. Shakespeare’s pastoral comedy, As You Like It is no exception and, with its all-female cast, as welcome as a warm summer breeze during a snowstorm.

Center Stage’s associate director (and dramaturg for this play) Gavin Witt has given this play a carefully trimmed and relatable adaptation and Wendy C. Goldberg provides inventive and joyful direction. The work of costume designer Anne Kennedy and set designer Arnulfo Maldonado take their inspiration from decades of last century’s pop culture and design influences as well as those of this nascent century (boom boxes to cell phones and a touch of Earth, Wind and Fire). Married with Josh Epstein’s lighting design, the result is a layered and rich visual mash-up.

Center Stage’s production of  ‘As You Like It’ is a glorious, merry journey well worth taking.

The costumes go from black and sleek, runway-worthy creations to a bohemian/hippie style, utilizing layers of patterns and color that often blurred gender lines. Maldonado succeeds in the jarring contrast between the claustrophobic and sterile court setting – all straight lines and harsh angles – and the welcoming, expanse of nature in his stunning creation of the Forest of Arden.

Electronic, thumping music and a militaristic, in-your-face dance sequence by choreographer Karma Camp open the play to two stories that parallel and intersect. The cruel Duke Frederick (Celeste Den) has taken his brother’s throne and banished Duke Senior (Margaret Daly) to the Forest of Arden. Oliver (Tia Shearer), reminiscent of a coiled snake, is the eldest son of the late Sir Rowland de Bois who has inherited his father’s estate. He is of the same ilk as Frederick. So jealous is he of his younger brother, Orlando (Sofia Jean Gomez) that Oliver denies him a gentleman’s education while also plotting his demise.

When Orlando unexpectedly defeats the Duke’s wrestler, Charles (Liz Daingerfield), he must flee to the forest with his trusty servant, Adam (Margaret Daly). But before he goes, he and Duke Senior’s daughter, Rosalind (Julia Coffey), have already managed to fall madly in love. The paranoid Duke then banishes Rosalind. So close and faithful is his own daughter, Celia (the delightful Mattie Hawkinson), to her cousin, she joins Rosalind and the court fool, Touchstone (Charlotte Booker) to find Senior Duke. They take with them new identities – Celia becomes “Aliena,” a sweet but pampered “princess” and Rosalind disguises herself as a man called “Ganymede.” Thus begin the comic deceptions, misunderstandings, romances and reformations so familiar in Shakespeare’s plays. Even Touchstone finds love in the forest with the ditzy but sweet Audrey (Julia Brandeberry).

Arden is glorious, with trees whose mighty trunks drop from to the sky. This is where the banished Duke and his band now live and very happily it seems. There are also two shepherds, Corin (now a very laid back Celeste Den) and the comically lovelorn Silvius (Liz Daingerfield) whose affections are constantly spurned by Phebe (Jenna Rossman). They all live like 1960s hippies or escapees from a 90s outdoor music festival, setting up tents, beach chairs and frequently breaking into song and dance.

Contrary to the rest of the Duke Senior’s men, Jacques (Angela Reed) revels in melancholy – sort of a hippie philosopher. With long blond dreadlocks, frequently stoned and always eating, Reed is completely captivating as she delivers the “seven ages of man” and the iconic “all the world’s a stage” speeches and is also deft at the comic aspects of the character.

All the actors and ensemble (which include Towson University alums) do a magnificent job across the board but it is the interplay between Rosalind, disguised as a man, and the unsuspecting Orlando that steals the heart. Their chemistry is palpable. Gomez plays Orlando with a sincere gallantry and passion of a man in love. When Rosalind, as Ganymede, tutors him in the art of wooing his beloved Rosalind, Coffey’s reactions are such a pleasure to watch. She personifies the pure enthusiasm and angst that all humans experience in the first blush of love.

The cast is all shapes, sizes, ages and color of woman who prove that gender also has no limitations. Everyone seems to find love or redemption, and sometimes both, in the forest. Center Stage’s production of As You Like It is a glorious, merry journey well worth taking.

Running Time: Approximately 2 hours and 20 minutes with a 15-minute intermission.