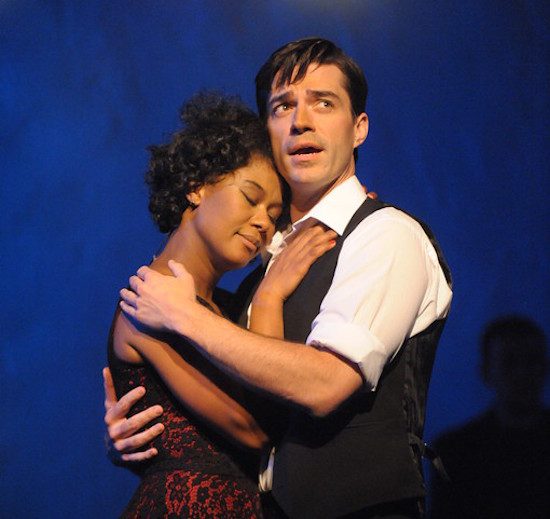 When an established theater like Olney takes on a classic like Carmen, with a production team featuring leading lights like director Moisés Kaufman on book and music by Arturo O’Farrill, the expectations are high.  And Olney audiences—like audiences anywhere—should welcome the opportunity to see great artists tinker around, thinking out loud and downstage center.  Still given Olney’s reputation, perhaps our expectations in this instance were a bit too high; for although Carmen:  An Afro-Cuban Jazz Musical has many spectacular moments, well-scripted, brilliantly choreographed and thrillingly orchestrated, it still merits further tinkering.  There is a lot of fertile artistic thought here, and some finely realized performances; but it still needs some work in order for the show to create a completely satisfying theatrical experience.  It is a question of potential, obvious potential, that has yet to be fully realized.

…there is so much to recommend this production.

With this Carmen, Kaufman takes us from 19th– century Spain—the original setting for Prosper Mérimée’s novel and Georges Bizet’s immortal opera—and places the story in the ferment of Cuba in the late 1950’s, a time when the corrupt regime of Fulgencio Batista was falling apart under the weight of its epic corruption and double-dealing.  We first meet Fina (played with saucy relish by Michelle Alves) who narrates the story and ensures the plot moves along at a brisk pace.  We then meet a lively assortment of characters in downtown Havana, in a dingy bar next door to the cigar factory where Carmen (the formidable Christina Sajous) works.  The dance sequences are expertly choreographed by Sergio Trujillo, led by the talented Skizzo Arnedillo (who performs a fine, jazzy ‘pas de deux’ with Sajous).

Into this milieu arrives Jose, the new recruit from the provinces and determined – at first – to serve the dictator Batista.  Brandon Andrus gives us a truly fascinating Jose, whose emotions and his sympathies are buried so deep that it’s only through the slightest nuance that you can glimpse his inner life. Jose has an on-again, off-again relationship with the hometown girl Micaela (the touching Briana Carlson-Goodman), and his decision to hitch his fate to Carmen and accompany her to the Sierra Maestra.

In lesser hands Carmen would have simply been a revolutionary devoted to Castro and Communism; in such a simplistic scenario, her murder at Jose’s hands would have been an overly simplistic, Cold War leftist martyrdom.  But Kaufman insists that Carmen be independent of political as well as personal alliances; no sooner has she succeeded in her latest delivery of weapons than she abandons the revolution, returning to Havana to take up with prize-fighter Camillo—played with charm and force by Caesar Samayoa.

Given the additional layer of revolutionary politics the challenge is how to position (and stage) Carmen’s fate.  Sadly, even with the complexity of Kaufman’s Carmen here—a choice I heartily approve—the final tableau is a disappointment. Because what binds both Bizet’s opera and Kaufman’s musical together is a central figure, a woman whose fatal ‘transgression’ is her insistence that she live free of all attachments of any kind.  Carmen is a martyr to her own freedom, and her own freedom alone.

Disappointments aside, there is so much to recommend this production.  The on-stage orchestra led by Christopher Youstra is phenomenal, and leaves you wishing they’d set up a dance floor for the audience to join in; they set the frenetic pace that the cast more than matches with their own passion. David Landar’s lighting effects – especially the dingy fluorescents at Havana’s bars—give the production a unique sense of flow, and Clint Ramos’ costumes vividly evoke the era.