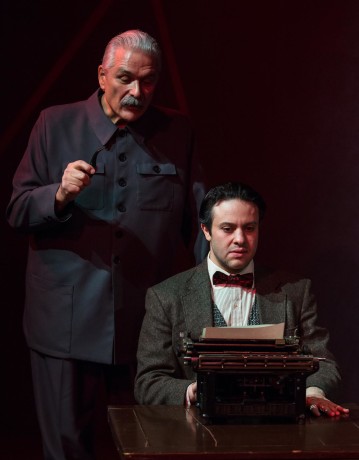 As Collaborators opens, a comical Joseph Stalin chases frightened playwright Mikhail Bulgakov around Bulgakov’s apartment. High jinx for Stalin, but a terrifying recurring nightmare for Bulgakov in this play by John Hodge presented by Spooky Action Theater. This opening scene establishes a darkly humorous tone that deepens as the play unfolds. Hodge’s imaginative take on real-life Russian playwright Bulgakov and his fateful task of writing a play about young Stalin is both bitingly funny and terrifying. Director Richard Henrich and his production team highlight these moments of humor and hope at every turn, while slowly building the tension and terror that befell the Soviet Union in the 1930’s.

Diving headfirst into the satire of Hodge’s play, Spooky Action Theater’s Collaborators  depicts the endurance of the human spirit in the midst of oppression.

When Bulgakov (Paul Reisman) wakes from his nightmare, we learn that though his play, The White Guard, was a success, his subsequent works have been banned, and he is struggling to stay afloat. He hopes that his latest play, Molière, will finally be performed after three years of rehearsal. On the night of its opening, however, Bulgakov receives a visit from two secret policemen who tell him that Molière will not be performed unless he writes a play about young Joseph Stalin (Joe Duquette). Initially refusing the task, Bulgakov finally gives in when the life of his beloved wife, Yelena (Mackenzie Beyer), is threatened. Unable to begin writing, Bulgakov receives help from Stalin himself, who offers to write the play in exchange for Bulgakov’s help in governmental decisions. Bulgakov’s guilt over sacrificing his ideologies to save his and Yelena’s lives continues to consume him as the State cracks down and his friends begin to disappear.

Reisman is heartbreaking in the role of Bulgakov, expertly portraying the playwright’s agonizing attempt to justify his assignment to his friends and to himself. Vladimir (Michael Harris), the Secret Police officer who supervises Bulgakov’s work, is enthralling in his deft dance between smiling confidant and cruel enforcer. Mackenzie Beyer’s magnetic portrayal of Yelena’s strength and unwavering support of her husband helped to show why Bugalkov would make this sacrifice for her. Joe Duquette is a charismatic Stalin, delivering some of the play’s funniest lines with ease and honesty. It’s hard not to fall under his charm.

Collaborators is supported by an excellent ensemble. Most notable are Willem Krumich (Actor #1) and Matthew Marcus (Actor #2), who play actors in rehearsal for Young Stalin  (Bulgakov’s title for his play) with perfect over-the-top melodrama and physicality. Robert Bowen Smith gives a poignant and passionate performance as Grigory, Bulgakov’s poet friend, and Ryan Carlo Dalusung plays Sergei, the young, enthusiastic supporter of the Communist party, with open-eyed eagerness and spunk.

One of the most captivating effects of this production is its ability to blur the line between dream and reality by staging simultaneous moments on different ends of the stage. The intimacy of the space comes close to pulling the audience into the action, with whispered conversations occurring right next to the front rows, and props placed on empty audience seats. The lighting (Brian S. Allard), set (Giorgos Tsappas), and sound design (David Crandall) are particularly effective in creating an eerie, dreamlike atmosphere. During Bulgakov’s writing sessions with Stalin, a low bass note hums under the dialogue, as red light and smoke stream into the room. The period-appropriate costumes (Alisa Mandel) and props (Becky Mezzanotte) are simple and elegant.

Diving headfirst into the satire of Hodge’s play, Spooky Action Theater’s Collaborators  depicts the endurance of the human spirit in the midst of oppression.

Advisory: Some language and violence. Recommended for ages 13 and up.