Theatre Review: ‘Father Comes Home from the Wars (Parts 1, 2 & 3)’ at Round House Theatre 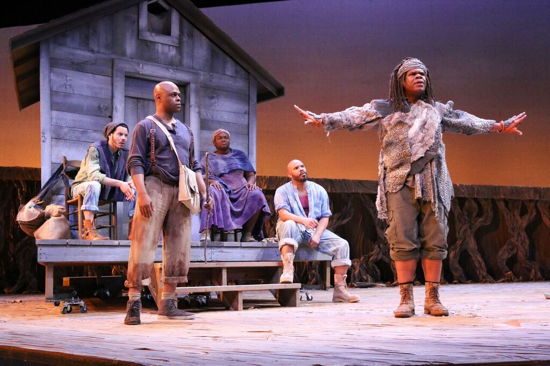 At a crucial point in Suzan-Lori Parks’ fascinating new work, Father Comes Home from the Wars (Parts 1, 2 & 3) we find the central character—the slave, Hero—holding two uniforms in his hands:  one for the Union Army, one for the Confederacy.  His choice to wear both, but in a specific order, offers a moment all the more eloquent because it is acted out in silence.  Caught in a no-man’s land of the mind where he can choose his own fate, we wonder:  is Hero free, or not?  If free, in what sense?  And if still enslaved, how?  Why?

…writer whose roots run deep in the culture…

Epic in scope and mythological in its aspirations, Father Comes Home marks the beginning of a nine-part series of plays addressing the complexity of the African-American experience, from the Civil War onward.  Drawing from influences as diverse as Greek tragedy, Bertolt Brecht’s “Epic Theater” movement, heavy with irony but with a welcome dash of urbane, Gurney-esque satire thrown into the mix, we find Park at the top of her game.  Her characters are drawn with care and more than a dash of whimsy, but always with an eye towards questions that haunt us to this day.  With Timothy Douglas’ steady, wise hand at the helm, Roundhouse Theatre enhances its reputation as a showcase for cutting-edge American work.

Our odyssey begins out on the stoop, with Hero’s fellow slaves laying odds whether he will agree to go with his master to the war; a “Chorus of Undesirable Slaves” (Park’s designation, natch) use the impending choice as an excuse to lay about and shoot the breeze.  Jefferson A. Russell, whose work was so memorable in Roundhouse’s production of August Wilson’s Two Trains Running, leads the Chorus, while Craig Wallace, a fixture on the DC theater scene, provides weary sagacity as The Oldest Old Man who shares Hero’s ambivalence about their master’s offer.  Wallace returns in the third episode here as Odyssey Dog, all shag, ebullience and irreverence.  This canine incarnation, while clearly derivative (Sylvia, anyone?) is used by Park to create yet more distance between the audience and the action, a hallmark of German director Bertolt Brecht’s provocative, politically cogent style.  We’re not meant to sympathize or empathize with Hero and his cohort here; we are meant to think deeply about the forces that drive them, and which constrain their moral choices.

Jaben Early gives the complex central character Hero more than his due, burdened as this character is with choices made and yet to be made.  Questions of self-enslavement and self-abasement compete with the desire for freedom, and Hero is given the foresight to recognize the dangers inherent in the freedom he craves.  As his wife Penny (a subtle nod to Odysseus’ wife Penelope, from Homer’s Odyssey) Valeka J. Holt gives us the desperation that comes from their status; she guards Hero’s secrets, and has the courage (or cowardice, take your pick) to accept his flaws.

Park sums up the dilemma of freedom in the midst of an off-hand discussion with the Colonel (Hero’s master, played with refined menace by Tim Getman) about his original market value.  After doing the numbers, and being told that freedom can be a beautiful thing, Hero asks, poignantly and with more than an ounce of anxiety, “Where’s the beauty of being worth nothing?”  The answer to this shocking question reverberates through the theater, because Park uses this seemingly idle, Civil-War era dialogue to remind us about out the perceived worthlessness of African-American males today.

Tony Cisek captures the symbolic elements in Park’s playwriting in his set, with a ramp that is symbolic in both its construction and its use in the course of the play.  Sound Designer Eric Shimelonis provides discreet, atmospheric touches that remind us how the clamor of war mingled with the ubiquity of songbirds.  Helen Huang captures the drab and smudges of the plantation slave’s clothing, and master blues guitarist Chester Chandler provides songs that sharply punctuate the action.

True to form, Parks’ dialogue is multi-layered offers us no easy answers; the characters and situations here point towards a troubled future in the six episodes that remain in this cycle.  And there are more than a few nods in the direction of mythology, American history, what-have-you, a reminder that we have a writer whose roots run deep in the culture indeed.  The next episodes in this cycle cannot come soon enough.