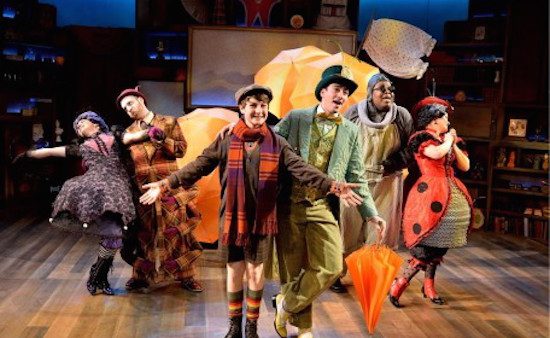 The cast of ‘James and the Giant Peach.’ Photo by Bruce Douglas.

Simply delicious. That’s perhaps the best word to describe the Adventure Theatre’s new production of James and the Giant Peach, which made its triumphant opening this past weekend at Glenn Echo Park. A well-matched coproduction with the Lyric Theatre of Oklahoma, this feisty mini-musical, based on the popular book by Roald Dahl, is a must-see for families eager to introduce young children to the magic of musical theatre. The cast and production staff at Adventure Theatre-MTC, led by director, Michael Baron, and assistant director, Michael Windsor, serve up an absolute visual, musical, and comical smorgasbord, jam-packed with endearing characters, brilliant costumes and a rousing, colorful score.

James and the Giant Peach tells the story of the young orphan, James, who is taken in by his only living relatives, two cruel, conniving Aunts who intend to exploit him for their own gain. When he’s sent to chop down a fruitless peach tree in his aunts’ backyard, he discovers the recipe for a magic potion that causes the tree to proliferate into an enormous peach. Before he knows what’s happening, James finds himself inside the peach, surrounded by a friendly band of human-sized insects (and a spider), who were also enlarged by the potion. But as the story rolls on, it’s James who sees the biggest growth spurt, as he earns the trust of his new friends, finds his voice as a leader, and learns the true meaning of family.

This high-energy cast was simply delightful. Each actor seemed genuinely ecstatic to be on stage, a contagious sentiment that the audience couldn’t help but catch. Crowd favorites included the roguish, motorcycling duo of in-your-face aunties, Spiker and Sponge, and James’ instantly endearing gang of buggy comrades—a dainty royal ladybug, ever-chipper grasshopper, unassuming spider, chronically terrified earthworm, and cynical centipede. There’s a character for practically every personality type, which makes for loads of both laughable and teachable moments. The play’s young lead and Bethesda resident, Eli Shulman, was a relatable James, and kept pace with his more senior cast members, especially in the tap-dance department, choreographed by Rachel Leigh Dolan,

The Adventure Theatre production team proved itself ambitious and resourceful, pulling together an elaborate set by Katie Sullivan, eye-catching shadow and rod puppetry by Andrea “Dre” Moore, colorful lighting by Rob Siler, imaginative props managed by Ellison Roberts and April Carter, and stand-out costumes by Jeffrey Meek to set this story in vibrant motion. The backdrop, made of floor-to-ceiling wooden shelves covered with eclectic knickknacks, was like a two-page spread out of an I Spy book. Rolling stacks of equally busy boxes and crates were slid across the stage to frame places like James’ drab orphanage, the hilltop home of Spiker and Sponge, and the luscious center of the giant peach. A collection of bright orange umbrellas was cleverly incorporated to represent the puffed-up peach, doubling as both set and prop, and repeatedly adapted throughout the show to animate the peach’s barreling journey down hills, across the ocean and through the air, to reach its harrowing height at the pinnacle of New York City’s Empire State Building. A playful, foot tapping score by TONY-nominated team, Pasek and Paul, adapted by Aaron Michael Broderick and executed by Matt Otto, builds the show’s momentum. Rachel Hishorn’s dialect expertise helps transport this story—and the audience with it—out of Washington DC and into the English countryside where it is set. Meek’s outlandishly imaginative costuming was truly the icing on the cake (or perhaps cream on the peach?), enhancing the magic of everything else unfolding on stage.

There were a few isolated moments, particularly during James’ more reflective solos, when lyrics sounded somewhat muddled and difficult to hear—no doubt an opening wrinkle that will be quickly ironed out.  Adventure Theatre’s Glen Echo venue is quite tiny, so patrons need not concern themselves with finding a good seat. However, if you really want to feel immersed in the action, the first few rows are a good choice. At just over one hour, the brisk pace and abbreviated run time ensures even the greenest little peaches in the audience will have no problem keeping attention. Creative, colorful and teeming with many-legged life, James and the Giant Peach at Adventure Theatre is chock full of imagination and sweet lessons for every member of the family. Harvest your tickets before it goes out of season!

James and the Giant Peach runs through Tuesday, April 4 at the Adventure Theatre MTC, 7300 MacArthur Blvd, Glen Echo, MD, in Glen Echo Park. For tickets call (301) 634-2270 or purchase them online by clicking here.