Theatre Review: ‘OLIVÉRio: A Brazilian Twist’ at The Kennedy Center 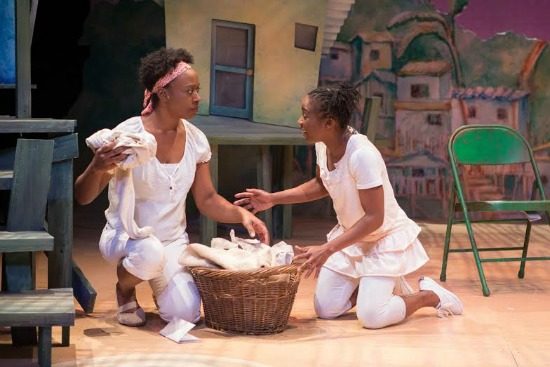 As soon as I sit down, I begin to wonder about this “twist” on Charles Dickens’ well-known classic, Oliver Twist. The set precedes the production, pumping anticipation through the audience like an IV drip. It’s colorful and it glows. Aqua lights cast a mystical spell over the beautiful depictions of Rio’s favelas; ocean waves paint the sandy-colored stage, and my imagination is already working. I hear oohs and aahhhs from adults and children alike in the audience, awaiting this Brazilian adaptation to take flight. And then it happens…

We are dropped into a colorful world of hope, trust, scandal and choice.

But not immediately. Unfortunately, the production, directed by Juliette Carrillo, begins with the cast dressed in all white lamenting about being on the wrong set. This was supposed to be an Oliver Twist production they say, but it’s “all wrong.” This set was definitely NOT London; and there was NO Oliver. While I was not too enthused by this introduction, Felicia Curry (who plays Esperança Olivério, more affectionately known as Oli), soon changed my mind, piping up from within the audience with such vigor, my hope in the production was revived. Her message: All is not lost. The show can go on because the story of Oliver is a human one, relatable worldwide, even in Brazil. This revival was well worth its resurrection.

Curry shines in Karen Zacarías’, OLIVÉRio, which chronicles Oli’s experience in the big city of Rio de Janeiro. She’s a young orphan with a heart of gold among the throngs on the beach to pay homage to Iemanja (Rayanne Gonzales), The Great Mother Goddess of the Sea. It doesn’t take long for everyone, including Iemanja, to take notice of—and be moved by—Oli’s innocence and charm. However, in a dog-eats-dog world, Oli learns tough lessons about what it means to have hope, and share that hope in a world that no longer believes. What ensues is a rollercoaster chain of events with beautiful connections, devastating confrontations and life changing transformation.

The cast is energetic and present, giving 110% of their energy to creating a vivid representation of life in Rio for the haves, the have nots and the i-want-mores. Humorous lines, along with splashes of samba and capoiera, add sprinkles of Brazilian tradition throughout the show. Still, I must say that the music (Richard Miller, Leonardo Lucini, and Bruno Lucini) really put the pulse in this production. Under Miller’s skillful direction, the songs and scores provide a fullness and richness that might have otherwise been lacking.

Overall, this production is an interactive and delightful one with a talented cast. It’s not only educational, but also culturally and morally stimulating. It was undoubtedly a simple delight.