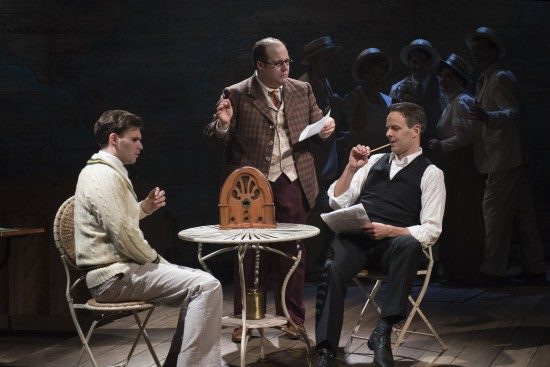 Whether you consider yourself a Sondheim fan or have never experienced Sondheim before, director Gary Griffin has staged a production of Road Show that you don’t want to miss. Written once and then again several times over by Stephen Sondheim and in partnership with John Weidman to create the book for this newest version, this sleek, simplistic, and sensuous show fictionalized the true tale of two early 20th century brothers who loved and destroyed each other and a lot in between.

…get over to see Sondheim’s reinvention at Signature. It’s definitely worth it.

Addison (Josh Lamon) and Wilson (Noah Racey) Mizner set out to make their fortunes together with get-rich-quick schemes in Alaska after the death of their father (Dan Manning), leaving their mother (Sherri L. Edelen) behind. Wilson quickly realises his gift for sweetly swindling others, but his obsession ostracize Addison, who goes on a self-searching mission of his own, eventually discovering his own penchant for personal design. Along their journeys, Wilson woos many women and Addison gets his guy. In and out of each other’s lives–though more out than in–the two brothers circle each other and trade fortune, luck, and barbs back and forth until they are finally forced to decide whether they stand with each other or against one another, and figure out what exactly everything has meant.

Their lives have meant a whole lot of nothing, if you go with the words of a song upon their deaths–just a lot of waste and mess. “He made a mark!” “–Instantly erased!!” the ensemble sings away. But perhaps the journey really is the destination. Certainly the performances of all the actors were absolutely stellar and effortlessly emotive. Racey’s positively snazzy charm just oozed and snapped along with his quick flashing smile, devil-may-care attitude, and “Hey, I have the best idea of your life” spin. Lamon’s restless, open spirit; his broad soul and artistic eye were quickly endearing, particularly when paired with his searingly sarcastic sensibility and quick, deep bite.

This nearly tender but not sappily-sentimental fictionalization of the two painfully human, fascinatingly flawed brothers explores deep within the far reaches of the world to examine the meaning and value of life, love, and the things that bind us together or break us apart.

Brilliant supporting roles by the rest of the cast–half of whom spend much of the evening quietly playing instruments as the accompanying music–keep the story from being too inward, liven up the action as we traipse around with the brothers, and create a dimension in which to better see the humanity in the story.

If you are already familiar with or a fan of Sondheim, many of the tunes in this show will sound eerily familiar–in fact, you may find yourself sitting in your seat humming along to this “new” song or singing quietly along with a different set of words. If you’ve never heard it before–don’t worry! The music is wonderful and alternately catching, provocative, and sobering. You might not come out of the show with a tune stuck in your mind, but then, that might be from being completely overwhelmed in the best possible way by the sensory telling of story.

My favourite song, “Isn’t He Something!” is sung by Mama Mizner as she lies holed up with Addison, reading in the papers about Wilson. “Just watch him glide!” she cries out, and you can see him in her eyes, just soaring shamelessly through the world. Catchier songs like “The Game,” or “Addison’s Trip” or “Boca Raton” (“…just come to Boca Raton!”) keep the pace moving, while songs like “The Best Thing That Ever Has Happened” and many others bring in a lovely variation to the sound scheme.

Road Show may have gone through well over a decade of evolution to get where it is today, and it may see more changes yet. I hope not many more, though, if any. However else you may characterize it, it is a soaring story about the human capacity for passion, ingenuity, and resilience. Sizing, set, props, lighting, and costumes–everything was like a work of art that perhaps Addison, in his tactful times, would have admired. “You didn’t like who you were, so you made yourself over.” Take a tissue, listen to some Sondheim on the way (or don’t), prepare yourself for some good laughs, and get over to see Sondheim’s reinvention at Signature. It’s definitely worth it.

Road Show runs through March 13 at Signature Theatre, and tickets can be purchased online or by calling the box office at 703.820.9771.