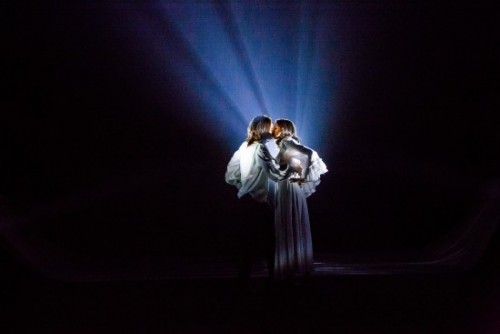 Dynamic director & choreography duo Paata and Irina Tsikurishvili have staged a dark, semi-steampunk but definitely steamy Romeo and Juliet. You may have seen Shakespeare’s Romeo and Juliet before; perhaps even many times over. Until you go see Synetic Theater’s beautiful translation of this famous love story, though, you have not seen it fully. In classic Synetic style, this timeless masterpiece of tragic love unfolds onstage without words. Indeed, putting the beautiful story back into words is rather difficult.

This tale of two lovers unwinds under the heavy whirlygig of time, with a stark set covered in massive clockwork pieces and an ensemble of spinning cogs moving to the tic-toking soundscape. Juliet (Irina Kavsadze) and her Romeo (Zana Gankhuyag) meet at the fateful masquerade and instantly struck by love. Though the chemistry between the two characters seemed a little lacking until Act Three, Irina Kavsadze and Gankhuyag made up for it in full with both the anguish and the wonder of their passion as the chances for their love devolved with time. Juliet’s nurse (Kathy Gordon) and Friar Laurence (Irakli Kavsadze) were both astoundingly well-played and my favorite characters of the evening. Gordon’s nurse kept the show from slipping too far into the melodramatic, garnering lots of laughs with her playful ploys and comedic failures. The quiet but vivid emotions displayed by Irakli’s Friar, particularly when paired with the nearly breathing entity of the church sanctuary where he went about his work, were powerfully evocative and deeply moving as we witness marriage and death through his eyes–and by his hands.

As always with Synetic, the sound, lights, scenery & props, costuming, and choreography are as much a part and character of the play as actors themselves. Technical sounds–clocks ticking and tolling, heart monitors beep-beeping, and much more–tie the audience into the life-line of the story, as tied to time and the way sometimes it slows, sometimes it speeds as the ensnared characters themselves. Actors became part of the props many times over, not only as time-cogs and wheels, but also parts of the church; a human crucifix and breathing objects in the sanctuary.

Lights not only spotlighted characters and cued emotional responses, but served even as a wall of light behind characters, acting like a curtain to shield a background scene change while creating a powerful and deeply lonely image to present to the audience. Vibrant costumes, darker on nearly everyone except Romeo and Juliet themselves, add to the richness and defy the grittiness of the scene, and prove remarkably versatile in all the movement afoot.

There is a lot of movement afoot. Dancing, swaying, running, dodging, epic fist fights digressing into still more epic knife fights, love-making, and dying. Synetic definitely showcases the different forms of movement that it is so well-known for. My personal favorite motion is the fluttering, wing movements–the delicate spirits of the young lovers meeting and flitting together. Absolutely transfiguring.