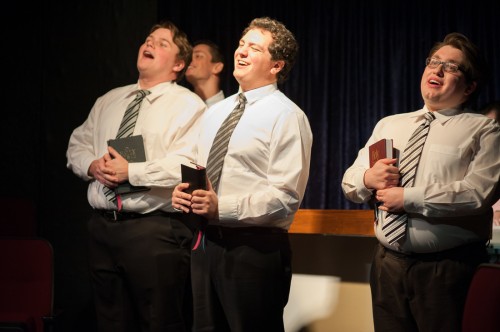 The saga of four choir members growing up in the “Buckle of the Bible Belt” and dealing with their sexuality forms the basis for Southern Baptist Sissies that is currently playing at the Audrey Herman Spotlighters Theatre.  This powerful play by Del Shores that premiered in Los Angeles in 2000 received the GLAAD Media Award for Outstanding LA Theater Production among other honors.

By no means is Southern Baptist Sissies an uplifting work. It realistically depicts homophobia in the conservative religious community and the effect of religion’s rejection of homosexuality on young people. The messages are hammered home through frequent fiery monologues and exchanges between the characters that under the direction of Fuzz Roark, the production is hallmarked by extraordinary performances by the cast.

…the production is hallmarked by extraordinary performances…

Narrated by the idealist Mark, the story jumps back and forth in time using his memory of events and his own attempts at trying to figure out why the Baptist Church preaches love and forgiveness but lambastes homosexuality. He is enraged by this situation and frustrated even more over his childhood friend, TJ, with whom he had a sexual relationship as teenagers. That led to Mark’s falling in love with him, but TJ, influenced by the Scriptures, denied his gayness and tried the straight path towards redemption. He eventually enters into a relationship with a woman.

On the extreme opposite end of the spectrum, Benny fully embraces being gay, at least on the surface, brushes off the Church’s teachings, and becomes a flamboyant drag queen.

In between is Andrew, who is conflicted by his sexual urges and the demands of his faith in the hope of finding acceptance by God.

The Dallas Baptist Church’s anti-gay teachings are brought home by the fire and brimstone preacher, Reily (John Sadowsky) who does not temper his anti-gay rhetoric even after a tragedy at the play’s end.

To provide comic relief, two barflies, an older gay man, Preston “Peanut” LeRoy (played deliciously by Greg Grenier), and a self-described alcoholic Odette (Melanie Eifert) engage each other at a piano bar at various intervals within the play. They gossip about the other bar patrons, discuss their lives, make funny quips (Peanut: “I’m a social drinker.  You’re having a drink, social I”) and create a bond that is endearing.  Both actors are superb and convincing in their roles.

These segments in the play do not have a direct relationship to the core plot of Southern Baptist Sissies—that of the journey of the four boys—other than the fact that the characters are Baptists.  Yet, the comedic exchanges are a welcome respite from the intensity of the remainder of the play.

Another comic sequence is the exceptional drag performance by Benny’s “Iona Traylor.” Singing live as opposed to the all-too-common lip synching device, Mr. Malek’s voice is spot-on and his well-delivered “b****y” comments hit the mark.

Though the play was written at the beginning of the millennium, Mr. Roark, updated it by invoking the names of several homophobic elected officials and presidential candidates into the dialogue—an amusing touch.

Other than these lighter moments plus brief stripping appearances by Mr. Binseel showcasing his well-toned physique, the play is serious with a poignant, thought-provoking theme.

The Peanut character, however, accurately portrays the plight of older gay men in bars back in 2000 and continuing today whereby they engage in gossipy banter, are often ignored and marginalized by younger gay men, and their loneliness could lead them to having to pay for sex. Peanut’s advice to the younger Andrew, drawing on his experiences, provides one of the play’s sweetest moments.

This is a well-cast production with the all the actors performing very competently in their roles. Most notably, Michael MacKay, as Mark, the principal character, ably conveys the wide expanse of emotions required from this part. Tommy Malek as Benny stands out, as does John Sadowsky as the Preacher.  Dennis Binseel, already a Spotlighter’s veteran of six productions, brings much passion to his character for the tense scenes.  Christina Holmes does a good job playing the boys’ mothers.

Credit Accent and Dialect Coach Sherrionne Brown for helping the cast with their authentic deep Southern drawls, which are delivered consistently throughout. Also, Al Ramer deserves a nod for his lighting design that creatively augments the scene changes.

And while this play is not a musical, there are frequent hymns sung by the four main characters whose voices blend beautifully in each number. William Georg is excellent playing organ music in church scenes and piano music in the piano bar.

Southern Baptist Sissies is a serious play about serious issues despite the comedy in the mix.  It primarily sheds light on a subject that touches the lives of many gay people coming to grips with their sexuality while religious leaders and their followers disparage them whether they are in Dallas or anywhere else.

Yes, there are times the dialogue gets a bit too overwrought and the play does not leave any of the characters truly happy. However, the overarching message of the need to love one’s self no matter who you are is an important one.

This well-directed, well-performed production at the Spotlighters should not be missed.

Running time: Two hours and 20 minutes with an intermission.

Advisory: The play contains profanity and sexual situations and is not recommended for children.

Southern Baptist Sissies plays through March 6 at the Spotlighters Theatre, 817 St. Paul Street, Baltimore, MD 21202. Tickets may be purchased by calling the box office at 410-752-1225 or visiting here.