Theatre Review: ‘The City of Conversation’ at Arena Stage 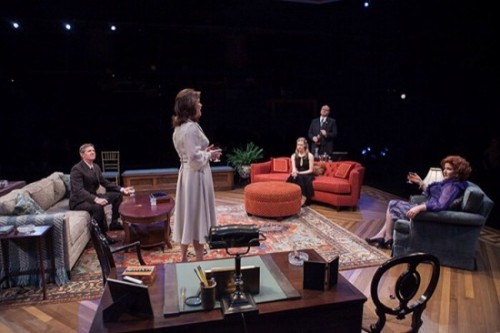 Arena Stage is looking for its voice in DC’s theatre scene and looking at the political scene as a possibility. The City of Conversation certainly has a uniquely DC poignancy with the story unfolding largely in Georgetown and spanning through decades of presidencies and political swings. Written by Anthony Giardina and directed by Doug Hughes, the smart, witty, biting, and ambitious play has (like most of DC) a lot to say.

Hester Ferris (Margaret Colin) revels in her role as a liberal Georgetown “political hostess,” using the haven of her home to help opposing sides rest hostilities and broker resolutions over a tasty meal and a good after-dinner smoke. Her cool maneuvering comes to a frozen stop when her son, Colin (Michael Simpson) brings home Anna, (Caroline Hewitt), his fierce fiancé whose own political views–and agenda–are as polar opposite from Hester’s as the Democrats and Republicans from each other today. With the political drama suddenly a bit too close to home, Hester is forced to weigh her political beliefs against her family ties and decide just what sacrifices are too great to make.

Ann McDonough, in her role as Hester’s sister, Jean, created some hysterical moments with her deadpan humour and the occasional stark contrast between sisters. Michael Simpson had the challenge of portraying not only one character across the decades, but two characters–both of whom felt fleshed out and real. His playing both a father and son and the benefit of easily looking familial while still being quite separate in personality and demeanor. Caroline Hewitt, while not playing a particularly likeable character in my book, managed to command a measure of empathy while still being the sort of character you love to hate.

No matter where you fall in the political spectrum, if you enjoy a good play you should make sure this tops your list. All of the actors shown in their role, though the play does walk a tight-rope in keeping the characters from becoming a bit too monochromatic in their personality and ambition as it attempts to show the extreme polarization possible. Colin’s infusion of humanity into the character of Hester, particularly with the intense and sometimes painful probing of her life and choices were especially poignant–even the grouchiness she displays at the end of the play.

The underlying humour of the play should not go without note, as it certainly provided the audience with both light chuckles and outright belly-laughter. Sometimes dry, sometimes ironic, and other times just downright hilarious, humour is as much a part of the production as the characters themselves–and perhaps my favourite aspect of the show. In addition to simply being funny, the humour present in the play keeps the story from taking itself too seriously or straying into the realm of overdramatic.

While the staging of The City of Conversation had the vibrancy and feeling of a real living room, some of the conversation and certainly some meaningful expressions were lost for at least this audience member at times. It would be interesting to see The City of Conversation produced in a proscenium layout as opposed to in the round. Well designed costumes, set, lights, and sound effects enhanced the experience and clearly embraced the space and sense of the show, and the usage of presidential speech recordings throughout the production made for a fun game of internal trivia.

Advisory: Politics and some language

The City of Conversation plays through March 6, 2016 at Arena Stage at The Mead Center for American Theater’s Fichandler Stage – 1101 Sixth Street, SW, in Washington, DC. Call 202.488.3300 or click here for tickets.