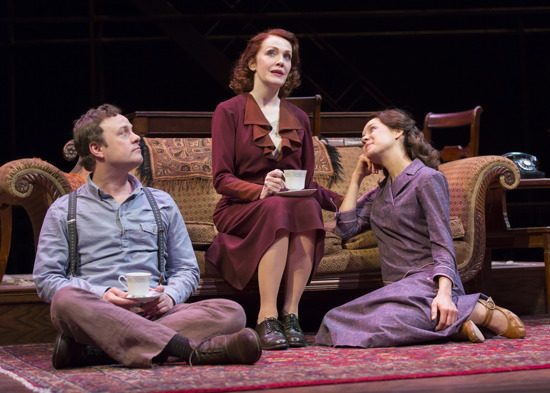 If you’ve ever (as I have) attended a production of The Glass Menagerie lacking the poetry and turbulent emotions inherent in the Tennessee Williams classic, you’ll delight in the current production at Ford’s Theatre.

That also will be true no matter which camp you fall into–those fortunate enough to have seen a satisfying production of the playwright’s breakaway work in the past or those experiencing it for the first time.

Ramont has introduced a few “modern” touches, such as background projections of the characters at the beginning and end, while never taking us away from the time and place of the original play.

When the audience of the January 30th performance erupted in applause at intermission, their connectedness to the magic of the 70-year-old play was palpable.

Relatively little “happens” in The Glass Menagerie in comparison with other plays, but oh, the richness and power of what does.

If all of American drama is about dysfunctional families, The Glass Menagerie is certainly one of the pioneering works in that regard.

The most autobiographical of Williams’s works, it concerns Southern matriarch Amanda Wingfield, deserted by her charming but unreliable husband. Amanda has a push-and-pull relationship with her two adult children, urging them toward independence, yet harping at them to run out the way she wants them to. Amanda is desperate to marry off the painfully shy, slightly disabled Laura, who has retreated into a world of glass animals (hence the play’s title).

Tom, unhappily employed in a warehouse but longing to be a poet, possesses some of his father’s restlessness and impatience with Amanda. Finally yielding to his mother’s nagging to bring home a suitor for Laura, Tom also introduces the reality that frays Amanda’s dreams.

Director Mark Ramont has stated that he wanted to focus more on the tender sibling relationship. In that he has succeeded beautifully, but in doing so has also made Amanda more multi-dimensional than we might have realized her to be before.

Ramont has introduced a few “modern” touches, such as background projections of the characters at the beginning and end, while never taking us away from the time and place of the original play. He has also assembled a wonderful cast, including New York actress Madeleine Potter as Amanda as well as three local favorites.

Potter plays Amanda with a touch of Vivien Leigh in the film of A Streetcar Named Desire, only more stable. We sense that Amanda’s broken dreams are deeper and more deserving of our sympathy than those of a fading Southern belle.

The second Tom Story, as Tom, begins the prologue you know you’ll be hearing Williams’s poetry. He is more than the character—he gives us glimpses of the playwright. You feel Tom’s frustration toward his mother but also his pity for her.

Jenna Sokolowski is a vision of loveliness and vulnerability. There may be a little inconsistency in her limp, but you’ll be completely won over by her sensitivity, her ability both to embrace life when encouraged and to sink into despair when not.

An amiable Thomas Keegan is pitch perfect as Jim, who has not lived up to his high-school glory but also keeps trying to improve himself. Genuinely connecting with Laura, he must at some point tell her the truth—unwittingly precipitating a crisis.

Scenic designer Timothy R. Mackabee’s concept of three-story fire escapes eloquently captures not only the urban landscape of the Wingfields’ St. Louis apartment but the desire of Tom to break away.

The video projections by Clint Allen give the production a dreamy quality.

The production team also includes Dan Covey, lighting designer, and sound designer/composer of the original music, John Gromada. Frank Labovitz’s costumes reflect both the reality of the family’s lives and, when mother and daughter dress for the Gentleman Caller, Amanda’s fantasies.

Advisory: The production is for ages 12 and up.