Theatre Review: ‘You, or Whatever I Can Get’ by Flying V at the Silver Spring Black Box 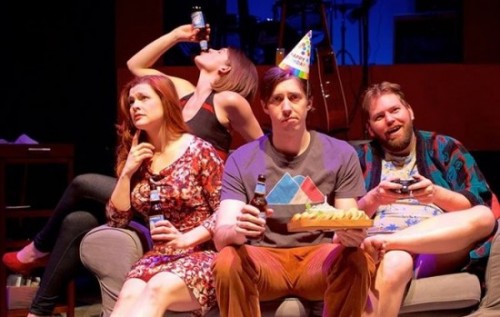 (l-r) Suzanne Edgar, Farrell Parker, Vaughn M. Irving and Doug Wilder in You, Or Whatever I Can Get at Flying V (Photo: Ryan Maxwell)

Flying V’s hilarious but poignant musical comedy, You, or Whatever I Can Get examines love (or the lack thereof) in four Millenials’ lives. Collaboratively written by the four main cast members, director Jason Schlafstein, and musical director Steve Przybylski, the play draws on unfortunately real life experiences to create an insightful, playful, and harmonic story.

Phil (Vaughn Irving) is ready to commit to the act of matrimony only to learn that his intended has other intentions. Returning home, he realizes with a moment of horror, “I’m 30–I’m going to die alone!” and his fear is corroborated by his housemate Victoria (Suzanne Edgar) and buddy Dennis (Doug Wilder), both also 30. Being a good sister, Jen (Farrell Parker), who also lives with Phil, can’t really resist to point out that the three of them really are old while she is still only in her mid-20’s. (“You’re 27–that’s not mid 20’s!”) Parker and Wilder really drove the story for me, though Edgar and Irving were also quite compelling, and Edgar’s solo about love with the metro and rain montage was a favorite moment and served to highlight the artistry in the production, as well.

Over the course of the production, we watch as Phil desperately grapples with his new loss and his deep fear of being alone, while learning to navigate the strange world of modern dating (and seeing anyone new at all). While he strikes out again and again, Victoria, Jen, and Dennis all have their own battles for love to fight. All four of them must learn what winning in love really looks like–a stranger in your bed the next day? A cybergasm through a facetime date? Shooting the fish in the gills? And did their parents know what they were doing, or does anyone ever?

There’s no question that the cast can sing, their voices bending and blending together in sometimes tender, sometimes raunchy, but always lovely harmony. Complete with a live band on a “stage within a stage” set, the music and lyrics throughout the production where fun, engaging, and occasionally even induced some goosebumps or misty-eyes. Given that most of the play is delivered in lyrical format, however, the volume of background instrumentals could stand some lowering.

Staging of the play was great, and the space was well used–particularly the rotating floor that enabled lots of late night wandering from wrecked hearts. Costumes could have wandered in straight off any millenial on the street, though I did appreciate the subtle irony of some of the shirts, Darth Vadar’s comforting presence, and the degree to which the clothes signaled both the state of mind and the personality (donned or natural) of the four friends. There seemed little reason visible for drawing Victoria’s underwear cyber-sex scene quite so long, and less reason for Dennis lounging in his birthday-suit alone–though it was nice to see the nudity not relegated only to female cast members but spread out more equitably. It seems as if those aspects of the story could have been shared as honestly, though perhaps less comedically, with less exhibition.

Overall, You, or Whatever I Can Get is a great, young production that, while it could perhaps still use a few book tweaks here and there to tighten the plot and keep the characters true, was presented by a fiercely talented cast and is disarmingly funny, uproariously witty, and bitingly honest. Go see it while you can–and know that the signs on the cabaret style tables set up around the stage say, “Yes! You CAN sit here.”

Show runs through March 27, 2016 at the Silver Spring Black Box, 8641 Colesville Road, Silver Spring, MD. Tickets can be purchased online or at the door.