‘A Quick 5’ with Nora Achrati 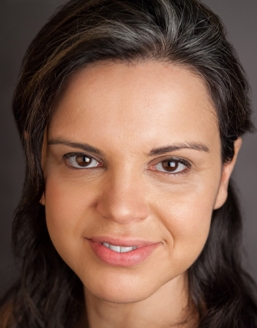 Nora Achrati makes her Theater J debut this evening in the world premiere production of Falling Out of Time where she portrays The Midwife. Some select area credits include Henry IV, Parts 1 and 2 at Brave Spirits Theatre, The Admission at Studio Theatre, Tiny Island at Washington Stage Guild, The Norwegians at Scena Theatre, Scapin at Constellation Theatre Company and Church, The Last Days of Judas Iscariot and Agnes Under the Big Top: A Tall Tale for Forum Theatre. On the DC theatre festival circuit you might have seen Nora in The House Halfway at Source Festival or Sanyasi and Boston Marriage at Capital Fringe. Nora is a graduate of the honors program at Theatre Lab School for the Performing Arts which is where we first met. I was also fortunate enough to work with her on Boston Marriage. She is a newish (less than a year) mom to a son named Omar and is married to area performing artist Bradley Foster Smith. How does she juggle it all? Read question four for the answer.

Falling Out of Time will be a new experience for those that are use to seeing traditional proscenium plays at Theater J. I won’t give away why this is but one of the high points cast wise is Nora Achrati. She of course is in very good company as with all Theater J productions. Here is a young lady I feel fortunate to have worked with and no matter how many shows I see her in, the result is always fantastic. The show plays through April 17th so check out Nora Achrati and company in this one of a kind staging for Theater J. The chance to see something new and exciting should be reason enough for you to attend. With Nora Achrati in the cast, it just ramps it up that much more.

What was your first professional performing job and when did you know you wanted to become an actress?

My first paid acting job was a role in a friend’s sci-fi pilot. For me, it was only a weekend of filming, but it took a couple of years for the production team to finish the VFX, so I only saw the finished product last year.

My first paid theater gig was a piece at the DCAC called My Comic Valentine, a live-action adaptation of a few ‘50s romance comics – cheeky, cheesy, and totally delightful, just a lot of fun to do.

Can you please tell us something about the character you play in Falling Out of Time and also talk about the show itself?

The play is about finding your way back to life through immense grief. Every character is searching for a way to articulate her or his grief, to move beyond the paralysis that can claim the living when a loved one dies.

Derek Goldman, our director, adapted the script from the novel of the same name by Israeli author David Grossman, who wrote it because of the death of his 20-year-old son – which may make you imagine it’ll be unbearably dark. It’s not. The beauty of both the novel and the play – one of the beauties – is that in fact it’s full of life and connection and hope. It’s really deeply invigorating.

And although the story came out of very specific, very personal circumstances, it’s not really connected to any identifiable time or place. The setting in an unnamed village; the characters have titles instead of names. Mine is The Midwife. Her particular paralysis, as written, manifests itself in a speech impediment, which has been interesting to explore. As is her relationship with her husband, The Cobbler (played by Rafael Untalan).

Derek has pulled together an incredible production team, and they’ve been imagining some beautiful and really interesting dimensions for the piece. It’s going to be a very different kind of theatrical experience for Theater J regulars. 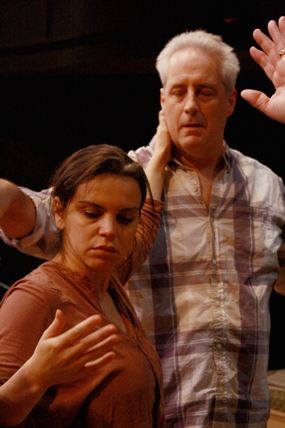 Nora Achrati and Michael Russotto in rehearsal for Theater J’s production of Falling Out of Time. Photo courtesy of Theater J.

You received training at the Theatre Lab School of the Dramatic Arts. How did Theatre Lab prepare you for your professional career?

Acting was a career change for me, and the Honors Conservatory at Theatre Lab – their year-long program – gave me a really useful set of tools for making that change. I didn’t know a lot about the craft going in – I just knew I liked being in plays – and I didn’t know anything about the business. The Conservatory was fantastic for introducing both, and for setting us on a path to keep growing after we left, in whatever direction we wanted. Theatre Lab pulls in some of the best working actors and directors in DC to teach and to serve as guest artists in their performance classes. And the program itself is run by wonderful people – Deb Gottesman and Buzz Mauro are completely devoted to the work of theater-making, and they’re also completely devoted to the idea that that work can serve a greater purpose in the world. It’s theater instruction without ego – they really just believe in people and in the work.

You are married to actor Bradley Foster Smith and you recently became parents. How does one balance being a new mom and getting back onstage and does it help matters that your spouse is in the same profession?

We’re both non equity freelance artists without traditional day jobs, so we were doing a crazy dance to begin with in order to chase work, pay our bills, and keep our schedules coherent. Most actors knows how this goes.

I really had no idea before having our son how big a monkey wrench childcare would throw into the mix. Every theater family struggles with it – I think it’s the first conversation theater parents have with each other: “So how do you…Who watches…What are you doing about…?” I feel like we’re all hoping somebody has a magic answer.

The cost is enormous, especially in this area – daycare prices here, like housing, are among the highest in the nation. And traditional daycare hours don’t work for covering evening rehearsals. It’s hard to make a wage that justifies the price of daycare or a sitter, but forgoing paid childcare often means giving up work.

Three things have helped me and Brad tremendously: first, my parents are here and invited us to move in with them while we find our feet. They’re our primary housing and childcare support, and having that safety not only helps us now but also allowed us to take some time off from working when our son was first born, because freelance workers don’t have paid parental leave.

Second, we receive assistance from the state for our healthcare. Third, the theater community is incredibly generous. I can’t stress that enough: artist friends babysit for no money; stage managers carve out time and space for pumping; directors are merciful and understanding about time constraints.

In other words, it takes a village.

We’re still negotiating what’s going to happen with our careers going forward. I know a lot of theater parents have taken time off from performing – years, in some cases – and come back to it once the kids are older. That may be what one or both of us ends up doing. But we’ll see. I’d be interested to hear the perspective of other theater parents, especially dads.

After Falling Out of Time what is next for you performance wise?

I’ll be taking a break for a little bit.