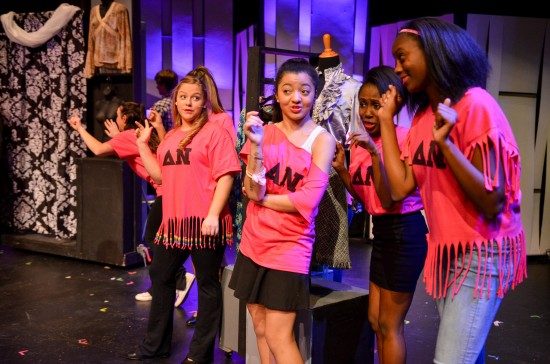 When the cast and crew of Bullis School were called to the stand to put on Legally Blonde, they did the show justice by mounting a hilarious, surprisingly moving production.

The story of Legally Blonde follows the academic endeavors of Elle Woods, a sunny sorority girl who attempts to win back the heart of her ex-boyfriend by enrolling at Harvard Law School, but ends up getting more than she bargained for. It was originally a novel by Amanda Brown before being adapted into a film in 2001 starring Reese Witherspoon. Its success spawned a sequel in 2003 and ultimately a Broadway musical in 2007.

Sophie Glassman had a full time singing job in the starring role of Elle, and she did not disappoint. Her gorgeous voice never seemed to tire, and as such, it never got tiring for the audience. She managed to convey her character’s gradual evolution throughout the show without losing her cheerful personality. Leading the show with her was Will Evans, who endeared himself to the audience as the likable underdog Emmett. Those going into the show expecting nothing but laughs were taken aback by the genuinely heartfelt duets between Emmett and Elle in the second act.

Apart from the two leads, the other memorable performances were almost too many to name. Julia Lowenthal in many respects stole the show as Elle’s sassy beautician Paulette. Nicolas Cala (Professor Callahan) and Adam Schwager (Warner) were despicably scummy in their antagonistic roles, while the Greek Chorus of Siena McKnight (Margot), Maddie Mancuso (Serena) and Emma Bookoff (Pilar) could only be described as harmonic, both musically and comically. It would also be a travesty not to mention Justin Chapin (Kyle), who played a beefy mailman with a secret that had the audience doubling over with laughter when revealed. Several of the performers struggled with enunciation and comedic timing, but the personalities they created came through very clearly.

The colorful set pieces added pizzazz to the show’s most exciting numbers, such as the especially funny “There! Right There!” and the show-stopping “Legally Blonde Remix,” in which Sophie McIntyre (Vivienne) was given a much-deserved chance for her vocals to shine. The stealthy running crew was frequently called upon to move props and set pieces around, sometimes at inconvenient times, yet they mostly went unnoticed and almost never distracted from the performers.

The sound crew had a particularly difficult job due to the show’s many solos and heavy dependence on body mics. With that in mind, there were fewer sound issues than expected from a high school production of such a difficult show.

Bullis School showed competence and aspects of professionalism in their production of Legally Blonde. They told the story faithfully and made it captivating for both those new to the show and for those who knew every word by heart.