Concert Review: “The President’s Own” United States Marine Band at The Music Center at Strathmore 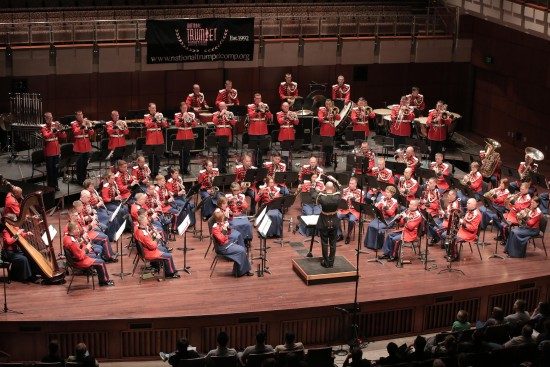 When we listen to music from the movies outside of the original films, we generally do it in a concert hall with a big symphony orchestra. We are also use to hearing the music played with a sizeable string section.

Now take that image and toss it out because the United States Marine Band came into the Music Center at Strathmore last evening and took us on a musical journey through the decades of Oscar winning film scores that rivaled any concert of this nature by a larger musical ensemble.

…the walls of Strathmore shook like they never have before.

Under the direction of Lieutenant Colonel Jason K. Fettig, the program started out with a big bang with the “March from El Cid” by Miklós Rózsa and transcribed for band by Robert Hawkins.

Next up was music from the Errol Flynn classic The Sea Hawk featuring a suite of Erich Wolfgang Korngold’s themes transcribed by Jerry Brubaker.

You may be asking “What is a transcription?” A transcription is taking the original orchestration and making it fit to the needs of a particular ensemble. The US Marine Band does not carry a large string section so all those parts have to be revoiced for other instruments. See, you always learn something here at MDTG.

With Richard Addinsell’s “Warsaw Concerto” from Dangerous Moonlight (Suicide Squadron) we got to hear the only piece on the program that crossed over from film to being part of the classical repertoire for many pianists. In this case the soloist was GySgt Russell Wilson. His precision and overall performance was as good as Horowitz or any other classical pianist you’d care to name.

With eight French horns onstage, I imagine playing Bernard Hermann’s “The Death Hunt” from On Dangerous Ground was a no brainer. From the first notes of Paul Lavender’s transcription, the walls of Strathmore shook like they never have before.

Other composers represented included John Barry, Sir William Walton and Johann Sebastian Bach. Yes Bach does qualify because his “Toccata and Fugue in D minor, BWV 565” has been used in countless films including Disney’s Fantasia.

A big part of the evening was devoted to John Williams and that is just fine with me. He is by far my favorite film composer and with 50 Oscar nominations to his credit, many others feel the same way.

As Williams is a huge supporter of the US Marine Band, the arrangements used were mostly created for the ensemble by Williams himself and his principal arranger Paul Lavender. I actually never thought I’d say this but the charts for the suite from Lincoln sounded so full I almost didn’t miss the strings. Almost being the operative word.

Ending the evening was the world premiere suite of music from Star Wars: The Force Awakens with transcription again by Lavender and the main theme transcribed by Stephen Bulla. I was told the band received the music for this piece only three days ago but you could have fooled me. The encore of “Flying” from E.T. was an added bonus.

Fettig was fun to watch on the podium and was very comfortable with a mic in his hand. You saw the intensity he had for the music and this translated to the players in their performance.

Overall, the US Marine Band’s program entitled Double Feature: Music of Adventure, Danger and Drama on the Silver Screen did not disappoint in any way. If you have a chance to catch this ensemble anywhere, please jump at the chance. The music is great and so is the musicianship.

Now everyone sing along:

From the Halls of Montezuma
To the Shores of Tripoli;
We will fight our country’s battles
In the air, on land ,and sea;
First to fight for right and freedom
And to keep our honor clean;
We are proud to claim the title
of United States Marine.

Our flag’s unfurled to every breeze
From dawn to setting sun;
We have fought in every clime and place
Where we could take a gun;
In the snow of far-off Northern lands
And in sunny tropic scenes;
You will find us always on the job–
The United States Marines.

Here’s health to you and to our Corps
Which we are proud to serve
In many a strife we’ve fought for life
And never lost our nerve;
If the Army and the Navy
Ever look on Heaven’s scenes;
They will find the streets are guarded
By United States Marines.

Now you can feel as good as we did in the concert hall.

Running Time: Two hours and ten minutes with one intermission.