Theatre Review: ‘110 in the Shade’ at Ford’s Theatre 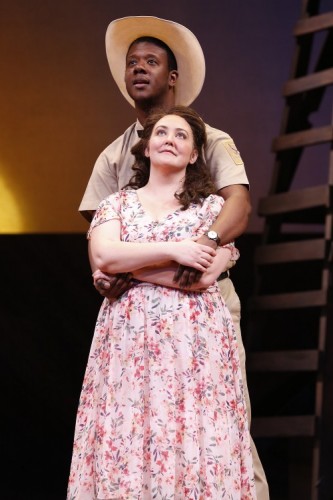 The 1963/64 season on Broadway was a weak one as far as musicals go. We had little gems like Jennie, Here’s Love and one that actually had lots going for it. I’m speaking of 110 in the Shade, the musical based on the hit play and film The Rainmaker. Producer David Merrick had N. Richard Nash adapt his play into a musical and hired the team behind The Fantasticks, Tom Jones and Harvey Schmidt to write the score. The result was a gem of a show that should have run longer than 330 performances. Unfortunately David Merrick’s other show later that season swallowed it and everything else that opened that year. You might have heard of it….Hello Dolly!

Very few professional productions of 110 in the Shade have been produced. There was one at Signature Theatre in 2003 and Audra McDonald was fantastic in Roundabout Theatre Company’s version on Broadway a few years back. Now Ford’s Theatre is giving musical theatre aficionados a chance to see a show that many only know from cast recordings.

Tracy Lynn Olivera is a leading lady of the highest order and her performance as Lizzie Curry is one that’s going to be hard to beat this season.

As the story goes, we are in the middle of a drought in 1950s Texas and “It’s Gonna Be Another Hot Day.” Here we meet Lizzie Curry (Tracy Lynn Olivera) a girl who suffers from low self esteem and refuses to let any man into her life. Her father H.C. (Christopher Bloch) and two brothers Jimmy and Noah (Gregory Maheu and Stephen Gregory Smith) think it might be a good idea to try to convince the introverted Sheriff File (Kevin McAllister) to go with them to the picnic to ask Lizzie about maybe getting together for a date. File refuses opting to stay reclusive in his office. Lizzie’s low self esteem isn’t helped any by the fact that Noah keeps telling her she’s plain and won’t ever find a guy. Everything changes when a con man named Starbuck (Ben Crawford) literally rolls into town on a wagon and promises to make it rain. Many are skeptical including Noah but H.C. gives Starbuck $100 believing rain will come to the parched town. Because Starbuck plays on people at their lowest point, he seduces Lizzie. Some would think this is good for her esteem. After all, Starbuck tells her she is pretty and not to believe anything Noah says to her about her looks. How does it turn out? Does Lizzie end up with Starbuck or File? Does it rain? Is Tracy Lynn Olivera a true leading lady?

The first two questions will come clear after you see the show. The answer to the third question is a resounding yes! Tracy Lynn Olivera is a leading lady of the highest order and her performance as Lizzie Curry is one that’s going to be hard to beat this season. You just want it to go well for Lizzie and Olivera paints a poignant and strong portrait of a young lady that is beautiful inside and out, even if she doesn’t believe it. Olivera’s singing knocks it out of the park every single song. How does she do that? You have “Love Don’t Turn Away” where Lizzie is hopeful of meeting someone, and the duet “A Man and a Women” with McAllister as File. The vocal blending between the two is something special to be sure. But perhaps her “Is it Really Me” is Olivera’s crowning vocal achievement. It’s at the point in the show where Lizzie finally realizes she is beautiful thanks to Starbuck. You are held from start to finish by Olivera’s much deserved star turn.

There are other wonderful performances to talk about as well. Kevin McAllister with his strong presence and deep voice gives File lots of mileage with not a lot of stage time. I kind of wish they added the song “Why Can’t They Leave Me Alone” for File to sing in this production though. Jones and Schmidt wrote it for a New York City Opera production in the 90’s It sets File up a little better and gives him a solo to sing. Let’s face it, don’t you all want to hear a Kevin McAllister solo turn? Well, you’ll have to wait until Ragtime at Ford’s Theatre next season for that but the “Poker Polka” performed with Bloch, Maheu and Smith plus the aforementioned “A Man and a Women” with Olivera should hold you until then.

Other standouts include Christopher Bloch, Gregory Maheu and Stephen Gregory Smith as the rest of the Curry clan. All three men give solid performances and Maheu’s turn called “Little Red Hat” with a spitfire named Bridget Riley as Snookie Updegraff is a definite musical highlight.

Director/choreographer Marcia Milgrom Dodge has done a disservice to Ben Crawford’s portrayal as Starbuck. His entrance introduces him as this over the top Elvis like gyrating cartoon type of character. By doing this, it kills any shred of credibility and trust that Starbuck is trying to build. Even though he is a con man he has to be believable enough for his schemes to work. The way Dodge has it, he comes off as a loose cannon. I feel bad for Crawford because he has a great voice and in songs like “Melisande” and “Evenin’ Star” Crawford makes a really good showing.

The orchestrations are basically the charts used at Signature Theatre in 2003 and were scored by the master himself, Jonathan Tunick who later orchestrated the Audra McDonald version. Even though there are only eight players including maestro Jay Crowder in the pit, everything sounds nice and full. There are homages throughout to Hershey Kay who orchestrated the original production and we get to hear some of Billy Goldenberg’s dance music as well. Robert De Cormier’s choral work is expertly executed by an ensemble that features such talent as Chris Sizemore, Ines Nassara and Maria Egler. Maestro Crowder has once again brought out every nuance in the vocal work for an audibly pleasing wall of sound.

Michael Schweikardt’s rustic town setting and roll on wagon gets us in the right mood for the evening as do Wade Laboissonniere’s costumes and Matthew Richard’s lighting.

Why isn’t 110 in the Shade produced more? After seeing the Ford’s Theatre production you will be asking the same question. Tracy Lynn Olivera’s performance alone is reason enough to see this show, but when you add in her cast mates singing the underrated Jones and Schmidt score and attractive physical production, you will fully appreciate why Broadway should have been singing “Lizzie’s Comin’ Home” as opposed to “Hello Dolly.”

Running Time: Two Hours and fifteen minutes with one intermission.