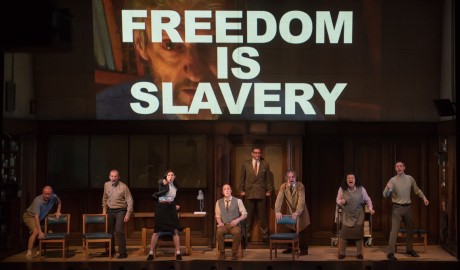 The cast of 1984. Photo by Ben Gibb, courtesy of Headlong Theatre.

In an age when ideological purities of both the left-and right-wing variety have come to dominate our presidential politics, and when utterly normal words are constantly re-defined by left and right-wing media outlets—usually in negative terms—it should come as no surprise that the time for George Orwell’s 1984 has come around again.

But this time with a twist: because although the tale of Winston Smith remains as compelling as ever, we seem to have forgotten that Eric Blair, writing under the pseudonym ‘George Orwell,’ was careful to present the story of Winston Smith in the context of an academic treatise.  It’s not his story so much as its broader historical context that counts.

It’s somewhat reassuring that Blair gives us a book indicating that the totalitarian state, Big Brother et al., tried but failed in its attempts to harness language and nation to its will.  But it’s still hard to look at it all without a shudder of horror.

You know you are already destined to see this spectacular, disturbing production by Headlong now at the Shakespeare Theatre’s Landsburgh stage; but before you go, be sure to have a look at that curious “Appendix:  The Principles of Newspeak” at the back of your well-read, now-coverless paperback edition.  Linger for a moment over the fact that Blair wants you to take a more objective view of Smith’s story; who knows, he seems to say, whether this was published as late as 2050?  Or even later?

This is the starting point for Robert Icke and Duncan Macmillan’s brilliant adaptation of the novel; our protagonist Smith has come unstuck in time, toggling back and forth between the nightmarish world of Big Brother and a university seminar in which a tweedy, shabby-haired professor leads a discussion of Smith’s story’s meaning.  Scenes change in a flash (literally – Natasha Chiver’s astonishing light design is truly glaring at times) and accompanied by the haunting question, “Where are you now?”, a question for which Smith has only a provisional answer.

If this is confusing, it’s half the point; go along with it, because the disorientation of Headlong’s 1984 helps you to make that journey to the lowest circle of Hell right alongside Winston Smith.  This is a violent journey, not for the faint of heart.  It begins in the comfort of Chloe Lamford’s finely-appointed, wood-lined classroom-cum-archive, with comfy-cushioned chairs and antiquated glass windows; it ends in Lamford’s bleak, white-walled torture chamber where Smith is brutally forced into abandoning every shred of his humanity.

Matthew Spencer’s Winston leads an excellent cast, whose finely-tuned performances give vivid life to the humanity and menace of Big Brother’s regime.  Each character has her secrets, veiled in varying degrees, and we are confronted with the fact that nobody—not even Winston Smith himself—is truly innocent.  Stephen Fewell charms us as the professor-cum-archivist Charrington, Hara Yannas seduces us as Winston’s partner Julia, and Tim Dutton commands our absolute, undivided attention as O’Brien, the double-breasted Satan who seduces and condemns Winston to his fate.  (Dutton’s be-spectacled resemblance to former Texas governor Rick Perry is truly unnerving).  Sound designer Tom Gibbons provides the occasional surreal touch with snatches of 1930’s British crooner Al Bowlly and a hint of Billie Holliday thrown in for good measure.

One note about the violence:  the book has plenty, and if you are at all squeamish you might plan to start leafing through your program, in your lap, when the final interrogation in the Ministry of Love’s infamous Room 101 begins.  The disappearance of wood panels and the stark flourescents of a white-walled room will be your cue …

So you really must see this 1984, if it hasn’t already sold out.  But because there are no innocents here I would urge you to consider, in this most partisan of seasons, the ways in which we are constantly being manipulated by our gadgets and our mainstream media to adopt the very principles of thought and language that Blair/Orwell argues against here.

Think freely, while you still can.