Theatre Review: ‘After the War’ at Mosaic Theater Company 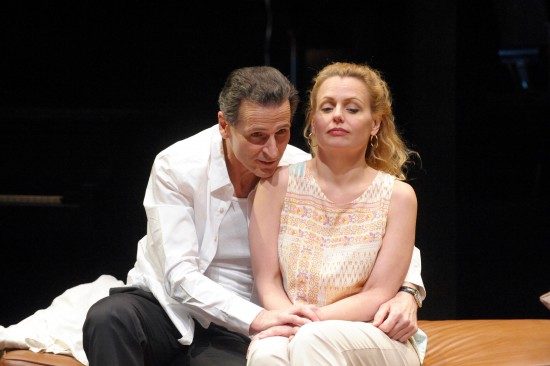 A dissident musician, a concert pianist, returns to his homeland and attempts—however awkwardly—to reconcile with his estranged family.  That alone is the stuff of drama; but when the pianist is an Israeli and he arrives in the wake of yet another tragic episode in the Israeli-Palestinian conflict, an already intense play can go from incendiary to nuclear in the blink of an eye.

Mosaic Theater’s founding Artistic Director, Ari Roth, has worked for years with Israeli playwright Motti Lerner; their past collaborations at Theater J have generated great controversy—and a share of well-earned Helen Hayes nominations.  Now that both are liberated from the constraints of their former venue, it is gratifying to see that Lerner’s keen eye and his compassion for both sides of Israel’s bitter debates have matured even further.

…After the War is a truly remarkable piece, remarkable for its honesty, its respect for both sides, and its burning desire for peace with justice for two nations that have suffered so much.

Lerner’s latest work, After the War, is a bold interrogation of a peace movement whose time—if there ever was one—seems to be vanishing before our very eyes.  The quest for humanity, and the desire to preserve some sense of humanity for all involved, is more futile than ever.  In a lesser writer’s hands, the blame for the conflict would rest entirely on one side or the other; but Lerner casts a cold eye on us all, forcing us to reflect deeply on our selective compassion and the destructive forces that are unleashed when our one people’s suffering blinds us to everyone else’s.

At its best After the War deftly weaves the personal and political; familial and national battles are on the tip of everyone’s tongue it seems.  There are signs of tinkering with the script, however, which can be distracting; originally conceived as a complete 2-act play I saw a whittled-down, one-act version with some obvious signs of edits.  The character revelations sometimes came so fast, out of the blue, as to seem arbitrary and I would imagine further edits will be in the works over the next few weeks.

Standout performances include Paul Morella as Joel, the pianist who, upon his return to Tel Aviv, has been invited by none other than Zubin Mehta to play Beethoven’s famous “Emperor” concerto.  Joel’s fondest hope is to have his family attend, with his mother Bella – the inimitable Barbara Rappaport – in the front row.  The house is a musical one, and the family piano is featured front and center as Joel warms up with snatches of another Beethoven classic, the “Pathetique” sonata.  Freddie (played by the passionate James Whalen) is Joel’s non-musical sibling, and clearly resents his brother for his Palestinian advocacy—and for leaving the family behind for 18 years.

Navigating among the old family disputes are two outsiders, the Romanian émigrés Trudy (Bella’s nurse) and her estranged husband Bernard.  Trudy is a pianist in her own right and is hoping to return to the concert career she was forced to leave behind when the Communist regime fell.  Tonya Beckman gives us the level-headed ambition of Trudy, a woman who knows she deserves better, while Michael Tolaydo provides wonderful comic relief with Bernard’s bumbling and shameless (let alone uninvited) mooching.

Joel has also come to Tel Aviv to re-connect with his son Izzy (Guy Kapulnik), who has served in the recent conflict in Lebanon.  Izzy’s traumatic experience, poorly hid and only grudgingly revealed, sets the tone for the second part of the play, and Kapulnik fully embodies the anger and frustration of a young soldier whose sacrifices are scarcely acknowledged, let alone respected within his own family.

Director Sinai Peter has done some fine work with this cast; the difficulties with the show’s rhythm seem to be the result of recent edits but as the rough edges smooth out this should be an outstanding work that deserves repeat productions across the country.  Less successful here is Frida Shoham’s set design, which punctuates the space with columns for little apparent reason and only provides a partial screen for film footage whose visual marginalization belies its centrality to the plot.  Sound designer Eric Shimelonis does a superb job, however, creating the musical accompaniment – much of which is ‘played’ by the characters onstage.

Contrary to popular belief, it isn’t essential that every show you see be spit-shined and polished; quite often the most moving performances are those with rawness and that much-maligned “work in progress” feel.  So although I may annoy some with my nit-picking here, After the War is a truly remarkable piece, remarkable for its honesty, its respect for both sides, and its burning desire for peace with justice for two nations that have suffered so much.