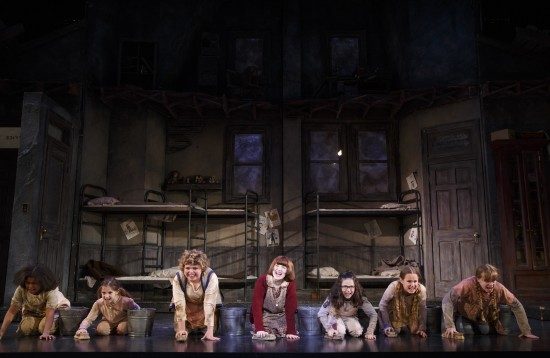 In 1976 the beloved family musical Annie premiered at Goodspeed Opera House in East Haddam, Connecticut. At the time no one thought a musical based on a comic strip would run on Broadway. Previous attempts in the genre had failed including It’s a Bird, It’s a Plane It’s Superman which was also written by the composer of Annie Charles Strouse.

Here we are 40 years later and with the current national tour of Annie, a whole new generation gets to experience this classic musical the way it was pretty much originally presented when it premiered on Broadway in 1977. It features the original staging by the show’s librettist Martin Charnin, choreography by Liza Gennaro who is recreating her dad Peter Gennaro’s original dances and William Berloni again training the dogs Macy and Sunny who play Sandy. It should also be noted that Annie’s original pre-Broadway tryout was here in DC at the Kennedy Center so you could say the show has come home again.

I highly recommend you bring your whole family to Annie…

Over the years many productions of Annie have tried to gloss over its seriousness. It isn’t just about the cute girl in the red dress that finds happiness in the person of Oliver “Daddy” Warbucks or just about the orphans. This is a serious musical about one of the worst times in America in the last century, the Great Depression, so seeing it the way the writers intended it to be seen just proves the old adage “If it ain’t broke, don’t fix it.”

Thomas Meehan’s book tells the story of Annie (Heidi Gray) who is one of seven orphans at a lower East Side orphanage run by the alcoholic Miss Hannigan (Lynn Andrews). They are pretty much treated like workhorses as they scrub the floors and make the beds for their lush boss. After waiting for her parents to return for eleven years and a failed escape attempt, Annie’s luck begins to change for the better. Oliver Warbucks’s secretary Grace Farrell (Chloe Tiso) comes to the orphanage looking for an orphan to spend Christmas at Warbuck’s mansion. Annie is the lucky recipient much to the chagrin of Miss Hannigan. Oliver Warbucks (Gilgamesh Taggett) is the richest man in the world but even the depression has had its effects on him with many of his factories closing. While Annie is enjoying herself, Hannigan with her brother Rooster (Garrett Deagon) and his dumb blonde girlfriend Lily St. Regis (Lucy Werner) cook up a scheme to get Annie back after Warbucks offers a 50,000 reward for anyone who can prove they are Annie’s parents. I imagine you all know what happens from here and for some of these characters it’s not a walk down Easy Street.

Performance wise the cast is as good as any I’ve seen play the show. I saw Andrea Mcardle and Dorothy Loudon originally so this is really saying something for this current group of performers.

As Annie Heidi Gray belts out the “Let it Go” of its time “Tomorrow” like nobody’s business and her acting matches her strong voice. She has the grit needed for the toughness of her character but also shows her vulnerable side later on.

Gilgamesh Taggett as Oliver Warbucks started out a little less gruff than I am use to seeing but as he warmed up to Annie his softer approach totally worked. His gorgeous vocal take on the underrated balled “Something Was Missing” is a true highlight of this production.

Lynn Andrews as Miss Hannigan blows the roof off with “Little Girls” and while the character is undesirable, Andrews’s performance brings laughs to a character that could be scary. It’s a wonderfully balanced performance.

Then we have the orphans Molly (Annabelle Wachtel), Pepper (Molly Rose Meredith, Duffy (Casey Watkins), July (Bridget Carly Marsh), Tesse (Sage Bentley) and Kate (Emily Moreland) who give it everything they’ve got in their two features “It’s The Hard Knock Life” and “You’re Never Fully Dressed Without a Smile.” To say they leave everything onstage is an understatement.

While I did not find Garrett Deagon’s take on Rooster as slimy as I would have liked, his performance of “Easy Street” with Lucy Werner’s deliciously ditzy Lily and Andrews more than made up for it.

I very much enjoyed Chloe Tiso as Grace Farrell as she tries to hide her feelings for her employer and Jeffrey B. Duncan does a stellar job as F.D.R..

I also want to call out Todd Fenstermaker as Drake the Butler for keeping those servants in check with his stern presence throughout.

Considering this tour has been out for a year and a half, Beowulf Boritt’s sets don’t seem to show any wear from being loaded in and out of each venue the show plays. Everything still looks pristine and that is an accomplishment for a tour that’s been out for awhile. Likewise for Suzy Benzinger’s costumes and Ken Billington’s lighting is as always masterfully executed.

While many tours use recorded tracks and digital enhancements, this one carries an eleven piece orchestra under the direction of Kelly Ann Lambert. It’s a pleasure to hear Keith Levenson’s lovingly done reduction of Philip J. Lang’s original orchestrations. What’s even more pleasurable is hearing the full overture, which many productions chop plus hearing Peter Howard’s original dance music again was just heavenly.

Martin Charnin has once again proved that his original staging is the best for the material. It never panders to the audience and isn’t cutesy poo like some other productions I’ve seen. The heart of Annie is how bad circumstances can turn good so when you gloss over that you do the show a disservice.

It is for this and all the other reasons already mentioned that I highly recommend you bring your whole family to Annie playing this week only at the National Theatre. Trust me, “I know you’re gonna like it there.”

Running Time: Two hours and 30 with one intermission.

Annie runs through March 20th, 2016 at the National Theatre which is located at 1321 Pennsylvania Ave NW, Washington, DC 20004. For tickets, click here.