Theatre Review: ‘Falling Out Of Time’ at Theater J 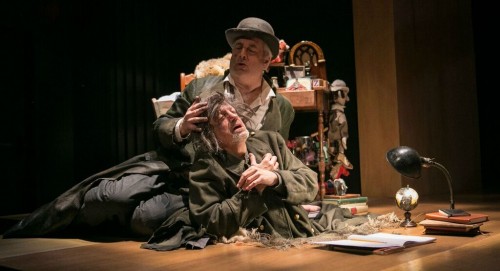 “I wish I can take away the memory, and leave the pain.” –The Walking Man

Falling Out Of Time, the world premiere play based on David Grossman’s absorbing bestselling novel about personal grief and the journey for understanding, is spellbinding. And it should come with an advisory to theatre-goers– (though harder for members of the press)–sit down, breathe deeply, and let go. Even close your eyes to let the words drizzle down over you, as Theater J’s production invokes a subliminal dreamlike state for the observer.

Grossman, an Israeli writer of international renown, crafted this fable to come to terms with his grief over losing his son in the 2006 Middle East conflict—and his cathartic journey to recovery.

In fact, Grossman was heavily criticized by the hard right factions in Israel for giving a human voice and heart to casualties incurred during the hostilities. But both the book and the play adaptation give us a nameless village in anywhereville and a sampling of people that bear no ties to a place or prejudice. Direction and adaptation by Derek Goldman with a translation by Jessica Cohen, it is a loosely structured allegorical tale.

Amongst the characters we meet slowly wandering in or around the theatre (or actually impaled onstage–more on that later) is the Man (Joseph Wycoff, portraying gravitas without sensationalism) accurately known as the Walking Man in the book. He shares that he must go to ‘where he is.’ His Wife (Erika Rose, in a hauntingly effective performance) stays behind, the only link to the group’s real life, intoning to her husband “How can love continue, when in such deep love he was conceived?”

Thus begins the journey, filled with similar poetic sledgehammers as he enters his own memories and is joined by others who have a story to tell about their lost child. We meet the Town Chronicler, (Michael Russotto nimble and in fine form) as the soul that searches for answers from all.  The Man now paces in widening circles around the village and slowly picks up other distraught, grief-stricken figures—the Midwife, the Cobbler, the Elderly Math Teacher — each ready to join the journey to nowhere, each in the grip of a staggering loss. There is also the tormented writer, curiously named the Centaur, who is literally impaled into the stage and the Duke, the benign ruler over this dark fairy-tale kingdom. And what holds this odd assortment of walkers together? They all belong to the saddest club of all–grief.

Is it that only by sharing misfortune with someone else who has had a similar hurt that one receives the compassion needed to heal and move beyond?

This brief, intense show is chock full of local talent including John Lescault as the Duke, Leo Erickson as the kindly math teacher, Nanna Ingvarsson, Nora Achrati, Rafael Untalan, Joseph Wycoff and Edward Christian in an outrageously over the top role as the Centaur.

Transcendent themes of time and motion abound in this performance, tight as a paracord, then are lifted away on gossamer wings. Is the journey the real ending? It’s a challenge, but every few minutes one gets that ‘wow’ feeling. A few short poignant phrases, or a moving monologue that stops you in your tracks or simply puts a lump in your throat.

Director Derek Goldman is to be commended. Taking on a world premiere is white knuckle stuff. His work was inventive and no holds barred. Fine, effective work by Colin K. Bills (lighting) and Misha Kachman (Scenic Designer) and also a nod to Mark and Emma Jaster (Movement Directors) for creating a paced nuance to all movement onstage.

Also kudos to Ivania Stack. Her costume design was full of browns and tans that blended into the show’s dream state. And the evocative use of full costume suits near the end of the show, reminiscent of a body collective, was a stunning surprise.

At the end, the Man realizes: