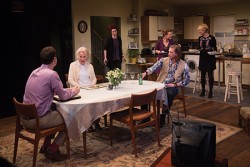 Moment is much more than another biblical tall tale of quick forgiveness. Irish playwright Deirdre Kinahan traps a dysfunctional family into one room to interact passive aggressively employing a variety of finely honed emotionally exploitative techniques until the progressively, aggressively antagonistic atmosphere erupts like a simmering volcano. Kinahan is a master game maker. Watching her work up on stage is akin to putting together a puzzle alongside the puzzle pieces themselves.

Moment revolves around a family in recovery from a tragedy perpetrated by prodigal son Nial (Peter Albrink) as a child. As the play unfurls and revelations occur, it becomes clear the extent to which Nial’s tragedy has rippled through his family.

…indicative of having access to a window into a stranger’s family home.

Convincingly frail and always a little bewildered, Dearbhla Molloy is Teresa “T” Lynch, matriarch of the Lynch family. Drifting through life in a fog of illness and depression, Teresa’s love for her daughters Ciara Black (Caroline Bootle Pendercast) and Niamh (Emily Landham) is expressed through a heady mixture of emotional blackmail and denial. Teresa reveals cherished family secrets seemingly as it suits her needs.

Landham’s Niamh is a seamlessly fabricated, self-loathing bundle of emotions. Juggling sort of/maybe boyfriend Fin White (Avery Clark) and her barely-there mother, Niamh is fighting her own internal demons. Vivid flashbacks alongside childhood friend Mira Cohen (Hilary Kelly) emphasize the extent to which the central tragedy of Moment is still more than real for Niamh. Cohen is captivatingly energetic. Whatever shred of composure Niamh maintains daily is further torn to shreds the moment she discovers her prodigal brother Nial is returning home with mystery girlfriend Ruth Pigeon (Hannah Yelland) after almost a decade of radio silence.

Niamh’s sister Ciara (Pendergast) is faultlessly obliging, outwardly well-adjusted and always on hand to absorb familial trauma. Pendergast keeps her character bright but alludes to the cracks beginning to show; a little tired, just a little sad. Ciara’s husband Dave Blake (Ciaran Byrne) is his wife’s staunch gatekeeper. Byrne’s jovial and British footie-fan mannerisms are on-point and charming. As his wife’s family falls apart he is unfailingly supportive and empathetic, a source of much-needed comedic relief.

Kinahan draws her inspiration “…from off the street, from the top seat of a bus, or from a fragment of newspaper.” Stylistically reminiscent of Studio Theatre’s recent repertoire, Kinahan’s characters are deeply relatable and understandably flawed. Ultimately, the coziness and intimacy of the stage and theatre was indicative of having access to a window into a stranger’s family home.

Studio Theatre has a long history of producing play by Irish playwrights and Kinahan has the distinction of being the first Irish woman playwright produced at Studio Theatre; a well-timed reminder that plays written by women and performed in DC are not produced in the vacuum of the Women’s Voices Theatre Festival.

Moment at Studio Theatre still has some way to go before the proverbial kinks are ironed out. Questionable accents abounded and as the play progressed some accents morphed or disappeared entirely. Throughout the entirety of the performance there was a lack of consistency in the pronunciation of the name Niamh, which left me baffled. This lack of consistency may seem trivial but these kinks have the power to distract us from the magic onstage.