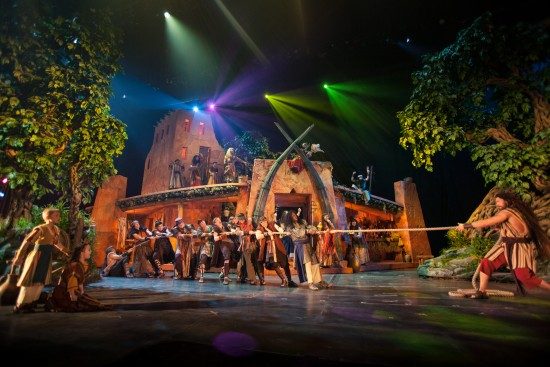 The cast of Samson. Photo courtesy of Sight and Sound Theatre.

It’s hard to believe but 2016 marks the 40th anniversary of Sight and Sound Theatres biblical spectaculars. It’s theatre done on a grand scale without ever forgetting about the true messages of the stories that the company presents. To celebrate this milestone, their latest premiere production of Samson pushes the limits of technical advancement to tell the story of the Bible’s superhero.

For those that need a quick refresher, Samson (Michael Niederer) is the son of Manoah (Tom Sharpes) and Zeleponi (Tricia Bridgeman). He has come to have an incredible amount of strength by taking several vows to God. This includes not cutting his hair, not being allowed to eat grapes or be around dead people. There are many that are jealous of Samson’s strength such as the head of the Philistines, King Gaza (Jacob Cummings). This results in several confrontations with Samson always coming out on top. When the seductive Delilah (Allie McCaw) comes into Samson’s life things begin to go downhill even furthur. She is promised an inordinate amount of money by Gaza if she can figure out the secret to Samson’s strength. You probably know how it goes from here but let’s just say the end result brings the house down…literally.

…an experience of epic proportions that all can enjoy together.

Director/writer Jeff Bender has taken what are only two chapters of the Bible and expanded it into an eye-popping musical extravaganza. The set encompasses the entire span of Sight and Sound’s wrap around stage and is made out of six miles of aluminum. With 54 actors and 34 animals in the production, Bender’s vision took three and a half years to be fully realized. The end result is what you might and might not come to expect from a Sight and Sound show. The first half of the show relies heavily on projection to create certain scenic elements. Does it add anything to the storytelling? For some it might but I was more engaged in act two when all the glitz went away and the show concentrated on good old fashioned storytelling. Having said that, the last ten minutes of the show is worth the price of admission alone in the way they depict the destroying of the temple.

Music is always a part of a Sight and Sound production and one of the things I always look forward to in one of their shows. With Samson, many hands took part in the show’s scoring. The nine person team of John Doryk, Sarafina Bailey, Paul D. Mills, Danny Hamilton, Daniel Semsen, Jeff Bender, Darren Ingram, Sarah Mentzer and Tim Paul have created a score that features big production numbers such as “We’ve Been Set Apart” to large power ballads like Delilah’s “Freedom” and everything in between. All of the music is orchestrated expertly by David Shipps, but oddly enough the continuity of the score is missing. We have numbers that sound really huge and then certain things sound like they are no more than scratch rhythm tracks. With nine composers working on the production, I guess total continuity can’t be totally achieved. What does land in perfect harmony is the big lush sound of the ensemble as they sing David Wise and Erik Foster’s stirring vocal arrangements.

Performance wise everyone is at the top of their game, which is something that I never have to worry about when I attend a Sight and Sound show.

As Samson, Michael Niederer’s performance is as strong as Samson’s strength in both acting and singing. You really can feel and root for Samson in his portrayal. His “Someone Like Me” rips your heart out.

Allie McCaw’s Delilah brings out the desperation of the character in spades. Here is a woman that knows she is doing something wrong but the chance to become free wins out. McCaw’s vocal “Freedom” stopped the show and it totally deserved the reaction.

Tom Sharpes as Manoah is our narrator for the journey and does a fine job of moving the story along.

Wally Calderon, serves as Assistant Director and choreographer for the show. While there isn’t a lot of dance, what there is, is quite memorable. “Samson’s Here” is a prime example of this.

At the core of every Sight and Sound Production is the message of the story. The message of Samson is that good can befall you even in the worst of circumstances and this version gets that message across in the best of all possible ways. It never panders or preaches. It just puts it out there for all to see in its grand form.

With their 27th world premiere, Bender and company have again merged the bible and theatre together for an experience of epic proportions that all can enjoy together.

Samson runs through December 31st, 2016 at Sight and Sound Theatre, which is located at 300 Hartman Bridge Road in Ronks, PA 17572. For tickets, click here.