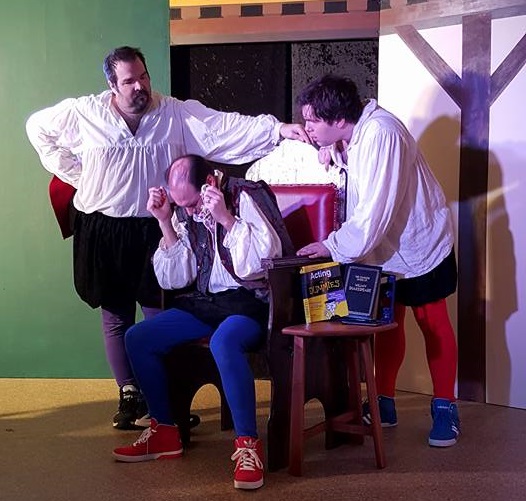 from ‘The Complete Works of William Shakespeare (Abridged)’ at NDCT. Photo by Regan Cashman.

I am not a Shakespeare fan. I know. Gasp! How less than honorable of anyone who dares to claim himself or herself a true lover of theatre. So, when approached to review The Complete Works of William Shakespeare (abridged), which claims to perform all 37 plays by none other than William Shakespeare, I almost cringed until I found out that it was supposed to be a madcap romp through every play, the comedies, the tragedies, and even the histories, making them all essentially a comedy. I am all for laughing about Shakespeare. So, off to the front row I sat, thinking that anyone who says they can make me laugh while watching Shakespeare is a brave soul. But, Keith Mervine, Justin McCright and Ethan Croll made me forget any doubt I may have carried walking into the theatre.

…most of the charm of this show is its complete irreverence and willingness to push to the absolute extreme every major Shakespeare character.

The show opens with our three male actors, who first portray themselves before taking on every famous character, including the females for the next two hours. Their transformations and realizations of just how preposterous they are made for laugh out loud performances.

We get eased into the fact that Shakespeare revolutionized the acceptance of the era where men could wear pink tights with pride. Amen! The costume shenanigans continue as Romeo (Mervine) tries to assist Juliet (Croll) with “shis” escaping bosom, where he is shut down with the old, “Second base is for second dates, sweetie!” It appears that Shakespeare was a bit spicier than I remember. Speaking of escaping bosom, our actors made the most of their costumes and props. How many shows can a guy use hollowed coconut cups to simulate his horse clopping and then stuff them back into his shirt to accentuate his amble bosom to a roaring audience? Then, there is the famous balcony scene, where one unlucky actor gets to portray…the balcony! There is chewing up the scenery. Then, there is becoming the scenery!

Next we moved on to what was touted as “Shakespeare’s Quentin Tarantino phase” as Titus Andronicus is presented as a cooking show with a very effeminate one handed cook (McCright).

One of the absolute showstoppers was in the Othello skit, based on Shakespeare’s tale of a spaghetti loving homeboy. He was, after all, an African Italian. The props and guilty pleasure rap song was hilarious.

So, what makes Shakespeare so timeless? After all, he was simply a formula writer who ripped off a few play ideas and rewrote them out into multiple plays? In fact, in about two minutes our actors were able to cover sixteen shows summed up as “Four Weddings and a Transvestite.” It doesn’t seem like Shakespeare was all that when you put it into perspective. Yet, every true veteran of the theatre knows the curse of…wait, maybe I shouldn’t say it…Let’s just say, “the Scottish play.” Oh, ok! Macbeth! There! I said it! (I guess I can say it since they actually performed it, right?) Macbeth is yet another “classic tragedy” that became a comedy before our eyes.

The first act ends as an actor gets cold feet and abruptly escapes the theatre before participating in the bard’s epic, Hamlet, which leads to another actor chasing after him, leaving a sole actor to entertain the audience pondering, “What kind of all inclusive Shakespeare show would this be without Hamlet?!”

But, alas, Hamlet does indeed get performed…with a little audience participation, which adds to the hilarity, and possibly some first hand experience to write about should one be, let’s say, a theatre reviewer for the Maryland Theatre Guide. But, I cannot be bought so easily! However, sold I was on this insane show. In fact, most of the charm of this show is its complete irreverence and willingness to push to the absolute extreme every major Shakespeare character. Even if you don’t know the characters, the audience can follow along and appreciate the absurdity of every classic tale due to the comic timing and versatility of the three actors.

The set is minimal, which works well for a community theatre with a small performance space like the Long Beach Community Center. The costumes, by Laurie Foster, were fun and transformed the characters in the most ridiculous ways. Kudos to director, Candida Olney in getting the timing precisely right with her actors.

The Complete Works of William Shakespeare was written by Adam Long, Daniel Singer and Jess Winfield of the Reduced Shakespeare Company.

Running Time: 2 hours and 20 minutes with one intermission.