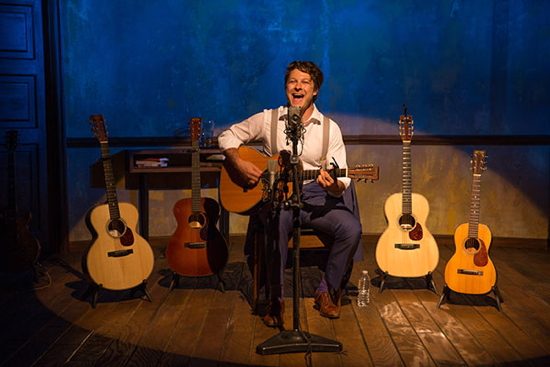 Benjamin Scheuer in The Lion at Arena Stage at the Mead Center for American Theater (Photo: Matthew Murphy).

What makes a lion a lion? Identity is the question of the hour in The Lion, a roaring one-man musical show written, sung and strummed by Benjamin Scheuer and directed by Sean Daniels, which made its bounding Washington debut at Arena Stage last week.  A nimble and explosive guitarist, Scheuer fearlessly sings the story of his life—a story marked by a kind of confounding unpredictability that could only come from the muddled reality of actual human experience. By the end, lovers of music and story alike will bask in Scheuer’s golden glow. If you come for one, there’s no doubt you’ll stay for the other.

The Lion is the raw, tumultuous account of Scheuer’s life, bluntly and intimately delivered through music—his most native of languages. Performed entirely by Scheuer with the help of seven guitars (six acoustic, one electric), and set mostly in his native New York City, the performance rides the peaks and troughs of his emergence from a timid early childhood into a confident, resilient adulthood. It starts with a tender memory of playing folk songs alongside his father on a homemade banjo made out of a cookie-tin and rubber bands—a scene which sets up one of the show’s most salient themes—the power of music to connect us when nothing else seems to work.

…lovers of music and story alike will bask in Scheuer’s golden glow.

Scheuer generously dumps the coarse sediment of his rocky life out on the table for the audience to see, sparing no misshapen detail. With a guitar pick as his chisel, he tenaciously carves out meaning from the rough of his own jagged experiences. It’s a messy process, filled with dissatisfying relationships, unwarranted and inexplicable loss, and plenty of unresolved questions. Through it all, Scheuer maintains a surprisingly consistent cheerfulness, seemingly upheld by his faith in the restorative power of his music.

A homey set, designed by Neil Patel, recreates the lived-in look of an older New York City apartment, marked by a classic cast iron radiator, worn wooden floorboards and trim, and splotchy walls that look as if they’ve been re-painted dozens of time. The familiar surroundings compliment Scheuer’s relaxed demeanor and conversational cadence, giving the audience the feeling that they’ve just been invited in to shoot the breeze. The stage is hemmed in by a ring of warm incandescent light bulbs suspended overhead, whose brightness fluctuates to accentuate the emotional charge of each scene. Lighting by Ben Stanton maintains a disarming atmosphere while articulating feelings and reactions that aren’t always obvious in Scheuer’s voice and facial expressions, with shifting, contrasting colors that illuminate the apartment walls throughout the show.

Appropriate costuming and styling by Jennifer Caprio bolstered Scheuer’s bold and buoyant presence. Most notable was Scheuer’s turgid, disheveled hair style, which resembled a lion’s mane, and the progressive subtle relaxation of his dress throughout the show to signal his character’s growing self-assurance. The cozy enclosure and optimized acoustics of Arena’s Kogod cradle offers the perfect home for Scheuer’s lion to emerge. Fine tuning by sound designer, Leon Rothenberg, capitalizes on the Kogod space to ensure no one in the audience misses a single word or pluck of the string.

Be forewarned—The Lion is not tame. This is a show for those who live in and know the wild, sometimes ruthless jungle that is real life. Scheuer offers few answers and little resolution, but by the end you won’t miss his confident conclusion about what it is that makes a lion a lion, and you certainly won’t forget his riveting, heartfelt performance.

Advisory: Some adult themes discussed. Not recommended for children under 12 years old.