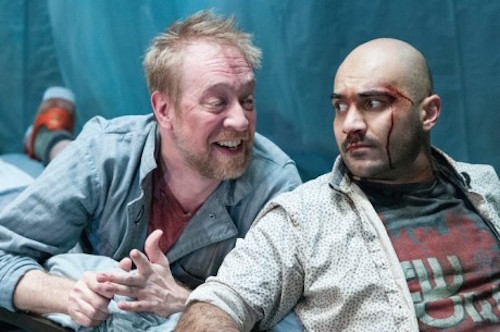 Leave it to Irish playwright Martin McDonagh to make a case for being the Brothers Grimm of the 21st century.

The playwright has carved out a niche market for himself with such grotesquely weird and dark entertainment as The Lieutenant of Inishmore, The Beauty Queen of Lenane, The Cripple of Inishmaan, which have become staples of edgy contemporary stage work.

It’s the type of show that laser-locks you in as you squirm in your seat.

McDonagh ranges far away from the barren craggy slopes of western Ireland in this psychological exploration of the inner mind in The Pillowman. Forum Theatre’s presentation is a newly imagined Pillowman (though only hard-core aficionados would have seen it) that from its new staging and use of a cell-like structure literally frames onstage the subtle horror of the unleashed, unhinged mind. The four actors thrust us into this setting; a police investigation in an unnamed totalitarian state, somewhere in Eastern Europe. Front and center is our suspect, a writer of unusual children’s stories, wondering why he and his brother are in custody.

“The first duty of a storyteller is to tell a story,” Katurian Katurian (Maboud Ebrahimzadeh) says to his brutal interrogators (talented tag team torturers Bradley Foster Smith as Ariel and Jim Jorgensen as Tupolski.) There has been a series of child murders imitating events in Katurian’s oft gruesome stories, and he and his brain-damaged brother (James Konicek, in a stunning portrayal) are under suspicion.

The setup, we slowly realize, is a pretext to exploring a full range of human concepts, teasing us, flirting with big questions about what inspires an author, or even the relationship between violence and creativity, or whether life is sometimes too horrible to continue living, in this dystopian world crafted by McDonagh. It’s the type of show that laser-locks you in as you squirm in your seat.

The denizens of this deranged drama continue in this vein, a Waiting For Godot on steroids. Smith and Jorgensen supply marvelous comic brutality, as the sardonic, bickering good cop/bad cop team. Actually more of unhinged cop/smart aleck cop team. Unhinged Smith is horrified by the events that transpired, as he prepares to offhandedly torture Katurian. Smart aleck Jorgensen is a world weary wit who nimbly traverses the children’s tales for clues, commenting on one of Katurian’s stories “I should fricking (sic) shoot you right now for an ending like that.”

Katurian’s world is a surreal exploration of the inner mind through his stories, as he and his brother deal with their present, and as we find out, their horrid past. Konicek and Ebrahimzadeh have great rapport as doomed brothers, with Konicek at times simply mesmerizing as he fully assumes the role of the off-kilter sibling.

And on and on it goes and goes. The constant challenges to our senses and our humanity and the tough choices involved are a handful for both the audience and talent. It can be draining, but does not drag as McDonough brings every subplot back to the central story, with time ticking away. Is Katurian a misunderstood victim or perpetrator? In the end all he has left is a desperate wish for his stories to be preserved. Ebrahimzadeh, seen recently in many regional productions, had an everyman feel that was believably portrayed.

The quite inventive three quarter framed stage by Scenic Designer Paige Hathaway created a scenario in which the actors stayed confined in and floated out in other ethereal sequences, letting the audience join in that particular dream—or nightmare. Director Yury Urnov, who has published translations of McDonagh’s work in Russian, infuses this performance with pace so that the ideas keep floating, unable to fall until the next one picks up. His deft combination of horror, wit and message left me breathless.

Comedies don’t get much darker than this, nor horror shows to guffaw-inducing. A pillow can have many uses. To clutch, to stifle a laugh, to…stifle a…

Running Time: 2 hours and 50 minutes with an intermission.