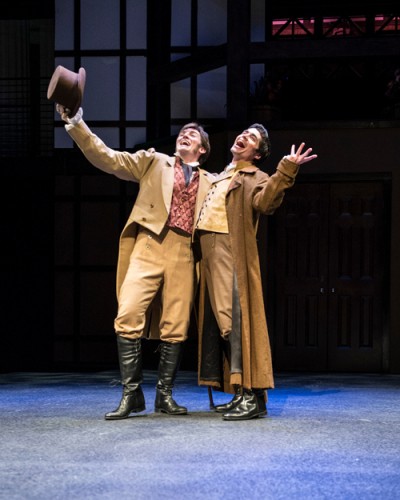 CSC has rediscovered Wild Oats, a rarely performed play by Irish-born playwright John O’Keefe and it is quite the little gem. It has all the trademark devices of mistaken identity, romantic complications, happy coincidences and resolutions found in the great comedies – and sometimes the tragedies – of Shakespeare – and then some. It was written in the late 18th century with a nautical theme and has more twists and turns than even the Bard could have imagined. To give too much away would spoil it!

…the cast and production team of Wild Oats does it justice. If you are looking for a fun night of theater, this CSC production is a winner!

The story centers on a young thespian, Jack Rover (Vince Eisenson), with an eye for the ladies and they for him. He travels the countryside, trying to make a living with a small troupe of actors and breaking hearts along the way. The troupe includes the foppish Dick Buskin who in reality is the son of the blustery, bombastic and larger-than-life, retired sea captain Sir George Thunder (the fabulous Michael B. Sullivan). His name is Henry “Harry” Thunder (an appropriately over the top Séamus Miller) who deserted his training at the naval academy in Portsmouth for his love of theater.

His father is on the hunt for deserters with his valet, John Dory (an excellent Jack Novak), when they find themselves in the country home of his niece, the kind-hearted Lady Amaranth (the sparkling Lizzi Albert), who has inherited a great estate on the condition that she live as a Quaker. Her strict steward, Ephraim (the hilarious Gregory Burgess), also a Quaker, keeps on eye on things but turns into butter when he falls for his mistress’ new maid, Jane.

Unaware that Harry has decided to return to the academy, Sir George sends John to find his son, for he has marriage in mind for Harry and his cousin Amaranth. John mistakes Jack for Harry when he calls himself “the bold Thunder.” Despite his protests, Jack decides to gives in and he plays the role of Harry. Of course, it’s love at first sight when Jack and Amaranth meet. Thus begins a series of deceptions and hilarious complications, accelerated by Harry himself when he arrives on the scene.

Vince Eisenson is the heart of this play and completely embodies the character of Jack. He is an actor’s actor, commanding the stage with matinee idol looks and overflowing with charm and charisma. He was truly born to play this role. The script contains lines from 20 plus plays and though many are obscure, there is no mistaking the sprinkling of Shakespeare, often paraphrased and misquoted by Jack.

The playwright has also endowed the character of Jack with bravery and eternal optimism despite his modest beginnings as an orphan raised in the West Indies. Jack comes to the rescue of Mr. Banks (the always reliable Dave Gamble) and his sister, Amelia (Lesley Malin) when he discovers that a greedy neighbor, Farmer Gammon (Daniel Flint) is trying to take their property and impoverish them. He wards off an attack on Sir George even as he is about to fight a misguided duel with him. But almost no one is who he or she seems and even though the happy ending is telegraphed, it is great fun going along for the ride.

Daniel Flint is perfectly despicable as Farmer Gammon. Matthew Ancarrow as his not-to bright-son, Sim, and Laura Rocklyn as Jane, his spunky daughter and lady’s maid to Amaranth, are delightful as well as Frank B. Moorman in several roles. The whole supporting cast deserves high praise.

There were just few minor issues. For accuracy, the cast used the Hampshire dialect of southern England and some actors has small issues maintaining the accent. There were also some problems with projection that will likely be overcome throughout the run.

Founding Artistic Director Ian Gallanar has done a fine job mounting this production. There is a bit of a slow start but then the production speeds along with high energy. Daniel O’Brien has again done a yeoman’s job as technical, lighting and scenic designer. Jacy Barber is another triple threat as costume/hair and wig/makeup designer. While the set is very simple with minimal props and set pieces, it is the lighting and sound design (also by director Gallanar) that allow the audience to “see” and “hear” the setting.

Gallanar also uses the clever device of the actors appearing at different parts of the stage to announce the act, scene and setting, often in a comic manner. They even reference the play itself and interact with the audience, breaking not only the fourth wall but all walls!

CSC shrewdly invited the drama club (the “Masqueraders”) from the Naval Academy for opening night. The young officers were seated on either side of the stage and it enhanced the fun to watch the actors play directly to them and their reactions.

Playwright O’Keefe has honored the comic legacy of Shakespeare and the cast and production team of Wild Oats does it justice. If you are looking for a fun night of theater, this CSC production is a winner!