1. Noises Off at Silhouette Stages.

“The Silhouette Stages is community theater at its best, illustrated by its current production of the 1982 farce, Noises Off…” – Lynne Menefee.

Synopsis: Called the funniest farce ever written, Noises Off presents a manic menagerie as a cast of itinerant actors rehearsing a flop called Nothing’s On. Doors slamming, on and offstage intrigue, and an errant herring all figure in the plot of this hilarious and classically comic play. 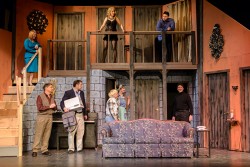 The cast of ‘Noises Off’ at Silhouette Stages. Photo by Bruce F. Press Photography.

2. The Flick at Signature Theatre.

Synopsis: Spilled soda on the floor. Leftover food wrappers stashed in the seats. Three minimum wage employees perform the humdrum labor necessary to keep one of the last 35 millimeter projectors running. Through seemingly small conversations about movie actors, broom techniques and weekend plans, the characters divulge heartbreak, hopes and a compelling story all their own. 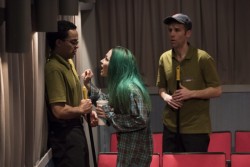 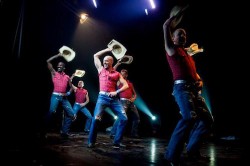 “…the cast and production team of Wild Oats does it justice. If you are looking for a fun night of theater, this CSC production is a winner!” – Lynne Menefee.

Synopsis: Wild Oats is a riotous, 18th Century romantic comedy about a traveling thespian who has mastered every role — except his own. He seizes an opportunity to impersonate a naval cadet and woo a virtuous Quaker heiress. When the AWOL student and his blustery sea captain father arrive, however, everyone’s secrets will be exposed. It’s a rare comic treat, especially delicious for Shakespeare fans: The hero has a quirky habit of quoting Shakespearean and borrowing roles to suit every situation: All the world is his stage. The joke’s on him, however.  Nearly everyone he meets is harboring secrets as well! Fast-paced and brilliantly funny, Wild Oats will keep audiences guessing and laughing right up to a surprise ending.  Rediscovered and revived in 1976 by  the Royal Shakespeare Company, this comedy by the Irish-born dramatist John O’Keeffe delights audiences. 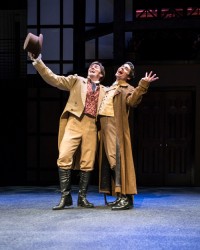 Synopsis: Internationally acclaimed director Ron Daniels joins STC to helm Othello, Shakespeare’s tale of jealousy, duplicity, and destruction. Among the exotic airs and mysterious shadows of Cyprus, newly married and promoted Moorish general Othello finds himself the pawn in the manipulative games of his right-hand man, Iago. As his imagination is poisoned, Othello turns on his new bride Desdemona and his loyal lieutenant Cassio, and rapidly spirals from hero to murderer in one of Shakespeare’s most haunting tragedies. 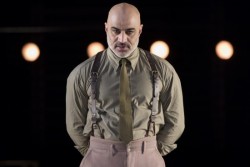