‘A Quick 5’ with Adam Immerwahr 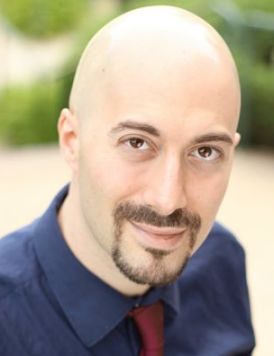 Theater J’s new Artistic Director Adam Immerwahr may be new to our area but he comes with a very impressive list of credits within the administrative and creative sides of theatre.

Before joining us here in DC, Adam was most recently the Associate Artistic Director at the prestigious McCarter Theatre Center in Princeton, NJ. His many NYC directing credits include productions at The Public, Theater Row (both for Summer Play Festival), Ensemble Studio Theatre, The Wild Project, and NYU’s Studio Tisch. Internationally, he directed the African premiere of The Convert in Zimbabwe (nominated for the National Arts Medal Award, Zimbabwe’s highest arts award). He has directed and developed work for McCarter Theatre, Luna Stage, Hangar Theatre, Bristol Riverside, Premiere Stages, Playwrights Theatre of NJ, PlayPenn, the National Constitution Center, Philadelphia Artists’ Collective, Princeton Summer Theater, Westminster Choir College, Theatre Masters, and Passage Theatre Company in Trenton, where he serves as Resident Director. On top of all of that his many awards include being the recipient of a 2008 Drama League Directing Fellowship, the 2010 NJ Theatre Alliance “Applause Award”, and the 2014 Emerging Nonprofit Leader Award presented by Fairleigh Dickinson University’s Center for Excellence and the Center for Non-Profits.

While most theatre companies have their own building, Theater J, as you probably know, is housed in the Washington DC JCC. This I imagine adds an extra layer to Adam’s job as Artistic Director because he has to deal with scheduling a season while other activities are sometimes using the same space that Theater J presents in. Because Adam is a creature of theatre and has been from a very early age, he can handle anything that is thrown at him and I look forward to seeing what Theater J has in store for all of us under Adam Immerwahr’s leadership. Their 16/17 season has just been announced and will feature Adam’s DC directorial debut with the season opener The Last Schwartz.

Please help me in welcoming Adam Immerwahr to our theatre community and please support the great work of Theater J. Before I started working for them I was a fan so I can tell you first hand you won’t be disappointed by what Adam and the staff at Theater J hold in store for you. Onward and upward Adam Immerwahr. It’s nice to have you here.

Had you been working in another part of theatre before getting into arts management?

Yes and no. I grew up in the theater; as Paula Vogel would say, I “inhaled the stage dust” at an early age. I went to a performing arts high school as an actor, but by the time I graduated I found myself more interested in directing. In college, I pursued directing but ended up doing a lot of producing, and so when I entered the professional market it became clear that I wanted to be able to pursue both. For the last decade, I’ve been working as both a producer and a director. I continue to direct both inside and outside of Theater J.

Were you familiar with Theater J before applying for the position of its Artistic Director?

Yes. I’d known about it for many years; it is well-regarded throughout the industry as the largest and most prominent Jewish Theater in our country. Of course, I also followed the slew of press that Theater J received over the last several years. 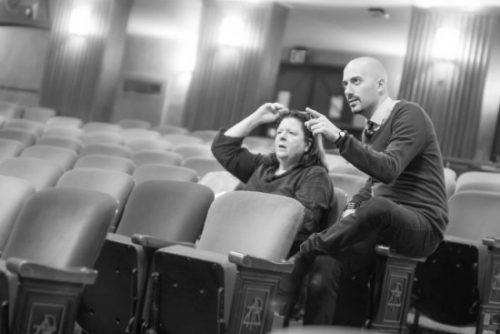 Playwright Teresa Rebeck and Director Adam Immerwahr in rehearsal for The Understudy at McCarter Theatre Center. Photo by Matt Pilsner.

You came to DC via the McCarter Theatre Company in NJ. What are some the similarities and differences between producing theatre in NJ and DC?

The two organizations are very similar. Theater is just one of the programming elements within both institutions—at McCarter that means the Theater Series shares spaces, staff, and resources with a Presented Series (classical music, world music, dance, jazz, puppetry, circus, pop and rock acts, etc) as well as a thriving Education Program. There is truly something happening every night. And that’s the same for Theater J, which shares the Edlavitch JCC of DC with a terrific Film Program, an amazing Literature Festival, a growing Music Festival, and a slew of educational programs for children and adults. Of course, McCarter isn’t associated with any specific religious or cultural group, and Theater J has a specific cultural mission.

Can you please talk a little bit about what Theatre J’s programming will include in the coming seasons and should audiences expect any radical changes in terms of show selection?
The programming is centered around three areas: “Legibly Jewish” programming, with plays and musicals that celebrate and struggle with Judaism, both from our national repertoire and our contemporary canon; “Thematically Jewish” programming, that tells stories that are resonant to Jewish experiences (such as immigration and assimilation, genocide and oppression, living a religious life in a secular world, etc.); and “Jewish Values” programming, which connects with the major values that are most important to Judaism, such as healing the world, caring for our neighbors, protecting our earth, promoting peace and reconciliation, and fighting against racial, social, and economic injustice.

What are you setting as your biggest goal for Theater J as its new Artistic Director?

To make Theater J a vital part in the lives of all of the Jewish communities of D.C.; to build Theater J’s reputation as a key voice in the theatrical ecology of our town; and to promote Jewish works into the national theatrical repertoire.