‘A Quick 5’ with John Scherer 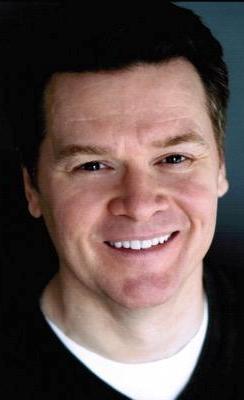 John Scherer is making his dramatic Arena Stage debut. He portrays President Lyndon Baines Johnson’s longtime assistant Walter Jenkins in the political drama All the Way. John last appeared at Arena Stage in the musicals On the Town(Helen Hayes Award nomination) and Animal Crackers at the Kennedy Center and Goodspeed at Chester. He played Bertie Wooster in Andrew Lloyd Webber’s By Jeeves, directed by Sir Alan Ayckbourn (Helen Hayes Award nomination). Broadway credits include By Jeeves, Sunset Boulevard and LoveMusik, directed by Harold Prince. He also worked with Mr. Prince on the premiere of 3HREE (Ahmanson Theatre). He received the Connecticut Critics Circle Award for his performance in George M! (Goodspeed). Other regional credits include productions at Goodman Theatre, Paper Mill Playhouse, Cleveland Play House, Repertory Theatre of St. Louis, Cincinnati Playhouse and many others. You might have also seen John on the big and small screens in Spinning Into Butter, Crossing Jordan, The Shield, Law & Order (all three series) and Titus.

I have had the pleasure of working with John Scherer at Paper Mill Playhouse on 42nd Street and You Never Know, and I have also seen him a number of times in productions over the years as an audience member. His George M. Cohan in George M!  at Goodspeed made that show considerably better than it actually is and I really enjoyed his performance in the under appreciated off Broadway musical Olympus on my Mind. Until All the Way, I had only known John as a musical comedy performer, so it’s a treat to see him in a dramatic role and a meaty one at that. While being LBJ’s trusted assistant, Walter Jenkins is trying to keep a dark secret about himself out of the press. John’s portrayal is poignant and you learn many things about his character that you might not have known going in. This is what good theatre is all about. If it educates as well as entertains then it’s a total experience. Check out John Scherer and a stellar cast in All the Way at Arena Stage. If you only know John from his song and dance performances, please check him out in this show. His performance gets my vote and I think it will get yours too.

Most of your stage credits are in the musical side of theatre. Is All the Way your first non-musical role?

I’ve been lucky to cross back and forth between plays and musicals, which isn’t easy to do because people like to pigeonhole you into one or the other. Last year I did a terrific production of Vanya and Sonia and Masha and Spike at the Cleveland Play House, Geva Theatre and The Cape Playhouse. I do more comedies than serious plays though, so All The Way is a nice change of pace.

Can you please tell us about All the Way and the characters you play in the show?

All the Way is about LBJ getting the Civil Rights Bill of 1964 passed. It’s an epic piece of theater and it deservedly won the Tony Award for Best Play a few years ago. I play Walter Jenkins, who was LBJ’s chief aide from the time he was a representative until became president. He was LBJ’s most trusted friend and advisor, other than Lady Bird. I also play Representative William Colmer from Mississippi, who speaks out against the bill in the play. 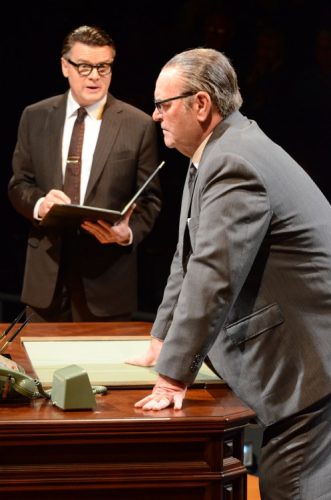 Arena Stage is one of the premier theaters in the country and does consistently great work. I’ve seen so much here over the years and I’m always impressed by the quality. I love the direction Molly Smith has taken the company and the entire staff here is first rate. And I still can’t get over the new facility! I love DC for so many reasons. I love the monuments and memorials (the Jefferson Memorial is my favorite). I love the cultural scene here. I did the Alan Ayckbourn/Andrew Lloyd Webber musical By Jeeves at the Kennedy Center years ago (before we took it to Broadway) and it was one of the greatest summers of my life.

I saw you in an off-Broadway show a loooong time ago called Olympus on My Mind. What are your memories of working on that production and why do you think it didn’t run as long as it should have?

Olympus on My Mind was a blast!  It was hilarious, but the audience reaction was extremely varied from night to night, more than any other show I’ve done. I have no idea why—some nights they’d scream with laughter and other nights we would get a few chuckles here and there. I  remember the costume designer wanted me to get a perm because he thought it would make me look more like a Greek god (I was playing Mercury). I got the perm. I didn’t look like a Greek god—I looked like Annie.  It ran for about a year Off-Broadway, which is respectable, but I am surprised it hasn’t had a bigger life regionally.

What is next for you after All the Way?

After All the Way I’m going down to the Casa Mañana in Fort Worth to do Spamalot.  My good friend Hunter Foster is directing it, I have other friends in it and I’ve done it before, so I think it’ll be fun. Then I have several summer stock gigs lined up. They’re fast and furious, but it keeps it interesting.