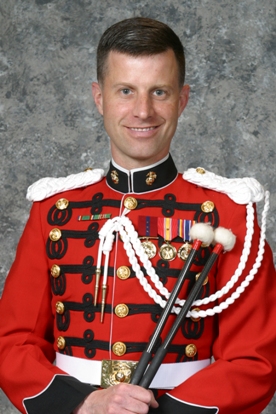 Master Sergeant David Murray holds a very prestigious position that I’m sure many musicians would like to have, but few can actually obtain. MSgt Murray has been a member of the “The President’s Own” United States Marine Band percussion section since June of 1992.  The band plays White House state dinners and military funerals, but it also has an extensive music in the schools program and a variety of events for public audiences.   I was fortunate enough to see the ensemble perform a few weeks ago at Strathmore.

MSgt Murray began his musical training at age 12. After graduating in 1986 from Caddo Parish Magnet High School in Shreveport, he earned a bachelor’s degree in music from Rice University in Houston in 1991, where he studied with Richard Brown. He earned a master’s degree in music from the Eastman School of Music in Rochester, N.Y. in 1996, where he studied with former Marine Band percussionist John Beck.

Prior to joining “The President’s Own,” MSgt Murray toured with the American-Soviet Youth Orchestra, conducted by Leonard Slatkin, and studied at the Grand Teton Festival in Jackson Hole, Wyo., the Los Angeles Philharmonic Institute, and at the Jazz in July Summer Music Program at the University of Massachusetts, in Amherst, Mass., with Max Roach.

In addition to his musical duties, he serves as an Anti Terrorism-Force Protection Officer coordinating security for Marine Band concert tours. That part of MSgt Murray’s job is about as far away from music as you can get, but it is a very important one to be sure.

When MSgt Murray is off-duty, he can be found playing at some of the area’s most prestigious theatres. This is how we first met. I was in need of a percussionist  and MSgt Murray came highly recommended. Mind you, I had no idea he was part of  “The President’s Own” United States Marine Band when I hired him.  MSgt Murray is brilliant at playing all styles of music, yet is totally humble about his talents. I’ve heard MSgt Murray play everything ranging from Rodgers and Hammerstein to a rock-based type of score and, trust me, his versatility shines through no matter the style of music is that he is playing.

The band has an extensive free concert schedule (see below) and with the summer coming up and people looking to get outdoors with the family, I urge you to check out MSgt David Murray with “The President’s Own” United States Marine Band. The music is great, and there is something for everybody in the schedule. Thank you MSgt David Murray for all you do for your country and thank you for the beautiful music.

Before joining the U.S. Marine Band, had you been playing professionally elsewhere?

When I joined the U.S. Marine Band I was a 24-year-old graduate student at the Eastman School of Music in Rochester, N.Y. At that point I had nine years of freelance experience in diverse situations and venues. I had played a lot of drum-set gigs in the bars, juke-joints, and jazz clubs of Louisiana, Texas and Arkansas, but I had also played in the pit with the Houston Grand Opera, and with orchestras in major venues like the Hollywood Bowl in Los Angeles, the Great Hall of the Moscow Conservatory, and the Royal Concertgebouw in Amsterdam.

Can you please talk about the U.S. Marine Band’s audition process and was there a particular reason you wanted to join this particular ensemble?

An audition with the U.S. Marine Band is extremely competitive and rigorous, but fair. To ensure equal opportunity for all of the candidates, auditionees perform behind a screen, so the committee is focused solely on their playing. Candidates will play prepared excerpts, their sight-reading skills are tested, and in the final round they will also play in a small group setting with current Marine Band members. I was attracted to a career with “The President’s Own” because I get to play with some of the greatest musicians in the world, in a really wide range of musical styles and ensembles, and I have a front row seat for historical events. 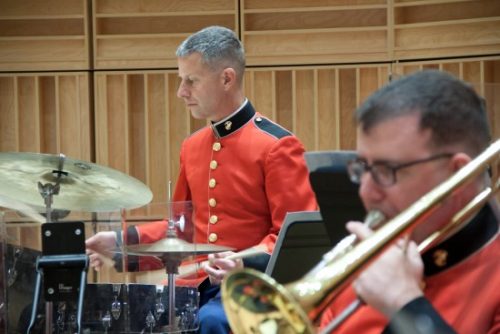 Can you please take us through a typical year for a musician in the U.S. Marine Band and between state dinners, concerts and other functions, how many events would you say you play in a year?

Oh man, this answer could take days to explain. The organization as a whole plays more than 500 events per year. Over 200 of those events occur at the White House, in the form of State Dinners, arrivals for Heads of State, ceremonies of national significance, holiday receptions, the Easter Egg Roll, and a July 4th picnic for veterans and their families. We have played for every Presidential Inauguration since Thomas Jefferson’s in 1801. In addition to the State functions at the White House, our band, chamber orchestra, and small ensembles give concerts for the public year round, on almost a weekly basis. Summer concerts are twice a week on the National Mall. The “Friday Evening Parade” at historic Marine Barracks Washington takes place from May through August. There is an annual national concert tour of U.S.A. in the fall. We visit one of five geographic regions per year. This year, it will be to the southeast. We do educational clinics in schools, both in the Washington, D.C. metropolitan area and across the country. We also play Honor Flight ceremonies at the World War II Memorial. It is our great privilege to render musical honors for fallen Marines at Arlington National Cemetery year round. The list goes on. Every week is different. I could be on a band concert schedule one week and a ceremonial schedule the following. I could be playing jazz at the White House, or a mix of chamber music, educational outreach and ceremonies all in the same week! They keep it interesting and busy!!

Of all the places the U.S. Marine Band has taken you, what are some of your favorites?

During our annual concert tours, it has been my privilege to visit all of the “Lower 48” states. It’s really been amazing to see how diverse the geography of our great country can be. Highlights include the spectacular fall colors of upper New England, the rugged beauty of the Rocky Mountains, and the turquoise waters of southern Florida. Every state has something unique to see really. A favorite tour pastime is seeking out local “mom and pop” restaurants, that offer a unique regional flair. I was also lucky enough to travel to Okinawa with a small ensemble from the Marine Band. That is a really beautiful place! And I’ll never forget visiting the National Aquarium there. They have a whale shark tank!!! I don’t think I can adequately describe the feeling of awe while standing next to a wall of glass three stories tall and four stories wide while a whale shark glides by. Unbelievable.

For you, what is the most satisfying part of being a member of the U.S. Marine Band?

This is the easy question. The members of this organization are incredible human beings. Generous, caring, compassionate, loyal, and totally dedicated to the art of music. To get to make music with them on a daily basis, at such a high level, is a privilege that I do not take for granted, and one that I will cherish every day that I am blessed to live. I encourage everyone to come see our concerts and experience this excellence in person! All of our concerts are free. Click here for a full listing of our upcoming concerts.