Theatre Reveiw: ‘Nice Work If You Can Get It’ at Arlington Players 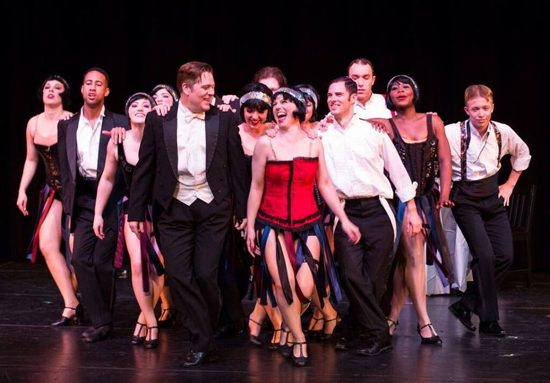 Cast of ‘Nice Work if You Can Get It.’ Photo by Peter Hill.

If you’re a Jukebox Musical junkie, you know the scenario: take a beloved artist, scan through the back catalogue for a cluster of solid hits, then cook up a paper-thin plot line to justify crowding them all onstage cheek by jowl. You know going in that it’s going to be your typical Boy-Meets-Girl, Boy-Loses-Girl, Boy-Sings-Song-and-Gets-Girl-Back scenario. But does the plot really need to hold together? Who cares? Everyone’s coming to hear their favorite songs anyway, and as long as they’re delivered with a modicum of originality and spunk you’ve got a hit on your hands.

Unless of course you’re a Tony-winning writer like Joe DiPietro, in which case you need to show some seriously writerly chops. His book for the George & Ira Gershwin pastiche Nice Work if You Can Get It, set as it is in the Prohibition era, has more than its share of groaners and ironic twists—not to mention a few astute one-liners about corrupt politicians. This makes the current Arlington Players’ production of Nice Work a perfect accompaniment for our truly accursed election season (face it, folks; the GOP and the Dems both could use some re-writes …).

DiPietro’s chief virtue is his taste for the knowing nod and wink to an audience looking in on the Roaring 20s from 100 years’ distance. Like Downton Abbey show-runner Julian Fellowes (that’s Lord Julian to you), he sticks close enough to period niceties so that he can get away with a good joke or two at the expense of our less-than-distinguished ancestors. He also—thankfully—doesn’t approach the Gershwin songbook with too much reverence, and succeeds in taking sentimental favorites (“Someone to Watch Over Me” especially) around the bend.

Being a critic, and this being a review, I’m supposed to summarize the plot right around now; but hey, you’re really going for the fabulous Charleston-era choreography (courtesy Director John K. Monnett) and the show-stopping renditions of your favorite Gershwin tunes. So I’ll cut to the chase: You’ve got a playboy, Jimmy Winter (the irrepressible Christopher Smith) having a typical debauch on the eve of his umpteenth wedding (I can’t remember how many, neither can he). Quite naturally he encounters bootlegger extraordinaire Billie Bendix (the charming Maureen R. Goldman) and the clock starts ticking on the final curtain when they take their bows as true partners-in-crime. Meanwhile Eileen, his bride-to-be—the finely-voiced Kate Collins Brown–is the ultimate untouchable, a maven of Modern Dance who can’t bear to be touched until immaculately, eternally bathed. (And even then …)

Obstacles? Yeah, you’ve got the cops – the deadpan Mike Usowski as Chief Berry—and of course Jimmy’s ever-disappointed mother Millicent (the utterly dignified and astute Judy Lewis), whose arrival just in the nick of time is destined to wrap things up. Then you’ve got those insufferable champions of Temperance, led by Duchess Estonia Dulworth and her brother Senator Max Evergreen. This brother-and-sister act work the joint, let me tell you, and when James T. Pearson isn’t playing up the priggish Republican stereotype as Evergreen, Melanie Jennings-Bales stops the show with some terrific numbers as the Duchess (“By Strauss,” and “Looking for a Boy”—let’s just say her tippling id is on gllorious display here…).

Since Jimmy seems to have driven away his entire household staff, bootlegger Billie and her gang (the hilarious Jack Stein as Cookie McGee and the well-timed Sterling Beard as “Duke” Mahoney) soon take over his Long Island home and, through a series of mishaps, are forced to pretend they are his butlers, maids, cooks. You get the idea. DiPietro has a good comic ear, and even though on a good day you can see his punchlines coming all the way from Chicago, it’s still highly entertaining.

David M. Moretti gives us a nice, functional setting that shifts with relative ease from New York’s speak-easy scene to one of those Gatsby-era luxury villas in Long Island (he keeps the Run Crew pretty busy, by the way). Grant Kevin Lane’s costumes are a suitable match, and he’s clearly done overtime given the size of the cast here—the bath scene alone is an amusing eyeful. But one of the greatest pleasures is to hear the musical arrangements for the show, performed under the baton of Steve Przbylski, which weaves George Gershwin’s orchestral work with his popular songs. There’s some nice solo clarinet work thrown in for good measure.

The Arlington Players have been a dedicated community organization for at least as long as I’ve been around (truth in advertising: I was a high-school chorus member back in the day). And given their track record—they gave birth to Signature Theatre, after all—one can hope to see more solid musical efforts for years to come.

Running Time: 2 ½ hours, with one intermission.