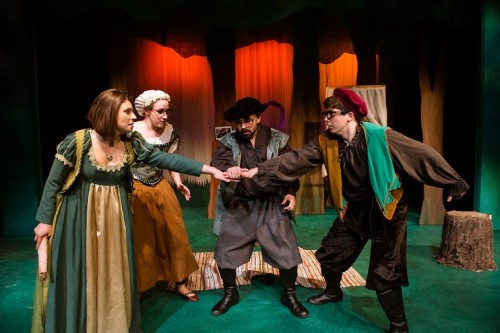 Reston/Herndon’s NextStop Theatre has put together a fun fable–Snow White–that doesn’t rely on the old standard storyline and give us an offering surprisingly stimulating to young people’s minds.

Surrounded by a phalanx of female 5-year-olds (and a smattering of boys who were dragged along also but similarly mesmerized) the children were transfixed from the opening moment, fully zoned into the gonzo goings on in front of them.

When Snow White learns Kung Fu, anything is possible.

What are we in for? We have a King and Queen, a plucky Snow White, a Huntsman with a conscience, hardworking dwarfs, and a troubled Troubadour that tells the story in song with his little lyre–and a touch of Kung Fu! What better way to spend a weekend afternoon? And it is smart enough in many ways to keep adults interested. As our Minstrel entertains us with fun lyrics, he does add in a rhyme for “procreate” and adds an aside exiting stage left that “now I have to pee.”  Creators Kyle Encinas and Alyssa Wilden have crafted a smart, modern show that is a bit PC around the edges but carries a great message.

Joshua Redford is our Minstrel, extremely comfortable with 10 minutes of narrated song. His bright eyes lit up the stage.  Emily Marsh as Snow White was charmingly likeable and played moments well as the non-heroine who wouldn’t be caught up in the traditional narrative and sought to have everyone else realize their potential. Amber A. Gibson as the Queen with a secret love of chemistry, and Mahlon Raoufi and Steven Soto in various roles showed great dexterity, especially in the ‘fight’ scenes. When Snow White learns Kung Fu, anything is possible.

Director Kristen Pilgrim has crafted a gem. This modernized version of the tale holds up well, and the realistic action sequences kept the audience enthralled.

My seatmate, 8-year-old Heidi, was especially taken by the show. She knew about Snow White, but was surprised by the story. And she added: “My favorite part was the science.” Score one for theatre as education!

So—as our usual MTG audience doesn’t include 6-year-olds, parents listen up or pass this to your friend who has little ones. Please go see Snow!