Theatre Review: ‘All the Way’ at Arena Stage 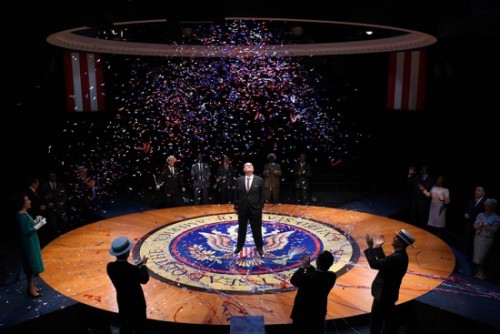 Jack Willis as President Lyndon Baines Johnson and the cast of All the Way at Arena Stage at the Mead Center for American Theater, April 1-May 8, 2016. Photo by Stan Barouh.

In an election season battered by super-charged personalities, we’re reminded that public officials take widely varied approaches to winning elections and getting things done. On one end we find the level-headed leader that voters expect— the leader that relies on a mix of personal charm, compromise, and civil debate. On the other is the leader who voters are enthralled, or even terrified by—the leader that would rather push and push and push until they get what they want—or until they run into a wall of opposition in the attempt. Lyndon B. Johnson, as portrayed by Jack Willis in Arena Stage’s All The Way, was a master of both—a leader who projected outward poise and sought compromise, but who also knew how and when to push—sometimes hard—to advance necessary, uncomfortable change.

…see this production for the exhilarating story it tells, the painful history it imparts, and the controversial personality it gloriously revives.

All the Way is an electric, three hour historical drama that hovers over the towering personality of President Lyndon B. Johnson (LBJ) during his inherited last year of John F. Kennedy’s term, from Kennedy’s assassination in November 1963, through his own election in November 1964. The play showcases LBJ’s resolute role in winning the political tug-of-war that was the Civil Rights Act of 1964, and features the team of fearless African American leaders, led by Marin Luther King Jr., who pushed him to make it happen. Written by Robert Schenkkan and directed by Kyle Donnelly, this production borrows its name from Johnson’s 1964 campaign slogan, “All the way with LBJ.” It was first commissioned by the Oregon Shakespeare Festival, before premiering on Broadway in 2014, marking the 50th anniversary of the passage of the Civil Rights Act of 1964.

In its Washington debut, All the Way may meet its most scrutinizing audience yet—an audience full of people who had a front row seat to the actual LBJ presidency. Many knew him personally and could tell you story after story. Many more know what it is to work in his world, or the world of the civil rights advocates who challenged him. If the play’s opening night reception is any indication, it’s safe to say that All the Way nails the essential LBJ on the head.

Upon entering Arena’s indoor amphitheatre-like space, Fichlander stage, the audience won’t be able to take their eyes off the massive, bold, circular seal of the president of the United States, the epicenter of the stage, and of the events that unravel on it. The seal’s inner circle and outer rim rotate at select moments, showcasing the dizzying merry-go-round of characters that occupied LBJ’s orbit. The exposed, circular stage, artfully manipulated by set designer, Kate Edmunds, leaves no curtains for actors to hide behind and no defined upstage or downstage. Carefully-chosen large furniture pieces are smoothly whisked onto and off of the stage to recast the space for key scenes—a resolute desk and chair for the oval office; a bed, nightstand, and bench for Martin Luther King Jr.’s hotel room and meeting place for civil rights leaders; a shoe shine stool where reactionary Southern legislators informally gathered to plot.

The set clearly framed each scene, but it was the nimble, dynamic cast, assembled by Amelia Powell and Geoff Josselson, that infused it with emotion and personality. Most actors took on multiple, widely varying roles, enabling the appearance of major Johnson-era figures that might have been left out otherwise. Jack Willis brazenly led the way with an unquestionable command of the essential LBJ. The infamous “Johnson Treatment” has been described as crude, domineering, and abrasive—all qualities which Willis’s LBJ exuded. Oh, and he was hilarious too. Meanwhile, Bowman Wright offered a more complex, vulnerable Martin Luther King Jr. than the titan of history books—a refreshing portrayal of an all but deified figure in modern American culture.

Susan Rome captured the flighty and endearing Lady Bird Johnson, while Shannon Dorsey gracefully alternated between the collected Coretta Scott King and the intrepid Fannie Lou Hamer. The indisputable cast was refined and polished by dialect coach, Mary Coy, costume designer, Nan Cibula-Jenkins, and Wig Designer, Anne Nesmith. Projection designer, Gregory Towle appropriately enlists a line of suspended black and white tube-style televisions to remind the audience of how most Americans witnessed period events. Stage management by Kurt Hall and Marne Anderson, and lighting and music by Nancy Shertler and David Van Tieghem kept one scene rapidly blending into the next. Don’t be scared off by the three hour runtime. It races by.

All the Way revives the perennial Machiavellian question: is it really better to be feared than loved? LBJ’s response might have been “Why not both?” If not for the philosophical exercise, see this production for the exhilarating story it tells, the painful history it imparts, and the controversial personality it gloriously revives.