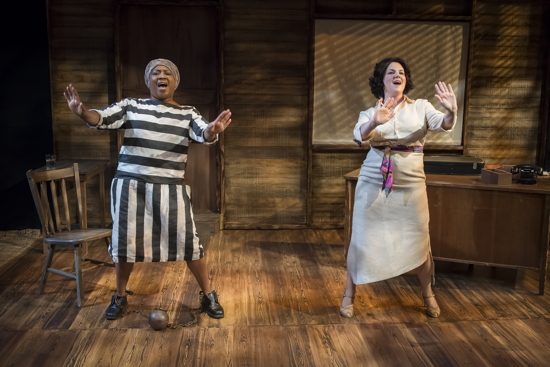 For years there has been a vogue for documentary plays and films—typically involving familiar historical figures in their formative years, or retelling a famous historic event. Adding fictional elements has always been controversial, however, and has led to two distinct results: on the one hand you have those who write as they please and produce spectacular entertainment that has little to do with the actual history. These hit shows/films raise howls of protest (and more than a few lawsuits). On the other hand you have writers who effectively work with straight-jackets on and who to produce reverent, accurate pieces that—while fulfilling in an academic sense—often leave you unmoved and uninformed.

This raises the question: can you be true to the events you describe, but still inject that magical “what if?” question that casts a spell over your audience and reveals the past in new and vivid ways?

Black Pearl Sings! Is a memorable evening, in an intimate space…

Enter Frank Higgins, a Kansas City playwright who could have taken the well-trod path of a documentary play about folklorist Alan Lomax and his friendship with the famous recording artist Huddie Ledbetter (Leadbelly). Lomax discovered Leadbelly in a southern prison, and helped to gain the man’s freedom. Leadbelly went on to a productive career as a singer-songwriter, and Lomax’s work has become a vital part of the American songbook. A classic American success story, right?

But given the numerous women who worked in the field alongside Lomax, who gained little or no recognition in their day, Higgins realized in a flash of inspiration that it would be more effective to create two strong female protagonists from the same era, the 1930’s, and explore what these women might have had to endure as both struggled for recognition and careers that their male counterparts (i.e., Lomax and Leadbelly) took for granted.

The result of Higgin’s inspiration, Black Pearl Sings!, is a beautiful, intimate evening that reminds us of the intense struggles faced by women, white and black, in the depths of the Depression. Set in the early 1930’s, we begin at a South Texas prison where Suzanna (the gritty Teresa Castracane) is auditioning women prisoners for a possible “folklore” recording session. Wary of being exploited herself – one man now has an Ivy League career based on her recordings – Suzanna encounters Alberta, “Pearl,” and demands that she sing her something new, to earn the right to be recorded for posterity.

Higgins, from the very beginning, reminds us of the racial dynamic involved in field recordings in those days, and the potential for white re-exploitation of blacks (who had already suffered enough, thanks very much). Pearl and Suzanna eye each other warily, hesitant to reveal too much and leave themselves vulnerable. But once trust is established, a relationship begins and their journey together is one of the most compelling you’re likely to see on this or any other stage.

Roz White’s performance as Pearl is revelatory; it helps that she herself has roots in the Gullah culture portrayed in the play. Her renditions of now-familiar songs will make you forget they were ever sung before, and Castracane’s Suzanna reveals her share of musical chops—with a brief snatch of the Gaelic version of “Barbara Allen” as a special highlight. And White’s rendition of a traditional Gullah dirge (whose origins, it turns out, lie in Sierra Leone) mark a fitting conclusion to Pearl’s journey.

Director Sandra L. Holloway has created a space where two fine actresses can create a solid partnership on stage, and Holloway’s instincts are spot-on in every instance. Particularly memorable is Pearl’s first concert in New York; Suzanna, technically the Mistress of Ceremonies, has to stand by bravely as Pearl literally steals the show. The discreet tension, the pasted-on smile while audience members are encouraged to sing along with Pearl, is priceless.

Carl Gudenius and Shuxing Fan have created appropriately spare, symbolic spaces for Pearl and Suzanna, from the simple wood planking of an office in a Texas prison to a finely furnished New York apartment, complete with an “authentic” African mask for decoration. Janine Sunday has created the right touches with period costumes for the two women here, and Alexander Keen makes good use of the lighting possibilities with this two-hander.

Given Higgins’ deft touch with the two characters here, it might seem petty to point up a small flaw; but while we learn, discreetly and vividly, why Pearl is in prison we never really learn why Suzanna is estranged from her family. There are hints of an independent streak, but even in the 1930’s this wouldn’t explain why parents and child were not on speaking terms. Higgins is perfectly capable of creating just the right hint or nuance to explain this further, and since he has graciously added new details to the play I would like him to consider one here.

Black Pearl Sings! Is a memorable evening, in an intimate space, and not only do you get to see some great actors interpret a finely written script you get to join in the music yourself; treat yourself to an evening in Old Town, you won’t regret it.

A reminder: finding Metro Stage can be tricky – if you’re coming down the GW Parkway from National Airport you have to wait until Madison Street to turn left, then another left onto North Royal—the theatre is at the end of Royal St. behind the Bastille restaurant.