Theatre Review: ‘Cat on a Hot Tin Roof’ at Round House Theatre 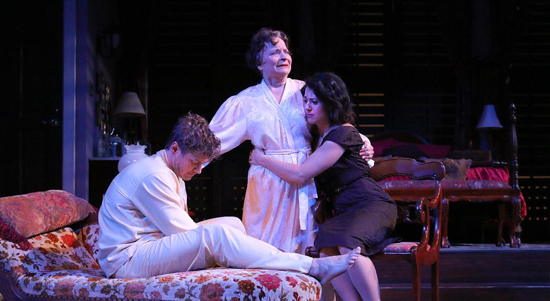 Arguably the most widely performed of Tennessee Williams’s play, and according to many, his personal favorite, Cat on a Hot Tin Roof is more rooted in reality and less in symbolism or the Gothic than some of his other works.

While it deals with such sad subjects as impending death (of the patriarch, Big Daddy, who has been lied to about his fate; sibling rivalry—over a father’s affections and estate; a friendship that ends fatally because of homosexual accusations, and alcoholism), k it isn’t as quite as devastating as, say, Sweet Bird of Youth or A Streetcar Named Desire.

Director Mitchell Hebert makes us see the yawning gulfs between the characters.

There is much humor, as well as intense emotion in the play, which exposes the secrets and lies—Williams colorfully prefers to call them “mendacity”–of a dysfunctional family who comes to terms with at least some of these challenges and some degree of reconciliation.

The center of gravity in Cat shifts in the three acts; they’re almost like three different one-act plays. But certainly, Maggie the Cat, as she is nicknamed, is the play’s most-memorable character. Lusty and loquacious, yet thoughtful and hurt underneath, she calls herself, “Not good, but honest.”

When Alyssa Wilmoth Keeegan walks onstage, there’s a moment of surprise—she’s not the obviously voluptuous Maggie we see in many productions. Yet, there’s something about the sinuous, self-confident way she moves that more than compensates. She is also believable in Maggie’s many and rapidly changing moods.

Gregory Wooddell has the right athleticism and good looks for Brick. His silences, a buffer against Maggie’s seduction attempt and feeling, are eloquent. I would have preferred less anger in his performance, but he is a credible drunk.

Rick Foucheux is more subtle and vulnerable than the overpowering Big Daddies we often see, like Burt Ives in the Broadway production and in the movie—and it works. His Southern accent could be a bit pronounced, but he wins our attention.

Sarah Marshall reminded me of Jean Stapelton (TV’s All in a Family but also theater), playing up the silly side of Big Momma rather than the poignancy of her loneliness.

As always, Todd Scofield is spot on as Gooper, the “rejected” son. While as avaricious as his wife, Mae, he has a few more layers that make us almost feel for him.

Marni Penning is appropriately shrill but conniving as Mae, who covets not only Big Daddy’s estate but also Maggie’s attractiveness.

Director Mitchell Hebert makes us see the yawning gulfs between the characters. What separates Brick, a former sports hero who drinks way too much and his ambitious but loving wife is not just guilt over his friend’s death or her sexual frustration. They are almost occupying two different physical as well as emotional worlds.

Verbal communication is not all that’s lacking between Big Gooper and Brick, his favorite son. They have always interpreted facts differently.

While the set design by Meghan Raham was opulent and lovely, as befitting that of a very rich family, it was disappointing that it remained unchanging throughout the entire play. But then, was that the playwright’s intention?

Clothing is less a point of concern in Cat than partial undress, since Maggie famously spends most of the first act in a negligee. But credit for everything goes to costume designer Ivania Stack.

In a play that covers a 24-hour period, the changes of time of day are critical. Lighting designer Andrew R. Cissna handles them effectively. Under the direction of sound designer and composer Christopher Baine, Blues music is integrated.

Lynn Watson was the dialect coach for a play in which Southern mores are clearly one of the characters.

First performed in 1955 and a winner of the Pulitzer Prize for Drama, Cat on a Hot Tin Roof was altered substantially 19 years later by the author. The often-revived play was shown on Broadway as recently as 2013.